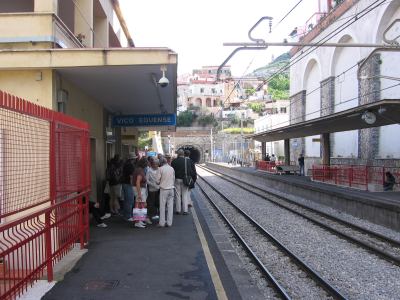 To the Sorrento coast for a week’s poking about the wonderful Greek and Roman remains around Vesuvius. But you don’t want to hear about that, you want to know how the Naples commuter railway system, (the “Circumvesuviana”), compares with ours. This is a hard one. For a start the system is almost entirely overground  and there are few of the branches and junctions that cause so much congestion on the Tube. We only used it on two days, from our base in the little town of Vico Equense to Pompeii on one day and to Sorrento the next. The service from Naples to Sorrento runs half-hourly, and the trains did come in bang on time. It’s a narrow gauge track and more reminiscent of a British Rail branch line, or perhaps the Docklands Light Railway, than the London Underground. The rolling stock is somewhat battered and graffiti-covered but there is plenty of room and a reasonable information service. Top marks for making announcements about incoming trains in English as well as Italian. And the fares? A dozen stops costs one euro.

So it’s cheap and cheerful, seems pretty efficient but perhaps does not deliver the frequency of service that commuters require. But a charming line for holiday-makers as it winds around the many towns that cluster on the lower slopes of Europe’s deadliest volcano. Everyone makes jokes on the theme of “So long it doesn’t blow before we head back to the airport, then that’s ok”. But it’s not that funny really. If ever it does blow up, then they say that there will be 3 days notice. The roads are jammed in Naples and the other town centres on an ordinary day. If two million people try to drive out of town at the same time, or even over this notional 3 day period of grace, then the resulting jams will be ghastly. From the look of it the railway would be of some help but only a little since there is a lot of single track and consequent reliance on trains meeting each other at the right point to pass. And once a train had got out into the safer countryside, what brave soul is going to drive it back into the potential path of a pyroclastic flow?

Finally, it seems that there was a heatwave in London last week. Shucks. It was a most acceptable 24c in Vico most of the week and the evenings were quite chilly as we sat on our hotel terrace and gazed out over the bay. It’s all in the timing, you know.
Posted by AnthonyG at 6:01 pm No comments: