I was wrong when I wrote last week that the strike called by the RMT union would cripple the tube from Monday evening to Friday morning. The strike finishes tonight so the tube should be back to normal tomorrow (Thursday) morning. And although it has caused serious disruption to normal services the tube is not crippled. Every line has run services today, (apart from the Waterloo & City) and the vast majority of stations are open. I was able to reach my drama group after all, although there were long delays, and the fortuituous arrival of a bus just as I exited Finchley Road station meant I wasn't late (but it needed a sprint to catch the bus, and that sprint began on the platform because I knew, thanks to my smartphone app, that the bus was only a couple of minutes away).

At least it was a beautifully warm and sunny day and sitting out on the platforms waiting for the trains was a pleasant enough way to pass the time. I guess retirement from the daily grind does have some consolations.

Amidst the castles and quaint old harbour towns of South East England, where Mrs. Commuter and I found ourselves last weekend, there was time to travel at the slower pace of the steam train. And when you see a gentleman of advanced years staggering out to work the level crossing gates behind which very patient local motorists are penned, or when your train halts for eight minutes to take on water, you realise why this is a form of transport unsuited to those in a hurry.

Leaving Rolvenden after watering
We travelled on the Kent and East Sussex line which plies the lovely valley of the Rother between Tenterden and Bodiam. First Class naturally (for the princely sum of £1 on top of the standard fare). You can stick your head out of the window and breathe in the country air (and the smoke). A pleasure the modern commuter can never know.

Down by the old canal

What better, on a warm spring day, than to stroll down the towpath on a canal, savouring the birdsong and the barges? This morning I did just that, walking the eight miles or so from Rickmansworth to Uxbridge along the Grand Union. A short distance out, amidst open countryside, I came across this strange hulk of a building. 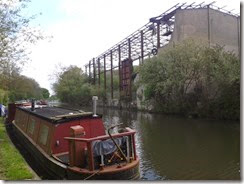 I have idea what this ruin used to be. The map shows no road leading to it and there are no other buildings or roads nearby.

This stretch of the canal is very quiet – only two barges were moving during my walk, although a handful of cyclists and other walkers were also out enjoying the sun. Here is another view

This is well within the M25 but could be anywhere in the country. The canal is fringed by many lakes designated as nature reserves and apart from the pinging bell of the overtaking cyclist, the loudest noises were the geese honking in the reed-beds and a swan thrashing its wings as it clumsily hit the water with a fountain of spray before it folded them back and stared at me as if to say “Who are you looking at?”

Chiltern Rail provided the transport to Rickmansworth and London Underground the return; both ran to time. Next week things will not be so smooth because the RMT union has called another major strike that will cripple the tube between Monday evening and Friday morning. Sod them. I have drama classes to go to in Belsize Park and the tube is the only sensible way to get there.
Posted by AnthonyG at 2:47 pm No comments:

Stone me - they've done it

As regular [Do me a favour: Ed] readers will know, if they recall this post, I keep my eye on the fortunes of two football teams. In fact I only bother to go to watch one of them, and I can now reveal that they are Wealdstone, who play just down the road from me, and that last night they were confirmed as champions of the Ryman (a.k.a. Isthmian) League by winning at Margate.

I started watching them in the 1970s when they had their own ground in the heart of Harrow. Sadly, this has long gone to become a Tesco store and the club went through many hard times in the 1990s before finding its current home at the Vale ground conveniently close to Ruislip tube. Although they were founder members of the Conference, effectively the 5th division of the Football League, financial problems forced the club to play at a much lower level for a long time and only now have they clawed their way back. Next season they play in the Skrill (a.k.a.Conference) South.

All the club needs now is a very rich sponsor, a sensible offer to Tesco (whose financial results announced this morning showed a further decline in profits) and all those years could be rolled back...well, you've got to dream. haven't you? [Some of us have work to do: Ed]

A year ago I had the pleasure of introducing a batch of incomers to the resident fish population of the little pond in the back garden. Sadly the hot summer proved too much for some of them and three of the newcomers, together with one old-timer, perished. But nature is bountiful. This week I identified three babies, two so black they are only visible in direct light and one with the same light pink markings that mark two of the adults.Very satisfying, and there may more lurking about. The neighbours may think I'm merely idling away the time by staring blankly into the murky waters but there is cutting-edge scientific research of the highest quality to be done and on nice warm afternoons I shall arm myself with a cup of tea and go out there and do it.
Posted by AnthonyG at 10:43 pm No comments: