Turn up the heating

I wrote a couple of weeks ago about the warm, almost balmy, weather that accompanied the two 4-day Bank Holidays. And I was right to highlight the unusual nature of the airs because today, at the start of our last such weekend until the end of the summer, the mercury has plummetted, the grey clouds have invaded from the west once more and a damp and chilling miasma is rising from the dank fields to nourish dark thoughts of gloom in the very soul. [He's trying to get some sort of poetry award. Humour him: Ed]. Still, it's been better than yesterday when the Atlantic emptied itself over London, followed by a spectacular rainbow. 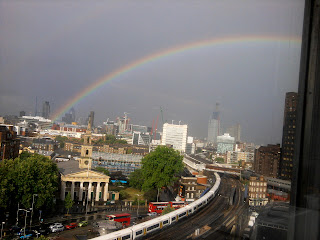 Not the End of the World

An insane "Christian", Harold Camping, predicted that God would begin destroying the world yesterday. In Ruislip, at any rate, the earthquakes were fairly mild, the great winds did little more than blow down a few rose petals, and the tsunami in our little pond merely disturbed a couple of pond-skaters.

How anybody can claim to believe in an eternal and omnipotent spirit of love and at the same time claim to believe that that spirit will destroy the glory of his creation is beyond my comprehension. But I wish I had a few of Mr Camping's moronic followers living nearby - I could have made a fortune buying up their property last week.

Some of these people are quoted as saying they managed their affairs so as to spend everything they had, based on the double delusion that the world would end and that they would be amongst those to be taken up. We have been here before - with the nutters who took to the woods in December 1999 believing that the millenium bug would end civilisation. I think God puts them on the earth to give the rest of us a good laugh. I mean - do you really think the world will end before the last matchday of the Premier League season?
Posted by AnthonyG at 10:57 am No comments:

Seems like the RMT strike planned for next week is off. Good. The problems it would have caused to Londoners, including your correspondent, were considerable. But another strike is pending on the Jubilee Line and Mr. Crow and his pals seems happy to down tools, fire up the braziers and loiter about closed stations at the drop of a ticket. They invariably talk about the management-union relationship. The tube-passenger relationship means nothing. There is something fundamentally rotten with a system where public sector workers can treat their paying customers with such contempt. Yes, there are times when the union has a good case and needs to defend its members. But there has got to be a better way than the general strike in which both sides lose something and the passengers, who have no say in the matter, lose as well.

My solution? To reduce my dependance on the Tube. I'll be working less this year and if that results in not going into town at all, no problem. No problem at all. [er, what about the future of this blog? Ed]
Posted by AnthonyG at 10:25 pm No comments:

The royal wedding bank holiday on Friday coupled with the normal one today has given us a two four-day holiday periods back-to-back. The weather has been perfect. Brilliant sunshine, plenty of breeze to keep the air fresh and the right hint of chill in the air to make a sharp contrast to the direct heat of the sun. Everything in our garden is bursting into life. There is so much natural food, larva and the like in our pond, that the fish have begun to disdain the food that I usually give them round about tea-time on warm days.

We are not used to such pleasant bank holidays. The one in May has always seemed to be the signal for icy blasts of cold rain and wind. Staying at home to read about traffic jams, floods and ruined holidays for others used to be our main source of pleasure at this time. Although I wonder where everyone has gone this year. Mrs. Commuter took the coach to Oxford yesterday and reported the M40 deserted. Perhaps people are simply staying at home and enjoying it.
Posted by AnthonyG at 6:22 pm No comments: