The End of the Affair

Today the British people abandoned the cause of European developement aimed at preventing centuries of hostile and competing nation states leading to militiarism turned its back on an outdated institution and regained its freedom.

The interests of British nationals elsewhere in the EU will be fully respected under the new arrangements and millions of workers and pensioners need not fear that their rights to remain, work and receive health care will be in any way jeopardised We have no idea what will happen to them or to UK institutions and businesses that employ EU citizens or which are interlocked with the EU institutions.

We will retreat into being a closed and xenophobic society in which foreigners can be freely blamed for everything, just as they are in Trump's USA we will continue to uphold traditional British values of liberty and tolerance, just not quite as libertarian and tolerant as before

If the eastern frontiers of Europe crumble under Russian aggression, lack of investment and a renewed vicious nationalism, and slide into Balkans style conflicts with barbed wire frontiers and deportations, it's nothing to do with us. We could have promoted British values in Europe. Now we can only fulminate on the sidelines

The UK will continue to be a United Kingdom with the whole-hearted consent of all of its citizens Bye Bye Scotland, all the best
Posted by AnthonyG at 6:18 pm No comments:

A man, a van and a pasty

A couple of years ago I considered the question "What makes a restaurant"; specifically, when is an eating establishment a restaurant rather than a cafe or a snack bar? I did not extend my research sufficiently far. For, whilst idly browsing on Tripadvisor for places on a forthcoming trip to Cornwall, the following caught my eye (and now it has caught yours, and it is fascinating, is it not?). 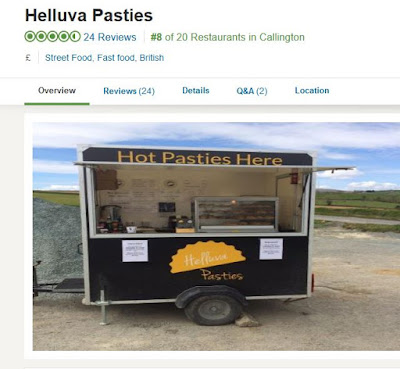 What grips the imagination is not just that a mobile van, selling only pasties and related products in a deserted car park in the middle of nowhere, can be ranked as a restaurant (or indeed that people have bothered to write reviews about it) but that it is 8th out of 20! There are twelve more eating places in this small town on the eastern fringes of Cornwall that are ranked below it. Is your mind boggling yet?

This establishment, which I admit does have some admiring reviews from local pasty-lovers, has the usual rankings 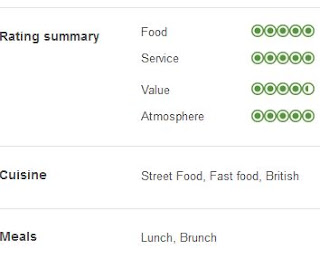 Since the only food offered appears to be pasties and similar filled snacks, they are presumably being rated compared to other pasty stalls, rather than, say, the 2 AA rosette establishment in town that is number 1 in the rankings. Fair enough. I wonder how you rate the service of a self-service snack bar?  Something like this, perhaps?

Value presumably extends to comparing the prices against other pasties. But what do we make of atmosphere? Rated very highly by those in the know, so it must be on these lines:

To keep the boggling process going, here is a little snippet on the TA site for reviewers to consider

I can imagine the inspector from TA (if there were such a person) brushing away a few last crumbs and striding confidently up to the man behind the counter.
"Good morning"
"Morning to you sir"
"May I enquire if your pasties, made as they are with the finest flour, are gluten free?"
"Aaar...mebbe. Mebbe not. There's them as knows and there's them as don'ts know"
"I see. Am I in breach of the dress code?"
"You're an outsider and we don't normally have truck with strangers and their strange ways. You're not a Revenue Man are ye? They don't last long round these parts"
"Umm,  might I let my dogs out on your patio?"
"Dunno. Are they from Devon? If so, they stays put"

Good luck with that report then.

** Update April 20th
Mrs C and I had a very pleasant week in Cornwall and, almost by chance, drove past the very site where Helluva Pasties does its trade. It is not really in a deserted car park in the middle of nowhere but located in a deserted car park adjacent to the main road between Callington and Saltash, and it was closed on the couple of times that we passed by. So I can make no further comment on the subject.

Exclusive: We did not spy on Trump

Ramblings  wishes to retract the story published recently that appeared to suggest that in some remote way this organisation may have been associated with a surveillance attempt on The World's Most Popular Man©. This allegation was wholly made up and pretend. However, as keen followers of TWMPM, we shall not be issuing any form of apology or explanation, other than the above. In fact, we shall go further. The story was undoubtedly created by our enemies, probably the so-called blog Investigations of a Itinerate Ickenhamite and nothing to do with us whatsoever. So there is nothing to apologise for and we demand an apology, and substantial compensation, instead.
Posted by AnthonyG at 9:31 am No comments:

Exclusive: We spied on Trump

Undisclosed sources, speaking anonymously to unidentified reporters within the Ramblings organisation have indicated the possibility, under certain extreme circumstances, that someone might, at some time or other, have asked someone else (nobody is saying who but their name might start with a 'D'. or 'K'. Or another letter) to look into the options of finding out whether it might be feasible, given a fair wind and a decent start, to review the contingencies contingent upon an investigation into the likelihood of finding out whether so-called President D Trump is actually a real president or just someone who gets photographed in the White House a lot.

This shocking disclosure has shocked everyone who has read and believed it and proves beyond doubt that if you say anything at all - no matter what - some dumb American is going to believe it.
Posted by AnthonyG at 9:28 am No comments:

In an "exclusive", the Daily Mirror (a news site I have hitherto overlooked, and how wrong I was) features a story that Paul Burrell, one-time butler to Princess Diana, receives regular messages from her in his dreams. Burrell, who has claimed to be the Queen's right hand man (move over, Prince Philip) and who somehow found a considerable amount of Diana's possessions in his attic after her death, (and how they got there nobody knows), may think that being the recipient of the thoughts of an ex-Royal makes him special.

I've got news for you, buster. I regularly have deep and meaningful conversations in my dreams with

Newspaper editors: All exclusive rights to this sensational story, plus loads of others I will happily make up report, can be yours. Apply to the address below enclosing SAE

Ramblings
Lies and yet more lies department
Fantasy House
Easy money for sod all Avenue
Gullible, Berks
Posted by AnthonyG at 11:42 am No comments:

If you use Google then you may be aware of its social media arm, Google+.  Although I take not the slightest interest in it, it insists of sending me little snippets of information from time to time, no doubt in the desperate hope of luring me in so I will switch my vast army of followers away from other similar offerings. Now you might think: this is the mighty Google, it knows all about my browsing habits, it knows where I live, it might even know my inside leg measurement, my taste in toothpaste and the number of goldfish out on the estate [pond out at the back: Ed] that have survived yet another winter of dark and freeze (all of them, as far as I can tell). And so, as you continue to ponder, assuming that by now you have not dashed off to something more interesting - and who can blame you?-  then you might assume that the snippets would be fascinating and topical, based squarely on the things that I want to know about and relevant to my fast-moving, contemporary lifestyle. Alright, you might not assume that because you may well know far more about the algorithms used to match snippets with lifestyles than I do but for the sake of argument let us assume that you would. In which case, wrap a few braincells around this nugget which popped up when I rashly clicked on the notifications button that told me there was something new waiting.

India huh? Bully for them. I admire the way the country is progressing and wish them well but see no reason why such a story should be pushed to me in preference to the myriad of other news items that are available. I have never been to India and have no plans to go, and fond as I am of the offerings of my local curry house, it is a Bangladeshi establishment.

What on earth is a hyperloop system? I mean, I know I write about IT matters now and then and transport matters (from a commuterial viewpoint) quite often, but this one has me stumped. Is it a theme park? Is it a giant shopping centre with a parking system designed by Ikea where you go round and round for hours looking for the way out until in utter despair you buy the first thing you see? Or is just, you know, an ordinary loop but a really slick ad agency has zooshed up the image to give it that "hyper" look so sought after by us urban trend-setters?

But it doesn't really matter a toss. Whatever it is, it's not going to be ready for at least three years and the cunning use of "could" means the whole thing may no more than a design on the back of an envelope already lodged in a bulging waste-bin on its way to the East Kolkata Municipal Garbage Works.

You might, I suppose, be thinking 'Why doesn't he just click on the link, which is, after all, recommended, and learn more, to his possible advantage?' There is a very good reason for my inert mouse-clicking finger. One touch and and a whole row of flashing lights will be twinkling on the servers at Google HQ. "Got him" they will be saying (in computer-speak), "He likes India, he wants to know more hyperloops and he cares about things which may or may not happen in the next few years". Every frivolous news item about anything happening east of Suez, however loopy, will be coming my way. I do not wish this to happen. The link will remain unsullied and I will continue to have not the faintest idea why a hyperloop in India, which may or may not ever get built, is of such concern.

Readers - do you have your own hilarious Google sent me a irrelevant notification story? Send them in to the usual address and you could win £££.

Terms and Conditions apply. By £££ we mean any amount between £0 and £2. The use of the word 'could' has been approved by the Advertising Standards Authority and Google+. The Editor is having a tea break but his decision will be final if he ever gets around to making one, which, quite frankly, could take a long time. Don't wait up.
Posted by AnthonyG at 10:00 am No comments: