10 years ago my home station, Ruislip Manor, had a refurbishment. On other stations electronic display boards show passengers the expected times of arrival of trains. In the days before smartphone apps put this sort of information at our fingertips, they were a blessing. I hoped that one of the improvements of the rebuild would be the installation of such boards and said so in this very column.

It took them three months after the rebuild but in a piece at the end of March 2006 I celebrated the appearance of the self-same signs. Three weeks later they switched them on and, as I noted at the time,  they showed nothing more than the direction in which trains ran, and they couldn't even get that right. But I thought it would be all sorted out pretty soon. By May I was becoming more cynical. In February 2007 the utter uselessness of the boards, which continued to display only the wrong direction of travel (and the time, to be fair) was taken for granted.

All the information about train movements, including on the Metropolitan, was made publicly available in  March 2009 and I celebrated this development by crediting London Underground. Of course the information was not displayed on the platforms at Ruislip Manor - the electronic signs continued to show nothing of any value. Why did they not hook them up the same data that was made available to any smartphone app developer? I have no idea. I returned to this theme a couple of weeks later.

Being able to use one's phone to check on train arrivals was, and remains, a pure joy for the experienced commuter. But it always irritated that LU refused to use the expensive equipment that should have been the primary source of such information. I had another go at them late in 2010. After that, as I began to commute less, it didn't seem to grate so much. And I suppose I had begun to assume that nothing would ever change again.

This picture tells the story. Apologies for the usual blurring caused by a combination of my cheap phone's camera and the gathering gloom of a late winter afternoon. But what does that matter? For the information boards are finally doing what they should have been doing 9 long years ago - giving us information! 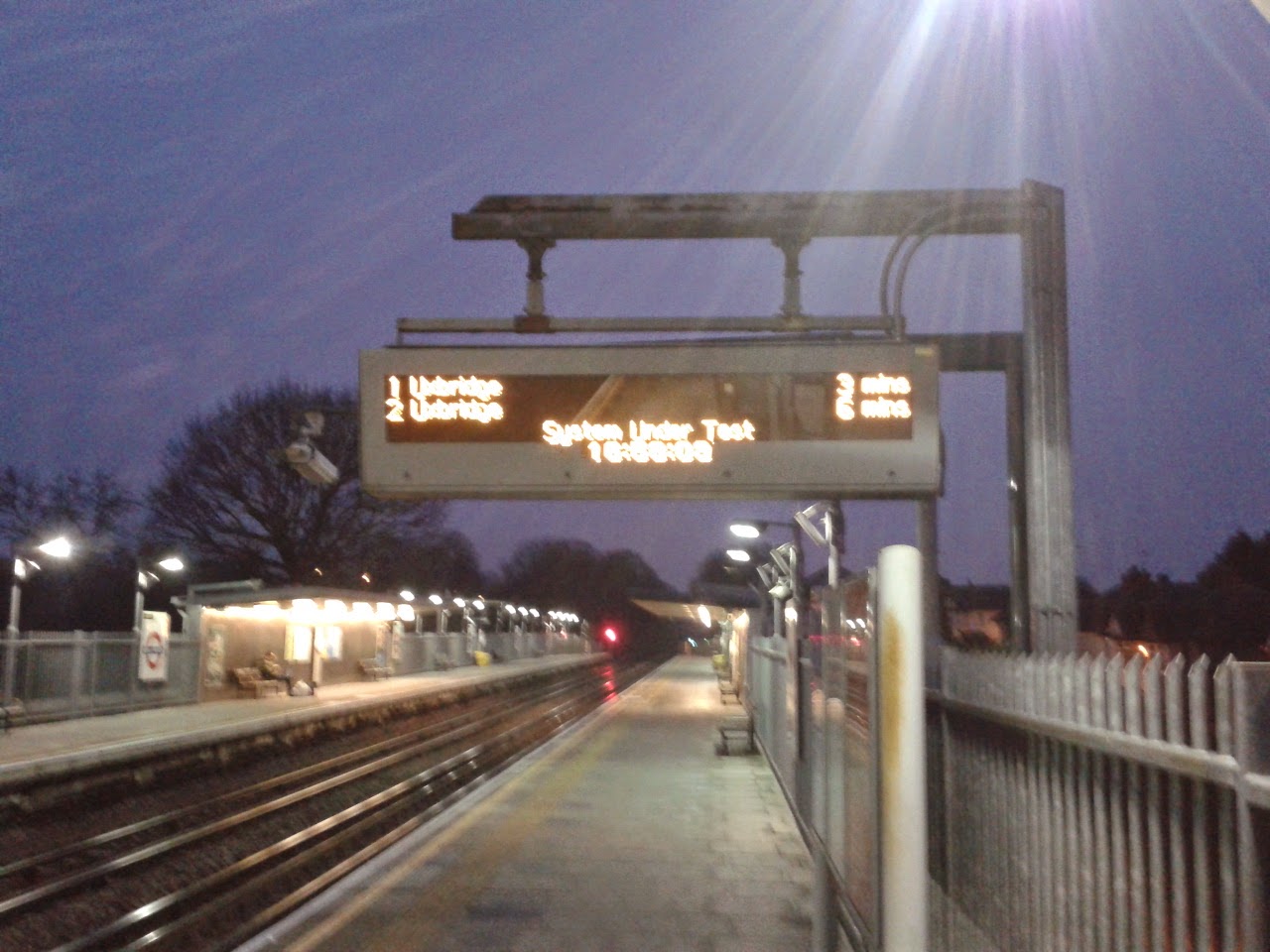 It does say "Service under test" and I noted that there were no signs working at other stations on the section up to Harrow (south of which they have been merrily doing their job for many years), so too soon to crack open the Bollinger but maybe a glass of weak lemonade would be fitting.

And not only that - for at the entrance to the station they have activated another long dormant display - this one showing the arrivals at both platforms. Another huge positive, though Waterloo tube station had one installed - and working - in April 2009, as I noted at the time, and of course most other stations have also had them for ages.

So, assuming that it all works once the testing is complete (and I have no reason to think otherwise), this brings a very long and frustrating period to a happy conclusion. How about that?
Posted by AnthonyG at 5:58 pm No comments:

Quite a good title for a straight-to-dvd horror film. But this morning I very nearly found myself in a bird vs. man situation. I was sitting peacefully at my desk, unaware of the peril that stalked just outside the house. My eye was half caught by the builders who are putting up an extension on my neighbour's house about 50 yards away. Imagine my surprise when out of nowhere a pigeon hurtled straight into my face - or would have done, had it not bounced off the window that separated us.

The window was undamaged. The bird flew away, no doubt sadder and wiser and wishing it had paid more attention to its flight path. When my heart had stopped thumping from the sight of a bird momentarily flattened to the glass not two feet away I penned these few words. All is now quiet in beautiful Ruislip. The birds are outside and we are inside. All except those builders working on the roof. Should I alert them? Are they trained to react to two pounds of daft columba palumbus zooming in out of the sun and whipping the very sandwiches from their cold, trembling fingers? We can only watch, and hope.
Posted by AnthonyG at 12:14 pm No comments:

I enjoyed a stroll along the Regent's canal and then through the park of the same name today. Wildlife enroute included the birds in the Snowden Aviary of London Zoo, a lot of geese of various kinds in the park, some puzzled looking gulls or terns wandering around the ice in the lake and a dead rat under a canal bridge.  Despite the overnight freezing temperatures, it was warm enough in the sun to sit out for a welcome lunch break (but not warm enough to want to to stay there once the hot coffee had been drunk).

I got there from Belsize Park following a U3A lecture (on supernovae and jolly good it was too) and had planned to go directly to Kings Cross. The Northern Line had other ideas. Unusually, all the southbound trains were going via Charing Cross. Changing at Camden Town did not produce an improvement and the next train to Euston seemed the best bet so I returned to the platform I had detrained at (because you have to walk into the corridor between the platforms to read the information boards to find out what services are running) and there I was bemused to see the tail lights of the train I just quit stationary in the tunnel leading towards Mornington Crescent. It remained there for a while. After it moved the train behind came in. We also stopped outside Mornington and waited for several minutes, the driver pleasantly informing us a couple of times that "We should be on the move shortly".

I have no idea what was congesting the Charing Cross branch or why they were not running them via Bank instead. But it meant an unplanned route march along the always-congested Euston Road before I could reach the intended part of my walk.

January has been pretty good to us, so far. Last year we had enough rainfall to flood huge areas of the country. This year it is above average but not massively so. Until this weekend it had been cold but the snow flurry on Saturday (it only lasted a few minutes) was the first this winter and may well be the last. I speak of beautiful Ruislip, of course. Up north they've had some rough stuff but then they usually do.

It is my duty, as a historian and commentator on 21st century urban living in the NW London context, to record the dreadful weather event that gripped the nation yesterday in a maelstrom of excitement and jaw-dropping awe at the fearful power of untamed nature. [Great start, keep it up: Ed]

There had been lightning strikes to the south west for a while, over Windsor and Slough and I was tracking them on the excellent Lightning Maps real-time website as the storm moved slowly in our direction. Around 12:45 with the sky blackened by thick cloud there was a strike seemingly almost overhead (which Lightning Maps showed as centred on the woods about half a mile away) and then driving rain and a hailstorm that covered our conservatory roof in a layer of ice. It stopped within a few minutes and was replaced by clear blue skies and brilliant sunshine. It seemed the worst was over.

But for the good folk of our neighbouring borough the nightmare was only just beginning. The storm shifted eastward, gathered its strength and like a militant trade-unionist, struck. [erm, perhaps, like a great white shark or a panther would be a better metaphor: Ed]. OK, anyway, undoubtedly boosted by the latent heat of the suburbs the storm became a veritable tornado and, thanks to the Evening Standard (not to mention the snappy responses on Twitter), the chilling results of its trail of destruction and mayhem can be seen.

Let us hold back no longer and reveal the full scale of this wind-borne assault on London. A garage, that looks from the pictures as though it was about to collapse anyway, was laid low.

The people of Harrow have my best wishes as they grapple with the aftermath of this catastrophe. We stand united with them. The garage, surely, will be rebuilt to the very last crumbling breeze-block and cheap roof beam.When they set up the Restore The Harrow Lean-To Fund I urge you to give all you can. A better, finer, Harrow shall rise from the ashes.Thank you.
Posted by AnthonyG at 10:05 am No comments:

An ad for Coca-Cola in my morning paper invites us to link the oversweetened narcotic highly addictive drink with the word "Happiness". Coming from the company that has single-handedly done more to promote obesity throughout the world than any other organisation, this was enough to have made me choke on my breakfast cereal, had I been eating one at the time.

But what bemused me was the display of two products. Zero Coke, we are told, has zero calories and zero sugar. Diet Coke, on the other hand, has 0 sugar and 0 calories. I don't drink Coke in any form, as you must have gathered by now, but if I was considering it then my dilemma would indeed be grave.

I think it was the Greeks who established that if a = b and b = c then a = c. Now there are some branches of maths, possibly relating to quantum theory, where this is not so and it is the order in which you add things that determines the outcome. We can probably pass over this complication and stick with Pythagoras and his chums. Zero calories = nothing. 0 calories = nothing. What on earth is the difference between these two drinks? Neither contain any calories or sugar. They are both based on the same formula (I assume). Anyway, if they do taste different for some reason, this is not disclosed in the ad which merely informs us about their calorific and sugarific [Is this a word? Ed] contents.

So let's imagine that I did wish to enjoy a cola based soft drink. Say I've been doing a cross country run - in Morocco - during the summer - carrying 30kg of rubble on my back - wearing heavy clothes and boots - through a sandstorm [OK, OK, enough "it's thirsty work" imagery: Ed] and I stagger into a cafe and ask for a cold drink and the owner, resplendent in his robes and fez, gestures toward the cabinet containing two frosted cans. One Zero and one Diet. I'm keen not to intake any more calories or sugar than I have to. Which, gentle reader, do I choose? Or do I just stand there, sweat puddling at my feet and small children gathering at the door with their hands over their mouths, in an agony of indecision. Both will make me happy. The advertiser has told me that. But which is best? I have no idea. Zero in one direction, 0 in the other. Where is Bertrand Russell when you need him?
Posted by AnthonyG at 9:51 am No comments: