The beginning of the end

This week I will have travelled to work for four days, my normal pattern since last summer when I cut down from full-time. Next week it could be three and by the end of August two (or maybe even one). For, having reached a respectable age, and with a new appointment in my firm who is steadily taking over the greater part of my work, I am able to move into a state of semi-retirement. What, you will be asking [I certainly am: Ed] of the future of this blog, founded as it is on the depiction of everything commuterial? (is that a word? [it is now: Ed]. My mission has been to describe the everyday journey so that historians from some future age, when robots do everything and humans loll about all day playing 4-D computer games, can marvel at the primitive and barbaric nature of our "civilisation". Now how can I hope to continue to grip the attention of these unknown scholars if I cease to be fully immersed in the cut-and-thrust of the daily challenge that is Tube travel today?

This needs thought. I'll get back to you.
Posted by AnthonyG at 2:54 pm No comments:

A crush on the Bakerloo

I am used to the Bakerloo running full (if not over-full) trains during the morning and evening peaks. But as with the Met, one might expect the trains at weekends, and especially on the fringes of the line, to be less congested. Not so. Last Saturday Mrs. Commuter and I took ourselves to be overwhelmed by Kevin Spacey's performance in Richard III at the Old Vic. Weekend engineering work forced us to take the Bakerloo starting from South Kenton. This little station, dominated by the high speed mainline services up to the Midlands, is but two stops from the terminus at Harrow & Wealdstone. No problems, we thought.

Wrong. The first train to arrive was so full we did not board. The second, about five minutes later, had a few seats available and was fairly full all the way in. Coming home we obtained seats at Waterloo and, although this was an early evening Saturday, nonetheless, just like in the normal working week the train filled at Charing Cross and remained almost oppressively full until Wembley. Ah, we thought, everyone is going to a concert. Wrong again, plenty stayed and were still there when we disembarked. Where on earth were they all going? On to Watford to celebrate closing-time in the Harlequin Centre? Was there some amazing street event in the dull terraced streets of Wealdstone that had passed us by? We may never know [or indeed care. Ed]
Posted by AnthonyG at 10:18 pm No comments:

How thick can you get

My firm has its incoming email scanned by a specialist computer company and they make a very good job of identifying spam. We still need to check what they have blocked because now and then genuine mail gets blocked. And so it was that this afternoon I found in my junked email list the following remarkable mail. We only see the subject line and have to click to read the body but obviously my correspondent was wise to this and so stuffed the entire contents of their email into the subject. Therefore the header of this missive reads as follows:

Greetings to you dear beloved friend in the lord, I am Mrs Jean Jackson a widow to late mr Williams Jackson. I am 58years old ,from neitherland, a retired accountant. I am presently in the hospital with my laptop suffering from cancer of the larynx and th

It cuts off with that poignant half-definite article (or is it thence? or thus?) because there is a limit on the size of the subject. I was already reaching for my chequebook, my heart wrenched at the thought of a laptop suffering from cancer but now I will never know what other affliction has beset this innocent device. For there is nothing in the body of the message at all other than a plaintive Please get back to me.

I don't think I'll be bothering, Mrs Jackson, I think they have excellent facilities in the neitherland (or should that be the neverland) but do beware of ticking crocodiles and villainous one-handed pirates.
Posted by AnthonyG at 2:44 pm 1 comment:

The trouble with any tube line with branches is the tendency to a lack of balance. Tonight, on my homeward journey, I took an Amersham to Harrow, hoping as usual to catch up with a slower Uxbridge. No chance, not even a sign of one leaving as we came in, even though we had made very good time up the fast track from Wembley Park and we were supposed to be just behind one. Then in came not one, not two but three Watfords. The last was so delayed getting away that the driver made a point of announcing that his train was "finally departing". And still we waited for an Uxbridge.

Now I will admit that there are times that the Uxbridges are thick and fast leaving the other branches bereft. Which only opens up the obvious question - why? Why can't the service run roughly equal numbers? What is the point in scheduling, assuming they were scheduled, three trains to run up one track at five minute intervals while an announcer tells us, with obvious joy, (or at any rate a total absence of apology) that the next train on the other branch is 14 minutes away? Oh, and inevitably, tells us that a good service is running. And given that the Uxbridge frequency is a train every 6-7 minutes, as you can see from the screenshot from the TFL site, I fancy a hint of apology would be, shall we say, appropriate. 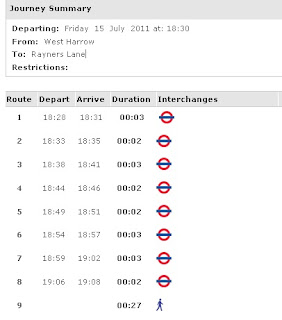 When I am king I will put passengers in charge of deciding whether the service is good or not. That should sort it.
Posted by AnthonyG at 11:00 pm No comments:

Postcript or Stuck in the Back of beyond

Earlier today I wrote lightly about a circular email sent by the Met's general manager, one Angela Back. It lauded the new trains coming into service this year. So how ironic that on arrival at Harrow tonight aboard a fast Amersham, and hoping to continue my journey to beautiful Ruislip merely by crossing the platform to a waiting Uxbridge, the plan failed fully and irrevocably because the said Uxbridge was a shiny new S stock and it was being taken out of service.

So I joined the large throng of people expelled from the stricken train, swelled by others leaving the Amersham and not long after another hopeful bunch as a semifast Watford slid in. The next Uxbridge arrived, we jammed in and set off on our merry way. Or so we thought. Soon after leaving West Harrow we stopped in the middle of no-mans-land 'twixt Harrow and Rayners Lane. And waited. and waited.

Eventually our driver told us he had obtained permission to pass a presumably stuck red signal, the train lurched forward, the brakes came on, he released them and we proceeded at the statutory 10mph to the next signal block and then all was well. And somehow my 55 minute journey had taken 80 minutes.

I received an email today from Angela Back, General Manager of the Metropolitan Line. And before you nod admiringly and chalk me up in your estimation, this was a round robin. The curious thing is not therefore that Ms. Back should communicate with people registered to receive emails from TFL but that her message begins thus:

I am writing to let you know that new trains are being introduced on the Metropolitan line for the first time in 50 years. The trains are fully equipped with air-conditioning, walk-through carriages, improved customer information and CCTV for safer journeys.

The first of the "S" stock trains began trials in the spring of 2010 and additional units have been introduced to service regularly since. Regular readers of this blog [here we go again: Ed] will know that I have written about them on a number of times, my first mention being here Alas, Ms Back is clearly not numbered amongst those who value these little jottings. But where has she been for the past year? Anyone who travels regularly on the Met will be fully aware of the new trains - they will have seen them even if they have not yet had a chance to travel on one. I suppose the email may be aimed at people who, though they do not travel regularly (or hardly ever, in fact) but who still wish to keep in touch with the old firm, in the same way that emigrants keep in touch with the folks back home. Well good for them but I do find it a bit dispiriting to be given "news" about something I and plenty of other commuters know all about.
Posted by AnthonyG at 1:33 pm No comments:

Monday morning and the Met had delays (due to an earlier stalled train, according to our driver) resulting in congestion on the southbound track into the City. I faced the always fascinating dilemma* - to cross the platform at Wembley Park and take a Jubbly - with a strong chance of having to stand all the way - or remain on my motionless Met and hope that the signals would clear. I stayed put, we moved off and I think we more or less kept pace with the little train to our right.
Tuesday morning and again there are delays. This time as we arrived at Wembley Park on the slow line, a fast train pulled in alongside. Usually they move off first but this one disgorged its load and a lot of obviously disgruntled commuters raced over the bridges to join us. Except that just as the first of them were hot-footing down the last steps, and with exquisite timing, our train shut its doors and moved off. As we were already pretty full, this was not as heartless as it may sound, but I bet there was some strong language in our wake. Today's reason for another wasted 15 minutes was a person under a train at Farringdon. That was our driver's version. Or, for readers of the TFL website, a person taken ill on a train at Farringdon.
I also had the odd experience, when I boarded the train in the first place, of sitting down with a group of people around me and instantly knowing that they were travelling together and were unfamiliar with the train. There were about half a dozen men and a woman. The men were all wearing jackets but not ties but one or two carried suitcases (not the luggage type, the type you fold up a suit into). They talked about insurance using the language of insiders and were obviously going to a conference or sales meeting, or maybe a company do, near Liverpool Street. I fancied that they had driven up from somewhere like Swindon and parked at Hillingdon (though taking the train to Paddington would make much more sense). The train terminated at Baker Street and no doubt I will never see them again.


*not everyone finds this quite as gripping. put more sex in if you want a wider readership: Ed]
Posted by AnthonyG at 10:11 pm No comments: