I've been caught up, from time to time, in delays on the Tube caused by a person falling under a train, or in tube-speak a "one-under". These are usually suicide attempts rather than a dreadful consequence of platform overcrowding or a murderous attack. Yesterday I came much closer to one than ever before, though I hasten to add I was not actually in the station when it happened. I was walking back to Finchley Road station in mid afternoon to catch a northbound Metropolitan and saw, as I walked up the road, firstly a considerable traffic jam, then a row of emergency vehicles outside the station and finally the inevitable closed metal gates with a couple of grim faced Tube staff standing on guard.  As there was nothing to say what the problem was, I asked. I was told that it was a person under a train, that the Met was suspended but that the Jubilee was running normally and that the best thing was to walk to Swiss Cottage to board one. Advice I duly took and as our train came through into Finchley Road there was a Met stopped just inside the platform, with a big canvas screen between the train and platform, and emergency crew standing on the tracks.

Having watched the recent BBC TV series "The Tube", where there was plenty of coverage of such incidents, I had some idea of what was going on behind the canopy and that the need to turn off the power would screw up the Met for the rest of the day. And my journey was completed with the aid of the 114 bus from Harrow, there being so few trains running it was not worth waiting for one.

Seeing for real all the paraphernalia surrounding the one under was a bit of jolt. Somewhere in the welter of blue flashing lights and visibility jackets was a person, whether dead or severely injured I don't know.  It's a reality that severely disturbs the familiar - and safe - routine of the daily commute.

Posted by AnthonyG at 5:47 pm No comments:

They're smarter than we think


Escaped wallaby caught using huge fishing net after it swam off island on Scottish estate
But what was the wallaby fishing for?
Posted by AnthonyG at 7:00 pm No comments:

To the border country of Shropshire, Brecon and Hereford for a few refreshing days away. The petrol tanker drivers postponed their threatened strike and our motoring was not curtailed, as I been fearing it might have to be, when just a few days earlier 3 out of 4 local petrol stations had run dry. Yet the only petrol station in Ludlow not only had no petrol but mournfully informed me, when I phoned to ask if they had supplies, that they were closing for good. A sign of the times, and modern archaeologists may find deserted forecourts and the foundations of pumps and canopies all over the country; no doubt some future experts will ponder the strange rise and fall of these Gasoline people and their penchant for building their temples near to main roads. But I digress.

The marvellous, albeit dry, weather of the past few weeks went out with a bang as blizzards and strong winds battered the north, and plenty of it reached further south. Here are the Brecon Beacons topped with snow just a couple of days ago. 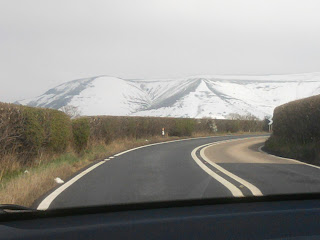 And now we are home and as is traditional for the Easter bank holiday, it is chilly and has been raining a fair bit, the first decent rain for some weeks.  And just as well because with a hosepipe ban now in force, I am dependent on the rain to fill my water butts from which I can top up the pond. I think it will be a poor year for the frogs, alas - the frogspawn is small and there is not much sign of the life from the little black occupants yet.
Posted by AnthonyG at 5:06 pm No comments: