Mrs. Commuter drew my attention to this lovely sunset - the photo doesn't reproduce  all the vibrant colours but I think it marks a nice end to the day. Especially as I wasn't working today. 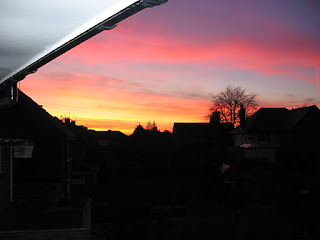 Posted by AnthonyG at 9:45 pm No comments:

The People and the Union

Let us leave matters commuterial alone for a moment and consider the fascinating constitutional crisis that is threatening the continuance of the United Kingdom.  Though united through the person of James VI of Scotland (and I of England) in 1603, the two kingdoms were separate states until the Act of Union in 1707. During the hundred years of shared monarchy there was open warfare in the Bishops' Wars 1637-40 and the vicious internecine strife of the Civil Wars. The union in 1707 did not prevent the Jacobite rebellions of 1715 and 1745 but rapidly afterwards the two kingdoms did indeed seem to become a truly united kingdom. Now, with the Scottish National Party threatening a referendum on independence and the intervention of the Prime Minister, and others, to force their hands, we may be in living in times that will see a reversal of 1707.

There is much to draw on from history, though it seems unlikely Mr. Cameron is aware of it. The Scots have always reacted instinctively against anything seeming to emanate from England. They remain convinced that any policy drawn up in Westminster must be a conspiracy to do them down. It was certainly thus in 1637 when Charles I tried to force his particular brand of religion on to his mainly Calvinist subjects north of the border. The resulting struggle kicked off the "English" Civil Wars and Charles lost his throne and his head, ironically at a time when the Scots were more or less fighting on his side, having decided that the King they knew was preferable to the Cromwell that they were scared of. So the lesson for Cameron is to keep schtum and leave it to the many Scots who oppose independence.

As to the referendum itself, we will watch with some interest the machinations of Mr Salmond, leader of the SNP and one of the most arrogant politicians this blog has had the pleasure to follow. He is currently declaiming that the decision is for the "Scottish people" alone. I would love to be able to propose a referendum on whether Scotland should be permitted to remain in the union that would be put to the voters in England, Wales and Northern Ireland - but not in Scotland - and see what Mr Salmond would say to that. I fail to see why he can choose whether to be in a club but the other members have no say on his membership.

In addition, the word "people" may trip him up. Just who are the Scottish People? Those who live in Scotland or those of Scottish birth? Many Scots live abroad (some even in England, believe it or not). Do they get to vote? How, if they are on the English electoral roll? And if they do, where is the line to be drawn? And why should, for example, a rich film actor or racing driver who chooses not to live in Scotland so he can avoid paying taxes to the Scottish treasury, be entitled to vote? If you have a Scottish father and an English mother and you live in England, are you part of the Scottish people? Huge numbers of Scots emigrated to the USA and Canada in the nineteenth and early twentieth centuries. Are their descendants Scottish? And if you live in Scotland and are registered to vote but were born elsewhere and retain the nationality of your birthplace, as do many migrants from the EU, then do you get to vote about the future of Scotland? What about emigrants from Hong Kong, or from the Commonwealth? If they have become citizens, then they are citizens of the United Kingdom, not of Scotland.

There is so much here to trip up the SNP that I have no doubt they will duck the question altogether, wrap themselves in a tartan banner and a subtext of "We hate the English bastards" and wait for the anniversary of Bannockburn.
Posted by AnthonyG at 2:41 pm No comments:

This morning, with impeccable timing, as I was about to go to work for the first time this year, my Freedom Pass arrived. At a stroke my expensive journey into London from beautiful Ruislip ceases to cost me a penny. Had legislation not recently changed, I might have received this invaluable piece of plastic when I turned 60 but alas, the qualifying age is up to nearly 61 and future generations will have to wait longer still.

There was something deeply satisfying when I first presented my gleaming new card to the yellow button on the entrance gate at the station, a bit like a flower breeder mating one rare orchid to another [eh?: Ed]. The tiniest of pauses while the system thought about it and then the magic moment when the gate opened. Yes, it worked. I have joined the ranks of the travelling pensioners, or whatever they call people of a certain age who can swan into a station or onto a bus any time they choose and go wherever they please and as often as they like and they can't touch you for it.

There are a few stations and bits of line I rather fancy visiting. Some of them because they are so distant, some because, well, quite frankly, it's hard to believe in them*. Upney. Canning Town. Mudchute. Penge. The eastern end of the Central. The southern bits beyond New Cross. My head tells me they exist but my heart says, Prove it!  So one fine day in the near future I shall pack my thermos and my marmalade sandwiches, check that the Freedom Pass is ensconced [is this right? Researcher!: Ed] in the right-hand jacket pocket and the entire Tube system, not forgetting the Overground and the DLR, will await me.


*of course, I accept that the denizens of these benighted regions might feel the same way about some of the more obscure parts of the Metropolitan. Except that they would be wrong.