Poppies at the Tower

The moat encircling the Tower of London has been filled with poppies to commemorate the British fallen of World War 1 - some 880,000 hand-made ceramics that sweep almost the entire circumference of the Tower and provide a vivid contrast to the ancient grey walls. 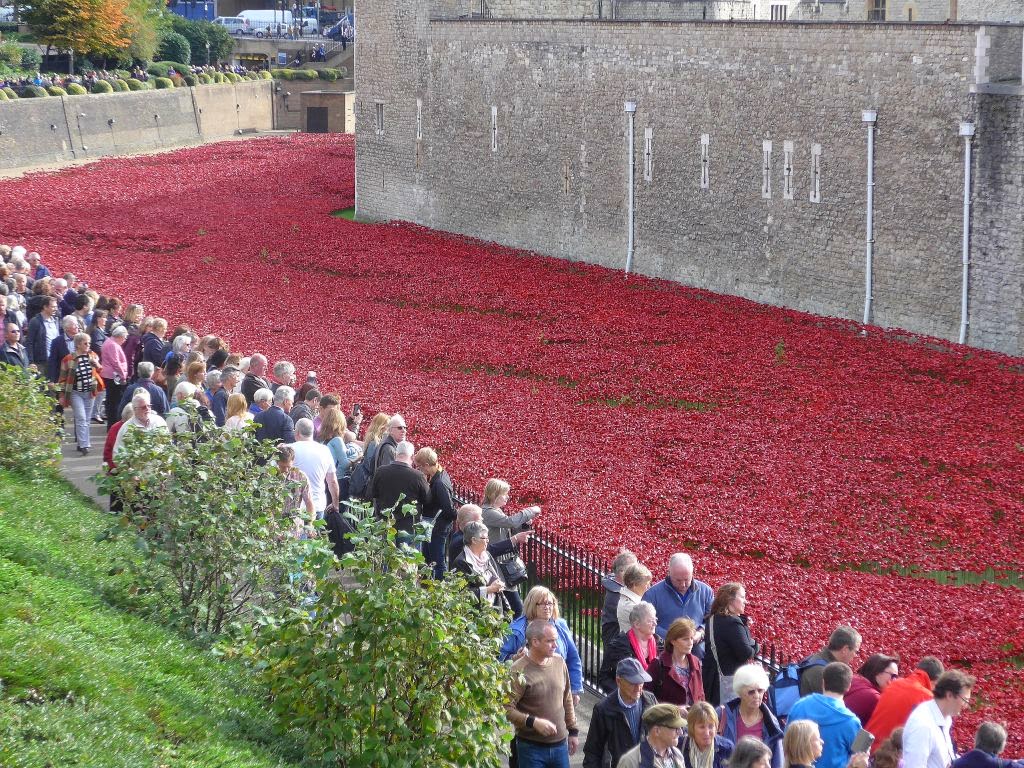 Mrs. Commuter and I joined thousands of others at the site this morning. There is no glorification of war or any attempt to justify it or dress it up in patriotic robes. Simply the field of poppies. A gaping hole was cut into the youth of our country and it is numbing to try to grasp that each poppy stands for one of them. 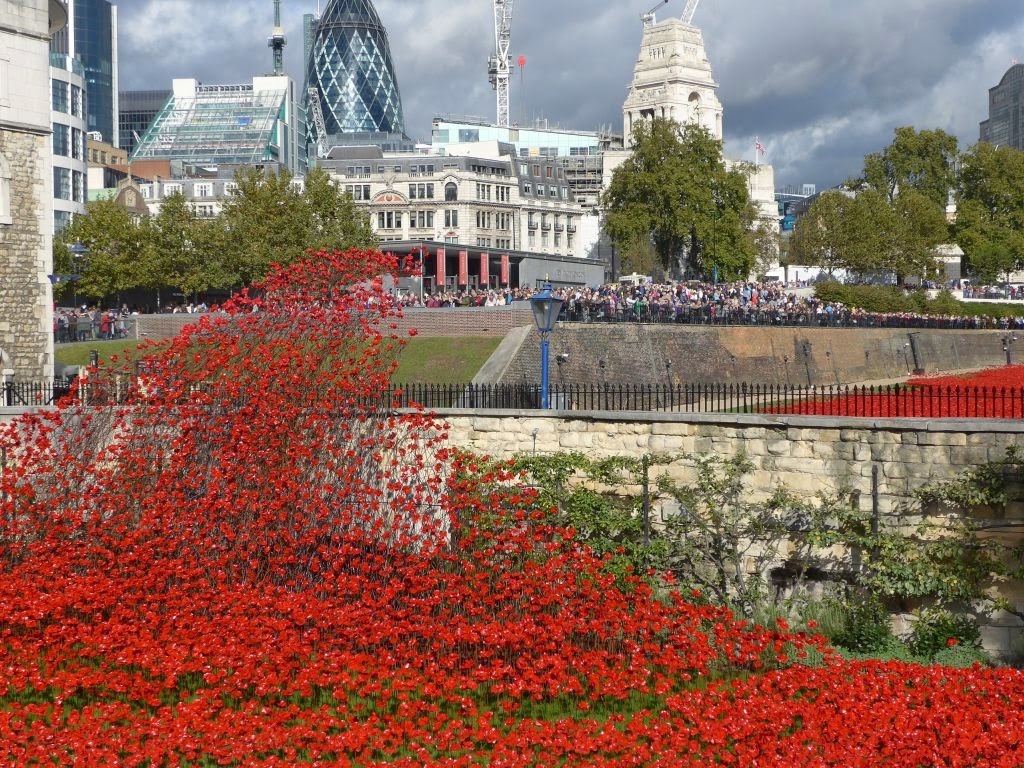 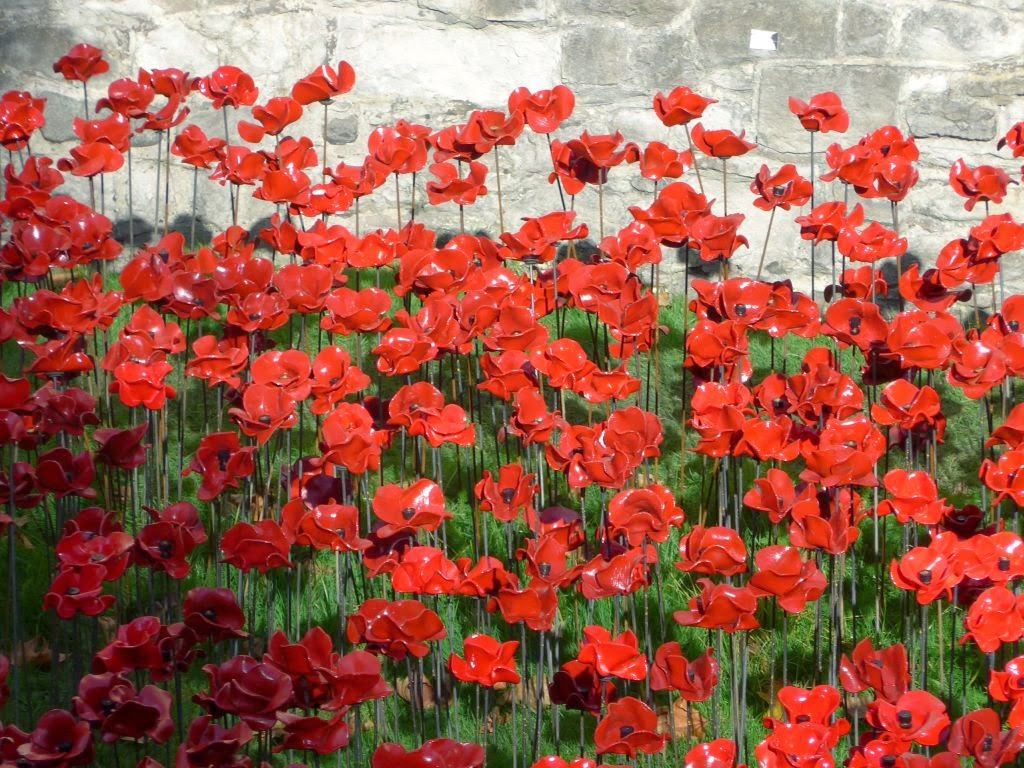 Posted by AnthonyG at 3:25 pm No comments:

A book review in the paper I idly perused at the weekend, as one does over a pleasant lunch in the conservatory on a mild Autumn day, suggested that clichés have a useful role to play in conversation. Rather than shun them, they should be embraced as making it easy to mark changes in the direction or tone of a discourse, and provide convenient pauses between the useful content. And having digested this message, I passed on to more important matters, namely the completion of the quick crossword.

This morning, flicking through the weekend colour supplement of that same newspaper, I read an advert for John Lewis featuring a woman’s account of dealing with insomnia [Must have been gripping stuff: Ed] and encountered the phrase – “it hit me like a ton of bricks”. I started, and stopped in my tracks, [Now then, now then: Ed] because that earlier book review was still in my mind and now I could not remove the mental image of someone actually being hit by a ton of bricks.

What on earth would it be like? How would you manage to be in a position where you could be hit, anyway? The most likely scenario I could come up with has to do with being on roller-skates, hurtling down the street and failing to avoid a building site. In that case we are hitting the bricks. This is not helpful. The crucial part of the imagery is that the bricks hit us. We are passive and the bricks are actively hitting. So it must be that the bricks are in motion. Perhaps a pallet, swung high above our heads as we walk blissfully unaware past another building site (or it could be the same as the first one above). But then, should that pallet fall, it would be the pallet that would strike and the bricks merely provide the ballast. I should think being clobbered by a pallet would be bad enough, especially if one hears the cries of the builders (probably in a gentle Irish brogue) advising us to “Look out there for the love of God, why don’t you” or whatever it is that Irish builders (Not really a cliché, there’s loads of them where I live) would shout in such a situation.

How can it be that we are struck by the bricks themselves? I fancy that the builders from the example above, have, in a distracted moment (“Whist, would you look at the legs on that, Michael, that would do me very fine”) lowered a pallet loaded with the afore-mentioned ton of bricks (The average house brick weighs about 4.3 pounds, a man from the interweb informs me, and a British ton being 2240 pounds, then this load comprises about 520 of them) on top of a trolley positioned at the top of a hill that leads down to the street where you are strolling, eyes fixed on the estate agent’s windows. The trolley is unbalanced, it begins to run down the hill, the weight of the bricks keeps them together, it hurtles out of control and strikes a bollard. The bricks fly off the pallet and as one great red mass obliterate us in a storm of dust, with chips splintering off the windows and faint cries from above “Jeez would you look at that, now we’ve got to pick that lot up before the foremen gets back from his tea”.

Yes, that would be how one might be struck by a ton of bricks. As to what it is like, well, pretty rough, I imagine. Being pulped and flattened and generally pulverized must be about one of the worst feelings in the world. Would one survive the smash? I very much doubt it. So the feelings on being hit by a ton of bricks must be (and these happen pretty fast) what’s that noise? Ouch that hurts, Hell there’s loads of them, This looks pretty bad, This is pretty bad, Goodbye world.

So when something is like being struck by a ton of bricks, it is like being crushed to death in a cataclysm of noise and terror. Pretty serious stuff. Hard to see quite how our lady (Remember her? I mentioned her earlier) could really think that her experience was similar to that. Her use of this cliché, far from oiling the wheels of the piece, as it were, puts a spanner in the works [Cough!: Ed]. Being hit by a ton of bricks is not really like anything else at all. Apart from being hit by a ton of flour or potatoes or anything else that might detach from a moving load and strike us. I’d say the odds on it being like anything at all recognisable are like finding a needle in a haystack. That’s a straw-coloured needle, made of straw, and the haystack is 100 metres square and 30 metres high.
Posted by AnthonyG at 3:43 pm No comments:

No, not a run on the pound or desperate defensive measures by the Bank of England. The story gripping the nation this morning concerns a young football player who, on the eve of a European Championship qualifier against Estonia asked to be stood down because "he was a bit tired and had had a late night and eaten too many pies because some of the older players had taken him to a fashionable pie bar in Tallinn and he hadn't wanted to look weedy so he went for the dreaded beef, eel and oberwurst special and anyway his mum has written a note, and it wasn't fair because some of the bigger boys had nicer coloured boots than him and his were new and hurt a bit, and his socks kept falling down because the garter elastic his aunt had sewed was coming loose and he had a headache and the champagne on the flight must have been a bit funny because after two bottles he didn't want any more...".  Ah. Bless. Early night, son and take the rest of the week off. You only get paid a few million a year for playing 90 minutes of football a week. God knows it's not enough and, on behalf of the supporters who watched the game on TV at home and found other things to do after twenty minutes rather than put up with any more tedium, get well soon.
Posted by AnthonyG at 9:33 am No comments: