There's always one, isn't there? A few years ago we featured the bloke who has to stick his head in a bin. That should have been enough to warn off the rest. It didn't. Now we have the bloke who sits on a kid's swing and gets his fat arse stuck in it.
Still, it only took the experts three hours to shift him, using the most advanced technology available:

When a "shove and pull" method of swing-release failed, the fire service arrived with a trusty screwdriver.

I don't suppose they do a lot of "release large objects from small containers" training days in the fire brigade. Perhaps they should have put a high pressure hose on him and fired him free in a jet of icy water. And his stupid backward facing baseball hat.
Posted by AnthonyG at 11:41 am No comments:

You'd think they'd have learned by now. But no. Every time England play anyone in a football tournament, any fair assessment of their chances go out of the window and is replaced by a wild optimism worthy of the most swivel-eyed Brexiteer. This time the culprit is newly-appointed captain Harry Kane and, in the finest traditions of those to whom history is about Henry VIII chucking chicken legs over his shoulder, he has declared that victory is the goal. But that is not all. Tottenham Hotspur's star striker has nailed his colours very firmly to the mast.

I believe we can win it - anyone can. I cannot sit here and say we are not going to win it because we could do ... Anything else is not good enough

Them's fighting words, Mister. Anything else, eh? Should England qualify for the final (imagine it, actually being in the final, we've not been there for 52 long and miserable years) but not win then Harry will have failed by his own words and even though he might have scored some memorable goals, led his team to trounce others much more favoured to win and demonstrated a pride in his country's cause that would make every true-hearted Englishman rise to his feet, he will nevertheless stand down, flee shamefully back to the airport and arrive home with a blanket over his head as grim-faced minders whisk him away to an unknown destination. Or at least, that is what his words strongly imply. Not winning is not good enough.

Far be it from me to be unduly sceptical about England's chances (although I was pretty damn accurate in predicting our performance in the 2014 World Cup and not far off it 2 years later in the Euros) but I cannot help thinking that our 'Arry has let the pressure get to him. This is what he should have said

We know how to do back passes. We know how to hit the ball effortlessly to the heads of the opposing backs. We are unrivalled at crossing the ball to a man who arrives two seconds too late to make contact. Let us go boldly out and the show the world we can DO IT AGAIN. My target is to make the last 32. Anything else is not good - what? We've done it? Brill, I can stand down with my dignity intact, job done.

Posted by AnthonyG at 8:32 pm No comments:

The weekend that is reluctantly drawing to a close today has been the hottest May Bank Holiday recorded in the UK. And the hottest part of the UK? Our very own RAF Northolt where 28.7c was registered yesterday. The combination of a break, heat and blue skies did strange things to the minds of many of my fellow citizens who made for the open spaces in unfeasibly huge numbers.

In beautiful Ruislip the impact was at its greatest in the streets around the Lido. My curiosity piqued by many comments on Facebook groups, I cycled up to see for myself. The traffic on the main road from Ruislip High Street was at a standstill long before the turnoff into the little road that is the only  direct car access to the Lido. A warning sign informed motorists that the Lido was full but very few appeared to take any notice.
At the entrance to the Lido, with a backdrop of cars attempting (utterly in vain) to enter a full car park then trying to turn round again, a steady stream of holidaymakers were tramping in to join those already encamped on the little beach. From the entrance it seemed pretty busy:


but up close it was staggering:
Some of those in this throng had parked recklessly on the main road and were getting parking tickets; others had commandeered any strip of unused pavement they could find nearby.

I can understand why parents would wish to take their kids out to enjoy the fine weather. It's a shame that there are far too many of them for the geography to accommodate. And I must admit a bit of smug self-righteousness as I pedalled home past the stationary vehicles. Ironically there was plenty of parking not far away, on roads near to the woods that surround the Lido, but this is the sort of thing us locals keep quiet about.
Posted by AnthonyG at 10:58 am No comments: 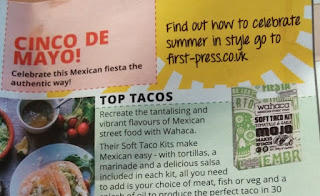 This colourful ad was featured in my weekend paper. I have not the slightest interest in tacos but was intrigued, not to say bemused, by their suggestion that I should "celebrate this Mexican fiesta the authentic way". Yes, if I happened to be Mexican, then no doubt I would indeed wish to celebrate the 5th May by firing some pistols into the air, donning a huge sombrero and slumping down against the wall of the nearest cantina [These old clichés never die, do they? Ed]. As I am not, I couldn't actually care less what the authentic way is and see no reason to celebrate this day either authentically or in true Ruislip style by slumping in front of the television with some beer.

However, that is not the most interesting question we can ask. Surely, if us Brits are supposed to celebrate Mexican festivals then why not the other way round? Are there not adverts suggesting that they Celebre el festival británico de vacaciones bancarias de la manera auténtica?  And so we move straight on to the Avenida de Toros Enormos in Mexico City for the following little vignette as Juan knocks on the door of Pepito's shanty (and Graeme Garden and Barry Cryer wince from afar),

Juan: Pepito!
Pepito: Juan! You'll have had your te - quila
Juan: Well, no old friend but that can wait. Haven't you heard? It's the May Bank Holiday back in England. We should be celebrating it in the authentic way, according to an advert I saw posted up over by Mrs Naughtie's Refried Bean Bar.
Pepito: And what might the authentic way be?
Juan: We drive off for hours to the beach, enjoying the many scenic traffic jams on the way, park miles away from it, stagger along in the broiling sun, pay too much for some ice creams, wonder where the sea has gone and why everything stinks of seaweed, drive home with sunburn, light a barbecue in order to turn some cheap and nasty burgers into cheap and nasty lumps of charcoal and then listen to Juan Virgo saying "Where's the cue ball going?" for the umpteenth time in the snooker final.
Pepito: And then we have a nice cup of tea?
Juan: Si.
Pepito: Fantastico. Vamos!

Posted by AnthonyG at 9:17 pm No comments:

Reach out, I'll Be There

The sheer misery and frustration caused to many of its customers by TSB's total screw-up of an IT upgrade has been filling the news for the past two weeks. A shotgun marriage with Lloyds back in the days of the great financial panic of '08, then a hasty divorce and reckless project management by new Spanish owners resulted in systems that failed.

For those of us lucky enough not be banking with this wretched outfit, there is the perennial fascination of picking over the lies, misstatements, corporate PR flannel and horrific jargon that inevitably emanate from businesses in such predicaments.  I could not resist picking up on this little morsel courtesy of the BBC. A couple, Mr & Mrs Jones, making a long arranged house move found their account frozen and were nearly stranded, having moved out from their old house and unable to move in to the new one.  As Mrs Jones makes clear, the bank staff were as powerless as she was:

The TSB staff were being as helpful as possible, but they were hampered by the terrible IT mess. It was a ridiculous situation to be in. We were in limbo," she said.


The money came through eventually. It was the bank's attempt to smooth it all over that deserves our contumely. This is what a "spokesperson" had to spoke say

"We're really sorry for the experience Mr and Mrs Jones have had whilst moving home and the inconvenience this has caused them.
"This isn't the level of service that we pride ourselves on providing, and isn't what our customers have come to expect from TSB. We have reached out to Mr and Mrs Jones, and we will ensure that they are not left out of pocket."

It is fairly clear from the most cursory reading of the news recently that this is exactly the sort of service TSB customers have come to expect, but the bit that really intrigues is the phrase that only a faceless PR person could utter and not sink through the floor in embarrassment - "Reached out to". What does this suggest to you? A mother opening her arms to scoop up a wailing infant? A celebrity embracing victims of some ghastly disease? Or perhaps, in the words used to title this piece, the sentiments of a popular beat combo conveying a degree of affection to a young lady? Do any of these sit comfortably with the idea of a banker who waits for a serious complaint to be filed before issuing a press release? What is wrong with saying "we have apologised?", or perhaps just "we talked to". What on earth does "reach" mean in this context? They didn't act proactively. They created a problem then tried to make it look as they were doing something praiseworthy as their big corporate arms extended to offer comfort to those in distress.

If there's any reaching going on, it's going to be many TSB customers reaching for application forms to transfer their accounts.
Posted by AnthonyG at 11:48 am No comments:

Spring - and about time, too.

This time last year I was worrying about the effect that the dry winter and spring might have on our garden and indeed on the availability of water during the summer. So much for history. There was no noticeable problem. This year it has been the opposite. Lashings of rain for months and a very shaky start to the spring. A false start a few weeks ago when it seemed to be warming up was followed by more chill, exacerbated by a brisk wind.

There was a nice interlude last week when we took my American cousin to Bath for a couple of night's stay and managed to pick two of the most relatively sunny days in recent weeks; the moment we returned to London it became unpleasant to be outdoors again.

Today it seems we may at last be able to think that winter is over. It is pleasant today and set to become fairly warm next week. Vegetation is taking off in all directions. I might even stop wearing my thick winter coat when I venture outside.
Posted by AnthonyG at 12:16 pm No comments: