Those awful advertising slogans - no. 14 - McDonald's

I've avoiding mentioning the burger'n'fries giant before in these hallowed columns because its slogan - I'm Lovin' It - was self-evidently ludicrous given that the "I" in the lyrics was clearly a reference to their Head of Marketing. Today I noticed a new strapline to an ad in my daily paper. The subject matter was the calorific content of a McDonald's meal (and oddly, if you go to their website and look at the FAQs on the subject you will be told to go and study the menus in one of their "restaurants").  The pithy reason I should chow down on a burger and zero calorie coke is, apparently:

Because There's Only One You

Naturally we begin our examination of this proposition by considering an alternative meaning. What if there were two of me? Would it be fine if one clone binged out on fast food whilst the other cooked sensible meals at home? By the same token, would society condemn if one clone smoked and drank itself to death watching its other self pounding round the gym circuits? I have absolutely no idea. Science Fiction writers have explored the concept of multiple selfs for many years and it is an ethical nightmare, especially if there is a legacy at stake and Grandma's will, written in simpler times, merely says that the antique silver goes to her beloved granddaughter Cynthia - when there are fourteen of them jostling to get into the solicitor's office.

Perhaps we can return to this fascinating theme on another day. I am still struggling to see how my oneness has anything at all to do with my choice of cuisine. If I am of a mind to eat out and it suits me to call in at McDonald's then I will do so. I don't stand there on the High Street and think "Well, if there were more of me we could all go down the Chinese and have the big corner table and order one of those banquets for twenty, but there's only lil' ol' me here so a Big Mac it is." And I am hesitant to assume that anyone else does.

What do I do with the information that I am a single integer with a value > 0 and < 2? This could apply to any commercial transaction, from buying a ride in Mr Musk's space rocket to a banana in Waitrose1 . Telling me something I know and have pretty well always known is identical to telling me nothing.

What then does the slogan mean? At face value, nothing at all. It could just as easily have been
and, given sufficient time, incentive and a strong coffee, I could go on. Incidentally, if the aforeseaid HoM has got this far and you like any of these soundbites, let's do lunch, yah? Only not at your place, if you don't mind, there is only one of me and I'd like to preserve what I've got just a little longer.

1.  Thanks to Andy Webb for doing the research on the cheapest  single thing one can buy in a supermarket.

I did not think I would need to return to this topic again. Surely (I thought), they will have taken note of my coruscating comments about their grasp of geography and my various travels and the despairing, almost bitter, remarks when they assumed that all of these trips were by air. But no. For this is what greeted me in my email inbox this morning. 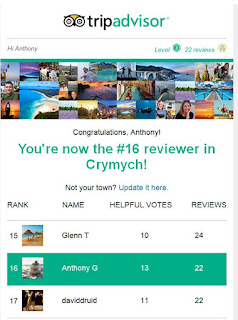 This email was despatched late last night, on April 1st. So is it a rather strange attempt by this giant of the Internet to have a little jape at my expense? Perhaps. But surely a joke that only one person (i.e. me) will see, and to which the jokester [Person who creates a joke, right? Ed] will never see the reaction, is ineffectual and trivial? They must have more imagination than this down at TA Towers.

What on earth, you may be wondering, is Crymych? Reader, I looked it up. It is a small village in Pembrokeshire. It boasts no less than some 400 inhabitants. It is hard to think that many of these are contributors to TripAdvisor and this makes my lowly ranking - 16th, I ask you! - even harder to comprehend. If they had said that I was #1 in Crymych I would have swelled with pride. I would be even now sharpening my pencil, loosening my belt and checking my wallet before heading out to add yet another apposite, sharp, yet well-informed and unbelievably helpful review to my extensive portfolio. But to rest at a miserable 16th, only just ahead of my good (and undoubtedly local) friend daviddruid - this is humiliation heaped upon contempt.

There is a link on the picture above that says "Not your town - update it here". So I clicked on it and it took me to a generic page of profile settings and I could see nothing that indicated my town of origin. It seems I may be stuck with Crymych and I hope the good folk of this lovely part of Wales do not mind sharing their set of reviewers with an interloper. I have a ghastly feeling that, were I to visit the local pub, the lively conversation would fall silent, the piano player would stop playing and the barman would ease a little closer to the stout wooden club kept under the counter. A voice in the background would say "They come here, they take over our precious reviewing slots, there's none left for local folk, we can't afford to eat at the sort of fancy places they go to, they're driving all the young people away to where they can do a bit of decent reviewing and look you, once they go they stay and there's none left here but the old and the lame, the valleys are dying for want of young reviewers and it's all this bastard's fault". And I shall smile and edge to the door and race back to my car and drive east at top speed, never stopping until the waters of the Severn are behind me.

Sorry, Crymych, it's really nothing to do with me. My heart lies in beautiful Ruislip and whilst I am conscious of the honour done to me by becoming a sort of honorary Son of Owen Glendower, it's just a ghastly mistake. If I ever do get a chance of reviewing the Wenallt Tea Rooms (#2 out of 2 Cafes in Crymych) or indeed the highly esteemed Crymych Kebab House (#1 out of 2 restaurants in Crymych) then I'll do my best. For I would hate to miss the chance of moving up in the rankings -  daviddruid  there's no way you're going to overtake me, OK bach?
Posted by AnthonyG at 10:45 am No comments: