The pleasures of technology

Got a new phone at the weekend. It has internet access, GPS, maps and so on. Those of you used to smartphones may yawn at this point. But it's my first [and he is rather excited: Ed] and this morning I trialled it on the Underground. And what a day to choose. Arriving at my home station of Ruislip Manor there was the usual System Status display on the screen and I noticed that the Metropolitan was partially suspended. Which bit? Ah, this is where we rely on an older-fashioned technology. Or at least, we ought to be able to. But the handwritten message board by the entrance was blank. And the station attendant standing at the barrier vouchsafed not a word. So, dismayed and clueless, I ascended to the platform to join a large throng of patently fed-up commuters.

No announcements were made. Never mind, I switched on my new phone, found the tube site and learned that a signal failure at Moorgate was the culprit. But were trains running normally to Baker Street? Alas, LU in their wisdom have disabled the vital Departure Boards screen on the mobile version of their website so I had no idea when the next London-bound train might arrive. A Piccadilly drew in and I took it, arriving at work 15 minutes later than planned.

This evening I searched the Android market and found a wonderful - and free - app that displays the departure board information. Nothing fancy, just instantly provides the information that you really need when confronted by messages about delays - the times of the next trains due in. If ever the internet needed to be justified, this is exactly the sort of app that does it.
Posted by AnthonyG at 9:08 pm No comments:

Sadly tonight, as I checked out the District Dave forum, I discovered that Dave had died today and many of the forum regulars were posting tributes.

I have mentioned this site more than once. It is a goldmine of information about the Tube, many of the contributors being drivers, station assistants, signalmen, line controllers and the like. The site will go on, of course, but without its presiding spirit. What a great contribution to the Web he made.
Posted by AnthonyG at 11:12 pm No comments: 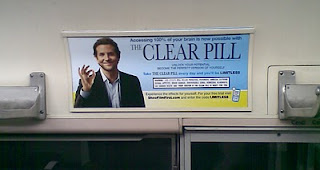 This ad caught my eye whilst travelling home tonight on the Metropolitan, a journey made slightly more fraught than usual thanks to a suspect package alert that closed the Bakerloo exactly at the time that I was seeking to travel on it. As it turned out, the journey was no problem, but what on earth is the ad about? What is the Clear Pill? At first sight a ludicrous and biological impossible claim - Accessing 100% of your Brain indeed. So I took a quick photo with my trusty but ageing Nokia phone (which is why the pic is a bit blurred when you blow it up big enough to read it) and had a closer look when I got home.

The disclaimers in the middle white panel makes interesting reading. The side effects may include paralysis, psychosis, amnesia, extreme sexual appetite, brain damage, irreversible coma, homicidal blackouts (well we all get those) and sudden death. Hmmm - a high price to pay for brain access. But disarmingly honest. It must be true, surely. I'd certainly like to be limitless. I think I might try a couple and see how far I can get before the homicidal blackouts cause me to do unspeakable things to anyone carrying a suspect package.
Posted by AnthonyG at 10:18 pm No comments: