The last commute of the year

I've worked my last day in 2010. The morning journey was fine, once more in a new "S" stock train that this time came in promptly and was not too full. The Bakerloo was good, as it normally is, and my door to door time to Waterloo was under 55 minutes. Hard to do it in less.

So of course I assumed it would be a total Bovril this evening and when I looked at the TFL website around 4pm and saw that the Uxbridge branch was suspended entirely (person "ill" on a train at Ickenham) it seemed only right and proper. But miracles can happen. Around 5pm the trains began running again. I left for home soon after when the service appeared back to normal. Or was it? At Waterloo they also have an display of the website near the escalators and it showed "Partial suspension" for the Met. Odd - had the invalid had a sudden relapse? I reached the Bakerloo platform and they began to make a service announcement but naturally my train arrived at that moment and drowned out the loudspeaker. So it was not until I reached Baker Street that I discovered it was the Amersham end that was now Ovaltined good and proper. An Amersham train drew in but they said it was terminating at Rickmansworth. No sweat for yours truly, I took it to Harrow, hoping to overtake a slow Uxbridge, failed so to do, but caught the one that I knew was a few minutes behind us instead.

At Harrow they helpfully told the Amersham crowd to take the first train as far as they could and then make alternative arrangements. Not quite like the Heathrow staff telling would-be flyers that not only were their flights cancelled but those flights that were going out later this week were fully booked (which they have indeed been doing since the blizzard whitewashed the airport last Saturday), but it had a similar sort of ring. You can't make alternative arrangements to get to Amersham and area, unless by some form of divine intervention you find a taxi waiting for you at Ricky. We are talking countryside here, towns separated from one another by miles of open fields. Hitching a ride on a passing cow might be the only way.

The problem had cleared up by 8pm - the most sensible thing for the stranded passengers to do was to go to a friendly pub for a bit.

It's not been the Met's best year. It has been increasingly prone to signal failures and defective trains.  I shall say goodbye to 2010 without regret.
Posted by AnthonyG at 8:11 pm No comments:

More on the "S" stock

For the first time I travelled from Ruislip Manor to Baker Street in one of the new "S" stock trains. It arrived after a thirteen minute gap (par for the course at the moment) so was full at Eastcote, and because of the reduced number of seats, there were lots more people standing than in the old trains. We hung around at West Harrow while the station supervisor was sought, according to the driver, to lend him assistance (I have no idea with what). We approached Harrow gingerly and Wembley Park at the pace of a snail on cough medicine (may cause drowsiness). So it was a lengthy sort of journey and I didn't find the seating that comfortable. These trains are great for short journeys, no doubt of it, but I very much hope they keep the "A" stock in service just a few years yet. Then I will retire from regular commuting into London and they can do what they want with the rolling stock.

Nice homeward journey though. Took a fast Watford from Baker Street and we flew up the line to Harrow, overtaking an Uxbridge on the slow line on which I completed my journey. Riding the Met at speed, especially hurtling past the Jubblies as they stop at all those tedious stations south of Wembley Park, is still one of the great experiences on the Tube. One can imagine oneself in a luxury Pullman racing up to Scotland or on the Golden Arrow to Dover, thence to ferry to Calais and a continental sojourn. You need a pretty good imagination though.  Especially when you arrive at Harrow and it is snowing again.
Posted by AnthonyG at 10:47 pm No comments:

I had vaguely hoped things might be ok this morning on the Met, given that they had the weekend to sort out problems created by the blizzard on Saturday lunchtime. Naturally I was wrong. After a ten minute wait a train arrived at Ruislip Manor, moved somewhat slower than normal to Wembley Park and then creaked to a halt near Neasden. We were told there was a signal problem, then we bumped through the signal and the driver decided the train was defective and we all had to get out at Neasden and cram onto the Jubbly. 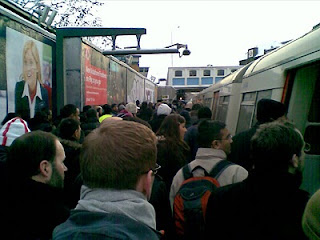 And here we all are, more than 700 people trying to reach the bridge that you can just see in the distance so we can cross the line to the Jubbly platform. This took more than ten minutes in itself.

I suppose we are fortunate to have the Jubbly as a back-up but, given that this was the third journey in less than a week where I have had 30 minutes added to my travelling time,  I wasn't feeling that charitable. Nor were one or two of my fellow passengers, who engaged the driver in a heated debate. You can see the people looking into the carriage on the right where the colloquy was in full swing. Oh, and what you can't see is that the platform is covered in snow and ice, just to add to our enjoyment.
Posted by AnthonyG at 2:18 pm No comments:

Well, not a blizzard by Canadian standards but pretty impressive compared to what we are used to. I took a couple of photos at around 12:10pm this morning when there was a light dusting. Two hours later there was 6 -8 inches, the roads were almost at a standstill, Heathrow and Gatwick were shut and just venturing round my local streets to take a few more pictures meant putting on my boots. On the BBC and Sky news channels the weather was the only story.


You can see the photos in the new link on the right. These are stored on Picasa web albums, the first time I have used this particular medium and I am not sure if I have got it all right yet.
Posted by AnthonyG at 6:21 pm No comments:

No apparent problems this evening at Baker Street when at 7:00pm I boarded a northbound train. We moved off, slowed down and stopped, barely out of the station. We waited a minute, crawled forward very slowly for a few minutes then stopped. Repeated a further 10 times, all the way up to Harrow, this resulted in a delay of about half an hour to my journey home.

Cause - signal failure at Willesden Green. But this very excuse was used a couple of nights ago when there was another slow run, albeit not as bum-achingly slow as tonight's barrel of laughs.  And why did we continue to grind along having passed through the said problem area? And why, when I changed at Harrow for an Uxbridge, knowing there was one right behind, did it take a further five minutes to arrive? And did the out-of-service train that went into the siding at Harrow and was then run back down to the fast track to Wembley Park have anything to do with it?

I think we should be told.
Posted by AnthonyG at 10:25 pm No comments:

"That work of fiction known as the timetable".

Not my words. Those of the driver of our London-bound Metropolitan train this morning (I won't identify him any further). He was unhappy that the destination of the train according to his roster seemed to differ from the information available to him as we reached Harrow.

I'm sorry, I really can't help myself, and as it is nearly Xmas, I am going to indulge.


The Timetable.
[insert lush swirling romantic strings and a gravelly voice-over]
"Theirs was a passion that knew no bounds. They dared to be different. They defied convention and changed platforms to be on the trains that they loved. Read the book that every line controller is talking about. Gasp at the early morning departures from the depot. Marvel at the gaps in the Sunday services. Be shaken to your very core as you ponder the 8:38 from Amersham to Aldgate, not stopping at Preston Road. Yes, The Timetable, available from all good station buffets and also from that bloke who gives away free copies of the Evening Standard." [very fast and breathless voice over] "no resemblance is intended to any actual train movements. Your fares may go up (but never down) and your season ticket is at risk if you lose it".

The gap in the (good) service

I hoped to be in to work a little early today. But the train I aimed to catch at 8:24 did not appear. Nor did the one at 8:30 or the one at 8:36. Then they announced that a "good service was operating". Fed up with waiting on a cold platform, and unhappy about being lied to, I took the trouble to press the green information button on the Help point podule (or whatever they call it) and ask what they meant. The man in the nice warm booking office replied that that was what he was being told by the information system. I suggested that maybe his information was incorrect. Reluctantly he agreed.

So my friends. It doesn't matter what ghastly errors you may make, or however unpleasant the situation you think you are in. Just remember the magic mantra "It's all right now" and nothing can ever be held against you. You are blameless and free from sin. I wonder if this would work on a policeman - "Yes officer, I did nick the handbag then but I am not actually nicking it right now." Maybe not.
Posted by AnthonyG at 9:17 pm No comments:

The big freeze goes on

The cold snap is going on and on, and it is now the coldest weather at this time of the year for 17 years, or 50 years, or maybe since just after the little Ice Age in the 17th century. The glaciers are not returning yet but one can easily imagine that a few miles north of Watford the cliffs of ice are once more astride the land. Certainly that could easily be the case given the failure of the national transport system which, surprise surprise, has massive cancellations,

Actually the Tube has performed reasonably well, though fewer signal failures would be helpful, bringing as they did problems to at least 5 lines this morning and giving me an uncomfortable 15 minutes in the cold waiting for a Met.

Today we have snow in central London, just a dusting, but enough to whiten the rooftops and lay down some wet slush on the half-cleared pavements. This is a sharp contrast to the rest of the country where the snow is many inches deep. There is also a dispiriting layer of grey cloud, reducing the view to dullness. [it's a bit miserable. The public don't want to read this sort of thing: Ed]
Posted by AnthonyG at 12:57 pm No comments: