The sounds of spring

Commuters on the London Underground are used to the noise of the system, from the rumble and squeal of the trains to the barrage of announcements. How pleasant then to be able to record a different kind of sound, the tweeting and chirruping of the birds in the trees around Ruislip Manor station as they went about their business this morning. The sparrow has all but vanished from many gardens but I think I saw a few today, together with the regular pigeons, magpies, blackbirds and one or two others I cannot identify. The singing was at a high volume, perhaps indicating that the annual competition for nest-space and mates is well under way.

Many trees were cut down when the station was rebuilt a couple of years ago, and others were heavily pruned, forcing both birds and squirrels who had frequented the station borders to move elsewhere. At least some of the birds are back - the squirrels have not yet reappeared.
Posted by AnthonyG at 5:39 pm No comments:

A hole in the garden 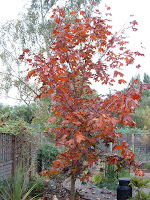 This is a picture of the Acer that used to adorn our back garden. At this time of the year the leaves would be forming as shiny buds at the tips of the branches, ready to burst open all at once on the first warm day. Alas, the tree is no more. We had to take it down to satisfy the requirements of our insurance company, following a subsidence claim.

We have yet to place something to fill the hole - it gives me something to think about during the daily commute
Posted by AnthonyG at 11:09 am No comments:

Well what do you know. I've had a rough couple of commuting days and moaned about it in public. Today all was sweetness and (quite apt, given the time of year) light. This morning I had to speed up a trifle to get straight on a London bound Metropolitan (probably several minutes late but I should care?). The Bakerloo was on its usual good form. Arrived at work early. Coming home, straight on a Bakerloo at Waterloo and at Baker Street the raw pleasure of finding that the next three departures were for Uxbridge. I let the first one go as it was crowded and settled comfortably into the second no more than two minutes later.

I also had the esoteric, one might almost say eldritch (and I don't find many opportunities to employ that particular word) experience of listening to an audiobook, Edgar Allan Poe's grisly Narrative of Arthur Gordon Pym of Nantucket. I love that wholly unnecessary suffix. Did Mr. Poe fear that his readers might confuse his obsessive tale of dirty doings on a whaling ship in 1827 with the Narrative of Arthur Gordon Pym of Ruislip*, an obsessive tale of dirtier doings in the rear carriage of a stalled Piccadilly train at West Ruislip Sidings in 2007? Probably not.

*I suppose I had better make it abundantly clear that I am not the author of this tale, nor have any plans so to be. Further, to the best of my knowledge and belief, it does not exist, and has never existed, and for the sanity of the world, it never will.
Posted by AnthonyG at 9:23 pm No comments:

Yesterday there were loads of signal failures on the Underground. Today there were none (at least not on the lines that I use). But I was still 20 minutes late in to work. Apparently engineering works at Finchley Road, scene of yesterday's unpleasantness, overran this morning so there were extended delays on the Metropolitan. Rather than hang about on the platform at Ruislip Manor, waiting for a train that the announcer* thought might be "11 minutes away" (after waiting 7 minutes for my usual train if you please) I took a Piccadilly which, as usual, creaked arthritically down the line to Acton Town with plentiful stops between the stations. Our driver informed us this was because another train was ahead. Excuse me? More than one train on the line? Heavens, what ever next? There was me thinking that the Underground was meant to be a commuter network.

* Having a live announcer made a change. But I'm not sure he really exists. We have these big white pod-like things on the platform with buttons to press for Emergency and Information. I pressed the Information one. I got back a recording saying there was nobody available and I should ask the platform staff. Yeah right. Like we have ever had staff actually on the platforms.
Posted by AnthonyG at 11:25 am No comments:

It’s been fairly quiet on the commuting front in recent weeks but today London Underground roared back in style. I was expecting trouble because there had been high winds and heavy rain overnight (with more to come tonight, oh joy) but naturally none of today’s little awkwardnesses were caused by the weather. Step forward our old friend “Signal failures” and let us read this morning’s roll of honour.

I arrived at my home station Ruislip Manor to find no Piccadilly trains due to signal failure at South Harrow. OK, no problem, I don’t travel on this line anymore. With a large number of wet and uncomfortable fellow travellers I took shelter from the driving rain waiting for the 8:32 Metropolitan. This of course did not appear but the next one arrived around 8:40. We made it to West Harrow and stopped outside Harrow-on-the-Hill for about ten minutes. This, I learned later was due to a signal failure there (our driver maintaining radio silence during this period).

At Harrow we found a crowded platform and an empty train on the adjacent (“fast”) platform. They announced that there was now a major signal failure at Finchley Road and the Met was running only as far as Wembley Park. The empty train reversed back towards Uxbridge (an extremely rare event) and we trundled down the line to Wembley Park with the hope of catching a Jubilee line. En route our driver, now a lot chattier than before, told us the problem was “partially fixed” (what on earth does that mean? - either the trains can run safely or they can’t) and he thought we might run on to Baker Street. Then he told us the problem had “recurred” and we were to terminate at Wembley Park after all. On arrival, my train emptied and another pulled in to the fast platform and also emptied. I had to let two Jubilee trains go before I could even get near to the platform edge. But in the end the waiting paid off with a seat on the third arrival.

As I arrived at my destination, Waterloo, I was delighted to find that the travelator between the Jubilee platform and the South Bank station exit was out of action, and thrilled to hear that the Bakerloo, my normal line into Waterloo, had severe delays. I don’t think I need to tell you what the stated cause for those delays was.

So a magnificent effort by LU to screw up this morning's journeys for travellers from NW London and barely a hint of apology from anyone, apart from the driver on the Met who did say sorry for all the “confusion” this morning. Nice idea, wrong word. Incompetence, mate, that is the hub, nub and crux of the problem.
Posted by AnthonyG at 1:07 pm No comments: