The news story itself is grim and sad - victims of online crime, who foolishly allowed themselves to be videoed whilst doing things normally only done in private, blackmailed and some driven to suicide.

But surely the Guardian might have assigned the story to someone other than its reporter Alexandra Topping?
Posted by AnthonyG at 9:37 am No comments:

We may live in a digital age but the easiest way to quickly encapsulate a lot of information is still the good old-fashioned notebook. This morning, thanks to a quick-witted cameraman, we can all get a glimpse of how a government aide views the crucial negotiations for Britain's departure from the EU, as she helpfully brought her opened notebook into a Downing Street meeting. Like other commentators, I have fastened on to the most important point, which I show below helpfully highlit.

The key words read: What's the model? Have cake and eat it.

So it is written and thus it must surely be. Forget goverment by parliament (now that referenda rule). Forget the rule of law (enemies of the people, according to a well known daily paper I refuse to name). Cake is the name of the game and, once we've thrown off the shackles of EU faceless bureaucrat enslavement, we will not only have cake but can eat it as well and jolly well STILL HAVE IT.

Cake is good. The Great British Bake-Off is the most popular show on telly for a reason. So I am enormously reassured that our leaders have latched on to this essential fact with what must be called the Marie Antoinette policy. Pound sinking? Finance sector upping sticks for Frankfurt and Dublin? Industrial investors all round the world thinking "Shall we bother to spend any more in the UK? Nah". None of this matters a jot. We are going to have cake. Victoria Sponges. Lemon Drizzle. Coffee and Walnut. Chocolate cake. I hesitate to mention fruit cakes for obvious reasons. Whether the nation will divide, bitterly, over the burning issue of whether Jaffa Cakes are indeed of the cake family or merely jumped-up biscuits is, I hope, to be left to another time.

I trust that Theresa May is writing her resignation speech and has primed the Queen for another change at the top of Government. When Mary Berry drives round to the Palace to kiss hands, we will surely be on the road to that shining city on a hill where the shops are open all day, there is plenty of room in the car parks, there is as much cake as anyone can want and you can eat all you like and still have it. You may say I'm a dreamer. But I'm not the only one. [Yes you are: Ed]
Posted by AnthonyG at 1:52 pm No comments:

Three for the price of one

My eye was caught by an ad for a theatrical presentation at the Donmar Warehouse in Kings Cross and I present it to you thus: 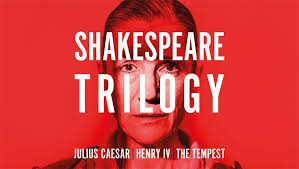 Now there are well known trilogies like the Lord of the Rings or The Godfather, and there are series like Star Wars, in which the sequence of pieces develops its themes, stories and characters in a harmonious and pleasing way. Shakespeare himself has his natural trilogies (Henry IV parts 1 and 2 and Henry V, and the Henry VI series). One does not really expect three utterly different plays to be lumped together as a trilogy unless they have something that links them (other than that they are being performed at the same place by the same company). And so, it being a Saturday and there are few minutes to spare before we join the shoppers down at our local Sainsbury's (and having missed, without regret, "Black Friday"), I give you some sense of what this trio of plays should be like.

Scene: A storm near the Forum, just outside a low tavern
Enter Brutus

Brutus: This unnatural storm has soaked my toga. Hello, is that a tavern? Two pints here, Sir John, and see what Caliban would like. Has the Earl of Worcester left any messages for me only we're supposed to be working over the king this afternoon and then I've got a date lined up with Miranda up on Gad's Hill on the Ides.

I think something like that might pack them in but perhaps it needs just a little more work.

I received a couple of emails today sent by spammers (which were quarantined by my ISP). Unusually, they were headed "spam mailout". It's the electronic equivalent of the postman putting your junk mail straight into your dustbin. Makes you wonder why they bother though.
Posted by AnthonyG at 2:10 pm No comments:

From our own correspondent in Karakorum

The surprise election of Genghis Khan as leader of the mighty Mongolian republic continues to reverberate amongst the capitals of the world. Mr. Khan's policy positions on many key issues are not entirely clear but a speech he made a few days ago contains some clues. Speaking about the Great Wall of China, which has for many centuries barred his people from moving south, Mr. Khan said "We're gonna knock it down so we can ride where we want and burn anything we want and steal the rest and what's more, the Chinese can pay for it. Then we'll have to build it again to keep those yellow slitty-eyed pigtailed murderers from coming into our country, and you know what, they can pay for that again.". The Chinese ambassador smiled inscrutably when asked about these comments.

Asked about his foreign policy, Mr. Khan said simply "Anyone we don't like, we kill em, right? My Horde won't stand for any liberal nonsense about human rights. Cut off their heads, pile 'em up and raze their cities to the ground. Only way to teach them to respect us. Yah hear me Samarkand, Bukhara,  Baghdad? We're coming for you".

When asked about the impact on the environment of his measures, Mr. Khan uttered some words in his native patois that were hard to follow. One of his aides later translated them as "Screw you and the horse you rode in on, which you will shortly be carrying back home on your back because we'll have cut off its legs" or something similar.

The comments of certain local witch-doctors that the new policy of killing everyone for hundreds of miles around might mitigate against the creation of new jobs and a prosperous harvest were dismissed by Mr. Khan. "We've have enough of these so-called shamans and folk healers. It's time for the real people to have their say and what they're saying to me, loud and clear, is that killing everyone is good, it's why God gave us two arms to wield swords with, and hell, it's damn good fun and we Mongolian Hordes, we just wanna have fun and no peace-loving civilisation is gonna mess with that".

Finally Mr. Khan claimed he was only the humble instrument of God, announced he was divorcing the latest of his two hundred and thirty wives and marrying anyone he goddam felt like, and signalled the start of the building of a stately pleasure dome to be called Xanadu Towers. This was greeted by spontaneous applause from the massed ranks of the Horde (anyone not spontaneously cheering was observed soon not to be able to, as it's hard to cheer with your tongue cut out).

Mr. Khan is expected to spend a few days in Karakorum, mainly slaughtering people, before leading his armies on a grand tour of western Asia and Europe where slaughtering people is likely to be the main activity although the razing of cities, tearing up of trade routes and burning of books are known to be cherished policies.

Supporters of Mr. Khan's opponents in the presidential campaign were unavailable for comment as, according to well-placed sources, they had all been slaughtered.

The Victory of the Liars

I suppose I ought to record, for the benefit of posterity, that everyone I know is still reeling from the shock election of D. Trump as President of the USA. Like everyone else, I treated his candidature as a joke and assumed he would either fall quickly by the wayside or spectacularly self-destruct. He did neither; instead be blustered. lied, bullied, lied and lied again and managed to fool enough voters to win the electoral college (if not the popular vote).

The parallels with the Brexit campaign are clear. The appeal to voters to assume that everyone in power is corrupt or effete and that turning the clock back to some imagined time of past greatness will make us all rich and happy, never mind that this is not something you can actually do. The demonisation of foreigners. The sneering dismissal of expertise (although I think we can safely assume that, should the President-elect fall ill, he will call for the best doctor in town, not for the most obscure). The belief that only a few simple laws can change everything and at once jobs will be created, houses and hospitals built, social cohesion obtained. The belief in belief itself, that anyone who dares question it is an enemy to be ignored or shouted down, not engaged with for none must challenge the sacred mantras.

Possibly the stupidest thing that Britain could have done, at a time when the USA seems poised to revert to the isolationist and protectionist policies of the 1930s, is to dump our main trading partners in the hope of finding something better. And that is what we did. Now we see our PM trying to woo India. And what is the first item on their agenda? Easier access for students and businesspeople to visit the UK. Oogh, those awful foreigners. What a nerve.

It will be interesting to see if Scotland manage to beat England in the World Cup qualifier tomorrow night. This could be another symbolic moment of national decline following (in the case of S. Allardyce of blessed memory) another moment of stupidity.
Posted by AnthonyG at 6:52 pm No comments: