Once more the chugging of pistons ...

Six years ago the Metropolitan Railway celebrated 150 years of operations. Steam trains hauling vintage carriages delighted our eyes. This past weekend it was the turn of younger sibling District to reach that venerable age and as usual we had the pleasure of watching the old trains once again. 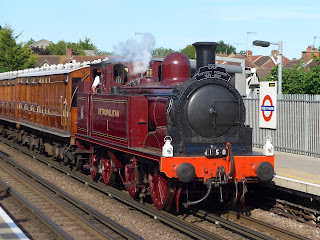 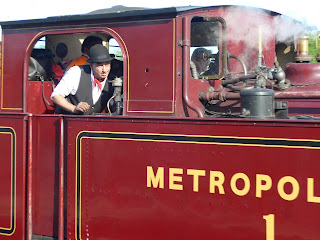 Metropolitan number 1 was fortuitously saved from the wreckers yards when London Underground (shame on them) were trying to get rid of it some 50 years ago. It was built at the turn of the 19th century to haul the express services from Baker Street to Aylesbury, and beyond to Verney Junction. It led a preserved train of "Chesham" set carriages dating from 1890 and had the electric locomotive Sarah Siddons at the back in case a bit of extra puff was needed.

I loved the driver's enjoyment of his role - he waved nicely to us as he passed - and his bowler hat, waistcoat and red scarf.

The introduction of new signalling systems on the Underground means that there may be no more such runs (unless maybe they stick a modern S stock carriage at the front, which would totally ruin the effect). Indeed, this particular journey only went from Ealing to High Street Ken before turning round, so not a lot of real smoke would have got into the tunnels.

Quaint though the train may be to our eyes, a hundred years ago people really did commute into central London from way out in the countryside in just such a way.

The Met is running below par at the moment, whilst they rebuild platforms at Baker Street in readiness for the new trains. Platform 1 has be...