Stone me - They've done it again

6 years ago I had the pleasure of recording that the football team I have been supporting since 1973 - Wealdstone - won their league and were promoted to the National League South (or League division 6 in old money).

This season they have been regularly playing the best football I have ever seen them play, have been top of the league since August and have the best record in terms of points per game of any team in the English game in the top 6 leagues. But the season was cruelly cut short by the covid-19 crisis and the resulting lockdown. It has been a long and at times agonising wait as the various authorities decided whether to end the season early or hope for a resumption and, once that decision was forced on them, how to end it. They might have declared it null and void, wiping out the Stones' fantastic achievements. They might have declined to make any promotions or relegations.

Tonight after much deliberation the league had a vote of its member clubs and adopted a resolution to  - well, here is the how the news was broken by Wealdstone's chairman Rory Fitzgerald 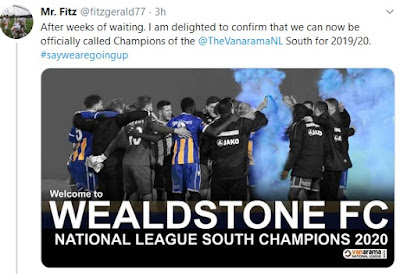 So, for the first time since 1989, the Stones will be playing just below the English Football League and will be facing teams across the country rather than just from the south. Heady days indeed.
Posted by AnthonyG at 10:18 pm