Humans have sent probes to the edges of the solar system. They have worked out how we reproduce and how atoms stick together. They have constructed inspirational works of art and literature. They have explored every part of our planet, sometimes undergoing perils and difficulties that are at the extreme of survival.


They have also invented morris dancing1. If this were confined strictly to indoors and for consenting adults only, as in the picture below, I would be fairly sanguine about it. But it is not ... 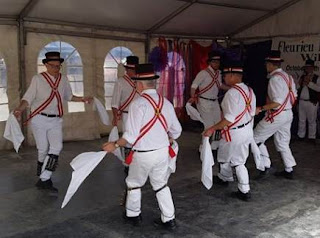 
First, do please note that get-out adverb "voluntarily". There may well be times when, chancing down a village street on a warm afternoon, eagerly anticipating the cool satisfying taste of a pint of bitter in an ivy-clad local hostelry, the fatal sound of bells being rung and bits of wood being clattered may reach my ears too late. Between me and the pub are about a dozen men, clad strangely in white with silly hats and garters.They face each in two lines. Perhaps an accordion is being warmed up. A few onlookers watch, numbed. I have come too far to turn back now. I take the few steps needed to gain the entrance but even as I do the dancers spring to life, jogging up and down and uttering pointless exclamations.

"Sorry about that sir" says the barman sympathetically as I shut the pub door, hoping to muffle some of the din outside, and stagger in, appalled. "We can't legally stop them. I mean, we've had petitions and written to our MP but, as it's on the village green, then it's sort of open to the public, you see.  Have a drink on the house, it's the least I can do".

We are agreed then, that it may be impossible on certain occasions to avoid being caught up in some sort of morris dance event. My resolute objective is never to do so if it is possible in any way to take appropriate avoiding action.

I am not disputing the authenticity of this form of group exercise. It has been recorded since the fifteenth century. Though the practice nearly died out in the late nineteenth century, sadly it was revived, has become widespread not only in Britain but around the world and now you can even, if you really must, watch it on YouTube2.

My point is I do not want to watch a bunch of men (and it usually is just men), waving handkerchiefs and bashing wooden batons together. What on earth do the spectators observing the scene below, in the US in this case, make of it?

Nor am I impressed to see them all skip forward a pace, then back, then turn, then repeat. I did country dancing at primary school and the memory still sears. As a spectator sport it fails to grip. It could be made more watchable if they adopted some of the following friendly suggestions:
I fear that none of these eminently sensible ideas are likely to be adopted and that our beautiful villages will continue to harbour gangs of legalised prancers.


Footnotes:
1. Opinions differ as to whether the "m" in morris should be capitalised. As morris is a type of dancing, rather than being named after some medieval jerk who couldn't keep his feet still, lower case is correct. Also, the authorities on this sort of thing, the English Folk Dance & Song Society spell it this way.
2. You may be expecting a link or two here. Sod that, you can look it up yourself.
Posted by AnthonyG at 11:00 pm

The Met is running below par at the moment, whilst they rebuild platforms at Baker Street in readiness for the new trains. Platform 1 has be...