Most of my little pieces on the theme of 101 Things I Refuse To Do Before I Die are about fairly straightforward aspirations - exotic places to go, unusual activities to try out - and my take on them is to explain why they do not represent anything that interests me. Quite different is the topic for this episode for we are venturing into the realm of science and the suggestion made, presumably in good faith, by the website Pick Your Goals, is to

I am certainly not pouring any contumely on the thinking behind this notion. The very idea of black holes was a mere philosophical curiosity until just a few years ago when the implications of Einstein's theory of gravity became better understood, and then observations of the behaviour of certain stars and entire galaxies confirmed the reality.

A black hole represents the triumph of gravity over all other natural forces. Created by the collapse of sufficiently large stars at the end of their lives, the matter implodes until the gravity is so strong that nothing can move away from it and anything that gets sufficiently close will be caught and added to the singularity - the impossibly dense and impossibly small object at the heart. By impossible I mean that the current understanding of physics can not say what is going on there - real stuff goes in and nobody knows what becomes of it. Included in that stuff is light.

Light moving toward a black hole will curve around it and may curve directly into it. It will not emerge. The black hole itself generates no light because there are no electrical processes possible that would generate photons. Therefore we cannot "witness" one, whether it be supermassive or rather tiny. There is effectively nothing to witness.

Ah, you may be thinking, did they not show a fantastic photo of a black hole quite recently. Yes, they observed the light curving and bending right round a black hole and produced one of the greatest scientific pictures of all time, as I noted at the time and here is that remarkable image again. 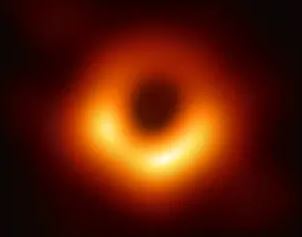 But this is the light bending round it - you see just blackness - the utter absence of light or any other radiation - in the place where the singularity lurks.

I would dearly love to say that I have witnessed a black hole but it would be nonsense, a little bit like saying you have seen someone's face from just observing their shadow. I am going to, reluctantly, have to move this idea from "to do" status to "don't bother".
Posted by AnthonyG at 10:11 pm