This may or may not be the start of a new series.

I present to you, plain and unadorned, a tweet as it appeared on my tweetline or whatever it's called today.  Before you read my comments, study the whole of it and consider what it is trying to convey. 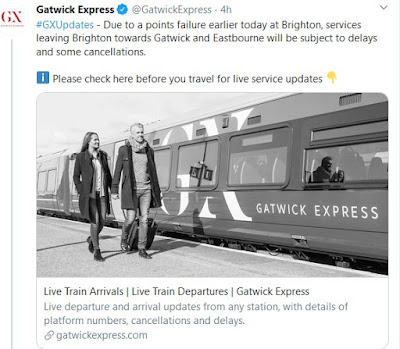 If you take the time to read it then it informs of delays to the railway service between Brighton and Gatwick (and poor old Eastbourne as well). If you simply scan it lazily, letting your normal perceptive skills take charge, then you will focus on the 60% of the whole that is composed of a picture. A picture of delays, of anxious passengers looking hopefully up at departure boards, perhaps of a harassed traveller running to an airline boarding gate that is about to close, all driving home the key message that there are problems?

Not a bit. We see, cunningly pictured in a nostalgic black and white, a couple strolling insouciantly (I think that's the mot juste) along the platform. No doubt their train has arrived on time and they have in mind a leisurely check-in, a drink in the bar, a pleasant flight and who knows what in a seedy backstreets hotel in Rotterdam afterwards? She thinks he's leaving his wife at last. He is juggling her and another girl friend in Rotherham as well as his long-suffering wife who thinks he's off to yet another boring sales conference. Little do either of them know that a sinister duelling-scarred man in a black cape is also on that platform ...

Ah, as usual, my imagination has run away with me but you see the point? A picture may be worth a thousand words but in this case those words are utterly misleading. I have forgotten all about the delays. My musings about Simon and Kath (not forgetting Deirdrie in Rotherham and Glenda in Sidcup and the mystery man1) have diverted me from the key issue, that there are delays on the Brighton line. Never mind, I don't use that line so I couldn't really care less. But if it was you, you were in danger of missing a flight and were panicking about how to reach Gatwick in time, would this artfully staged photo (comprising most of the message, let me remind you) make you feel that the Gatwick Express people:
a) cared about your journey?
b) cared only about projecting a misleading image of themselves?

Footnote:
1. Could this be the long awaited return of Count Indesit Ariston de Dietrich?
Posted by AnthonyG at 10:27 am