This ad has appeared a number of times when I have a look at Facebook (I only go there for its superb coverage of aardvark breeding farms in Delft) and I'm beginning to become a little bothered by it. 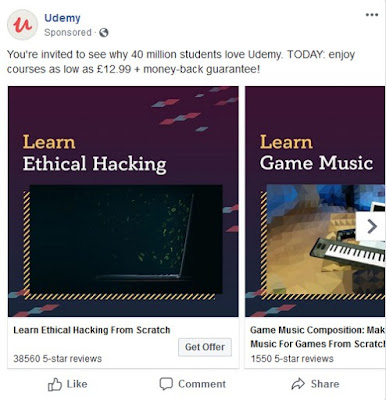 No, not the 'Learn to be a Professional Musician in Three Minutes', risible though that is. It is, of course, the unreal juxtaposition of the words "ethical" and "hacking", coupled with the proposition that, for a small outlay of cash, you too can be ethically hacking away with the best of them in no time.

Ethical does not necessarily mean virtuous, it simply refers to having a consistent set of core beliefs that govern one's actions, but I had a look at the details of the course (purely from detached scientific motives, naturally) and it clearly is being used to mean good, upright and legal.

Hacking admits of no such ambiguity. Hacking means unauthorised entry to the technical systems (almost invariable the computer systems in this context). Hacking is illegal. This is not a grey area. It is not lawful to hack.

Consequently there is no such thing as ethical hacking, any more than there is ethical burglary or commendable GBH. If you access someone else's systems without permission you have broken the law. It doesn't matter what your motives are, any more than you can say "Yeah, I chucked that half-brick through the jeweller's window but I just wanted to see if it was brick-proof. Sadly, it wasn't." 1.

Now there are one or two special exemptions to this rule. There are organisations, and individuals, who probe for weaknesses in systems so that they can bring these to the attention of the systems designers. I don't know what procedures they have to prevent abuse, but what is very clear is that if you fork out your £12.99 or whatever to learn "ethical" hacking over the internet, then there are not going to be any checks or balances on your subsequent roams into cyberspace. I looked in vain for the terms and conditions that required a criminal records check, or that you register your hacking activities with some responsible third party.

What next from these people, I wonder. Here are some possibilities that I hope never see the light of day:


Footnote:
1. Well, yes, you can say it but what I mean is, it won't stand up in court and the beak will probably give you an extra three months for being a prat.
Posted by AnthonyG at 12:50 pm