Setting My Teeth on Edge

I don't usually use Edge, the web browser supplied as part of Windows 10. Tonight, driven by some devil-may-care sense of adventure, I thought I'd have a look. No sooner had it loaded than it wanted me to update it. I had assumed I already had the latest version, given that Windows 10 has recently updated, but no matter. I clicked to update it.

I wonder what language this message is in 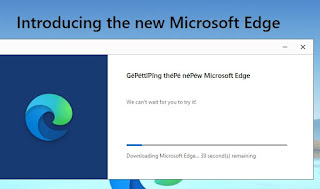 I carried on regardless (us Ruislip Commuters laugh in the face of danger, you know) and was rewarded with the next helpful missive

Soon after this the installation completed. Edge opened and asked me if I wished to import my settings from my normal browser, Firefox. I assented. It pretended to be doing something but did nothing at all. None of my bookmarks were imported.

I did a basic web search to see if others had this problem and found someone with the same issue back in January. Naturally the Microsoft professional who responded was unaware that there was a problem, looked into it, confirmed it and then said it was all a total surprise to everyone at Redmond (including those who presumably wrote and "tested" the import procedure) and why do not an export of the bookmarks out of Firefox to a html file and then import to Edge. Yes, indeed. Just as we used to do this sort of thing 20 years ago.

It's exactly the same as if I were to call up my garage
"Hi, my car is not starting, the computer is showing a couple of error messages"
"Oh yes sir, we get a lot of those. Funny things, these computers, aren't they? Now then, have you got your starter handle handy, plus two strong lads to give you a push start?"
Posted by AnthonyG at 10:41 pm