I’ll be glad to see the back of the Piccadilly line when my office moves from Hammersmith to Waterloo in a few weeks. Here’s why. Yesterday there was a “fire alert” at Holborn. It was all over by 5:09pm. At 6:30, westbound services out of Hammersmith were almost non-existent. The hapless platform announcer had to explain that the indicator boards were unreliable (regular passengers know that). I took a District line train up to Acton Town. We passed two Piccadillys stationary just outside and there was a third at the platform. Amazing – although the indicator board said Heathrow the station announcer told us it was going to Ruislip. So I hastened aboard. From the demeanour of the passengers it had been there for some time. We waited. The driver told us he did not know but probably the train would turn round at Rayners Lane. The announcer apologised for the delay. We waited (remember there were two trains stuck behind us on the track). After about ten minutes we left. By now the train was crowded. On arrival at Rayners Lane, no sooner had our train moved into the siding, in order to turn round, than another arrived, almost empty.

So what was going on here? The delays should have been to trains to the east of Holborn, not trains moving away from it westbound. Why was our train held at Acton? Why was there another Rayners Lane immediately behind when normally after a delay nearly all trains are diverted to the Heathrow branch? Why couldn’t they tell us about the second train so that some people could have waited for it and reduced the overcrowding on the first? How can they possibly say, as they did several times over the PA, that the delays we were experiencing were due to an earlier fire alert? They clearly were not. They were due to the instructions that the trains should wait at Acton Town.

To my mind the purpose of a public transport system is to move people. Keeping the trains halted with people aboard, unless obviously there is a hazard ahead, should be anathema. I’d fine the operating companies for each unnecessary delay – just give me the power!
Posted by AnthonyG at 12:31 pm No comments:

It was just another sleepy Monday morning on the Piccadilly line. The train was in Sudbury Town station, on its way into London. Only half the seats were taken. The train was on time. What on earth could go wrong?

So imagine my surprise to hear the following announcement over the station loudspeaker system. “This is a message for the man who has just bought a ticket. You left your newspaper by the booking office”.

Let us put this in context. This is the transport organisation that blithely dismisses waits of 20 minutes for grossly overcrowded trains as “minor delays”. This is the Piccadilly line, which routinely fails to explain when trains are cancelled or to announce which trains are actually running at times of difficulty. This vital part of the entire London transport network will happily boast about there being severe delays 6 hours or more after a signal problem has been fixed. But today the comfort and well-being of one absent-minded passenger was enough to cause a normally mute announcer to leap to his microphone, clear his throat and broadcast a few well-modulated words for the edification of all.

No, I am not really carping [Seems like it from here: Ed]. It is really very nice that the station booking clerk took the trouble to make the announcement, rather than simply half-inching the paper and filling in his racing selections. Such a concern for one’s fellow man is the bedrock of the civilisation that binds us together.  In a small way it gladdens the heart. It’s just that [Here it comes: Ed], well, why if they can get the little things right why can’t they at least make some sort of effort to get the big things right?

Oh, well, I shall not be travelling regularly on the Piccadilly for much longer. My place of work is moving to Waterloo. More, much more, about all this and the searing implications for this blog, in due course
Posted by AnthonyG at 12:00 pm No comments:

An intimate conversation with 20 people

The Piccadilly line train heading westward out of London was fairly full last Friday. I was fortunate to have a seat; several people were standing around me. I had my mp3 player on but it was a radio show and at a low volume so I could also hear everything that was going on in the carriage. I became aware of one woman speaking quite loudly into a mobile, and found that not only was she effortlessly overriding the voices in my headphones, but several others were listening, and reacting, too.

She was talking to a husband or lover. She wanted him to take her out but it seemed he wanted to play rugby with his mates. If he came in late there was some food in the fridge.

The woman was aware that gradually we were all paying attention to her. She said something like “everyone’s listening, this is embarrassing” and a woman seated opposite interjected “Tell him to take you out”. The caller handed the phone across and said “you tell him”. The second woman spoke into the phone “take her out”. At this point everyone close enough to see was agog. The caller said “As a black woman I don’t go red very easily but I am now”. Then she said to us all “He’s got all his mates listening”.

I suggested we take a vote on it and there seemed to be general support for her position. The second woman handed the phone back and the caller invited us all to say goodbye to her boyfriend, which we did with a rousing cheer.

Nice to be able to sort the social lives of total strangers.
Posted by AnthonyG at 12:35 pm No comments:

Well, the heatwave broke with a vengeance yesterday. After a morning of steady drizzle, we thought it was clearing and went out shopping. As we left Sainsbury’s with a full trolley, the heavens opened and trapped quite a few people in the store or in their cars. There was a lull and we made it home but what came before was nothing to what came after. Sheets of rain, thunderclaps and dense black clouds overheads for hours. Over an inch of rain was recorded at Heathrow – about 15 days worth for a normal August. Our pond flooded for the first time in many months.

It’s a little odd because it has been much cooler this past week and it seemed the chance of thunderstorms had passed. And as for the forecasts of record temperatures in August that apparently some bookies were taking bets on a few weeks ago, it now seems as unlikely as a white Christmas. Mind you with the climate getting more extreme, this may be more likely in future.

Surprisingly there were no knock-on effects this morning. The tube was running well. Ruislip Manor station was affected by the water though, and not for the first time. They had to turn off the ticket machines because the rain was getting in from the platform level above. This is the station that was extensively rebuilt during 2005, let me remind you.

I had to go to hospital for a check-up this morning and so actually travelled into London around 11:00. Arrived at Acton Town to find a crowded platform and an empty Piccadilly pulling away – presumably defective. Everybody got in my train. Then they announced that the next London-bound train was on the adjoining platform so everyone got out again and crowded into a Piccadilly arriving from Heathrow. I stayed put and our train, blissfully empty again, left a minute or so later.

There ought to be a punch line to this little story but I can’t think of one right now.
Posted by AnthonyG at 10:40 pm No comments:

A trip to Dungeness

To Kent for a few days break and respite from the summer unpleasantness of commuting into London. By chance (and some cunning planning), we spent a night in a delightful guest-house in Dymchurch. At the bottom of the garden run the tracks of the Romney Hythe and Dymchurch Light Railway so naturally we took a ride on it, including the remote destination of Dungeness. 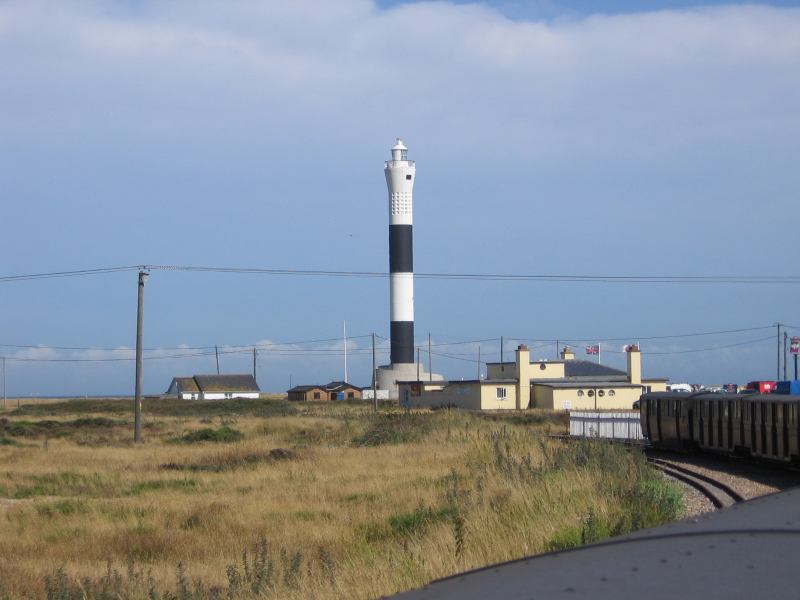 This railway was built in the late 1920s and has hovered on the edge of extinction for a lot of that time. Whilst it does provide a useful link between the towns along the seaward edge of Romney Marsh, its slow speed and limited schedule make it impractical for commuting and it must therefore rely on tourism. It runs on a 1 foot gauge, so the rolling stock is tiny – your correspondent could only just squeeze into the carriage –but everything is built perfectly to scale, as this picture of the locomotive shows. 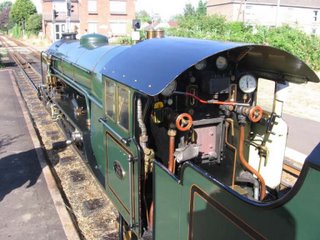 It is certainly the most relaxed railway I have ever travelled on. The driver chatted to passengers at each stop, we could open the doors and lean out to touch the bushes by the trackside as we passed, nobody bothered to check our tickets and the trains left dead on time (although with one service every 20 - 40 minutes, it probably wasn’t too hard to keep to the timetable.

It would be fun to commute this way but alas, not too practical.
Posted by AnthonyG at 6:28 pm No comments: