The Prime Minister is reported as making a fuss about propety ownership and the ease with which the true identity of owners can be hidden behind nominees, foreign companies and complex legal structures. This is, or should be, a non-problem. Simply require the holders of any property, when formally requested by an arm of HMG, to supply the full details of the ownership chain including the names of all ultimate owners. Failure to comply within a reasonable time - and I cannot see why this would take more than a month - would automatically pass the legal title to the property over to the State. Reliance on the secrecy laws of jurisdictions outside the UK would not only automatically involve the sequestration of the property but the arrest on criminal charges of money laundering and conspiracy of the UK agents and solicitors involved in the sale.  Job done.

Have freebie, will blog

A full page ad on the back of my morning paper features the well known tablet manufactured by a well known, hitherto tax-dodging1, e-retailer named after a famous river.  The strapline is "#Have Kindle will travel" and then there is a bit of blurb starting with someone's Twitter username (but not their actual name and I can't be bothered to look them up) saying he/she was asked to take one and how nice it was to read a book on it. In Turkey.

OK, setting it in Istanbul fills out the "have travel" bit nicely. It is irrelevant as a a selling point unless you believe that hand-held devices (such as watches, cameras, mobile phones, compasses, swiss army knives and the like) can only actually be used in one's home, and who knows, there may be many thousands of such techno-phobes who do indeed shake their heads mournfully and put their ballpoint pens carefully down on the sideboard before going out to the shops because "they don't work outside, I've been told; but anyway I don't want anyone not from our street breathing over it".

What gives me pause is that the person supposedly2 penning this stuff was given the tablet. Of course it accompanied them on their travels. So what? If you give me a free lawnmower I'll do you the courtesy of taking it for a spin round my front garden. I'll happily quaff any reasonably authentic Scotch single malt should you proffer a bot. of same. Though it is more than 30 years since I abandoned using the stupidly overpriced products made by a famous company named after a fruit (and I don't mean Apricot, computer history buffs), I wouldn't chuck one away if they came round and presented me with one of their latest models and said "Go on son, the gigabytes are on us".

In short, testimonials from people who shell out their own cash mean something. Endorsements from those fortunate to have first class seats on the gravy train do not. Having said that, if you would like a favourable mention in these hallowed columns, then your course of action is clear.

2. I'd like to believe it because the text cunningly says almost nothing about the device and is mainly about the writer boasting about re-reading a book by Haruki Marukami3. But an ad means an ad agency and we all know who writes the copy for ad agencies, don't we boys and girls?

Those awful advertising slogans - no 7. Boots

Now how could Britain's favourite chemist have offended me? Unlike the other businesses featured in this occasional series, they retail the products of others. Surely it is the producers of ludicrously overpriced perfumes and the like who should face my ire?

No, let's stay focussed. For it is Boots itself that has sought to appropriate a commonplace saying and make it their own. Let's Feel Good. I mean, what does that say about them? Is some rival putting up posters with "Let's feel really awful today?". Who on earth doesn't want to feel good? Do you wake up some mornings, stumble blearily out of bed, chuck a shoe at some cat fighting in the alley outside your tenement and think "Today I want to feel good so I'm going to buy some bath oil?" Shopping is shopping. You go to the shops, buy what you want, go home. If you feel good before you start then fine. If not, buying things is not going to change anything (although it may put a smile on the face of the branch manager).

Not content with trying to associate "goodness" with "stuff you get in a chemists", Boots put the insufferably twee and patronising "Let's" at the start of their wish. It makes it sound as though we, the public, are somehow involved, that this is really our slogan and Boots are just joining in the general expression of well-being. But my friends, never forget that an adman wrote that slogan and admen have no souls or morals. I'll choose my feelings, thanks very much, and I don't need the marketing department of any corporation telling me what they are.

A six iron, I think, and get the secateurs ready.

I went for a real ramble today, around the woods and open country that surrounds Ruislip Lido. There was a pleasant surprise at the halfway point, on the Northwood golf course. Last year they cut down a long hedgerow along the side of one of the fairways. This year I was delighted to see a blaze of colour from an extensive wild flower meadow that has taken its place. 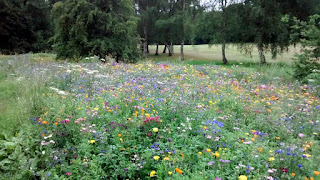 The TGV that wasn't

A very refreshing holiday that began with a Eurostar enroute to Amsterdam and finished in Avignon concluded yesterday with the return home. The TGV was supposed to deliver us to Lille about 40 minutes before the Eurostar connection for London. The turmoil at the freight terminal that had suspended services just two days before we had set out seemed to be over. For once there were no strikes by French lorry drivers, blockades of the terminals by fishermen or action by air traffic controllers (and that must be pretty rare). But of course a smooth journey home following our memorable cruising across Europe was never going to happen.

Avignon has a gleaming new station dedicated to the high speed services. In a few months Eurostars will be running there. Despite the heatwave it was reasonably cool as we we waited for the arrival of the train that was starting in Marseille. I noted, with that queasy but undefinable feeling of unease familiar to experienced travellers, that all the preceding TGVs were flagged as 5 or 10 minutes late, though ours was not. But it arrived late and it seemed to dawdle for a quite a bit and then as we pulled out of Lyon we slowed to a crawl and, having crossed the Rhone, stopped dead. Not necessarily a problem, you might think. Then the lights went out. Followed by the air conditioning. This is a problem, you would think and, my friend, you would be entirely correct. I became very uneasy when, after about ten minutes of nothing, a man looking a bit like Superintendent Drefyus' assistant in the Pink Panther films walked down the track as if looking for his keys which he was pretty sure he had dropped somewhere in the vicinity. About ten minutes later he walked back. I could not determine if he had found his keys. The lights and aircon came back on. And then we creaked away, with a muttered apology over the loudspeaker about "technical problems".

The train was very fast after that but unable to make up any of the lost time. We played with emergency strategies, including moving our luggage to the doors to make a really fast getaway in the hope of racing down into the Eurostar departure lounge in time to shout "hold that train". But it was not to be. With exquisite timing, as we debarked at Lille on one platform, we saw our Eurostar leave from the one adjacent.

Actually the Eurostar people were very good. Knowing that there were delays on the TGV connections, they were fast to give us tickets on the next train out, and we were lucky that there was plenty of room on it, and we arrived at St. Pancras having missed the rush hour which was a sort of bonus.

This is not the first time I have had to moan about the TGV service. It's a bit like my days commuting on the Piccadilly. You just know something will screw you up.
Posted by AnthonyG at 12:55 pm No comments: