Good title eh? A trifle misleading perhaps but you have to pull the punters in somehow. Actually it was more of a sort of bridge year, the year in which I finally handed over all financial responsibility from my old job (which I had been doing freelance since 2011 anyway) and nearly all of the rest of it as well. For the first time since I started school I have gone through the Xmas break without once thinking that it will soon all be over with a return to studying/exams/work.

A couple of days ago Mrs. Commuter and I celebrated our Silver Wedding with a nice family party in a very pleasant venue nearby. The best part was watching the younger generation (and I mean the very young) running around with the total enjoyment of making a noise and living entirely for the moment. I sometimes feel that I can do that now (and I don't mean run around shrieking); I mean live more for the moment and worry far less about what I have to do tomorrow. Time is much more elastic. The weekend is no longer the special time for relaxing and for doing the weekly shop. And of course, though I still check on whether the trains are running normally I don't really give a toss if they are or not.

Where has the search box gone?

The search box, provided courtesy of Google and hitherto placed handily at the right of this column, has ceased to function. There is a workaround which I don't understand. So until they fix it properly, it is removed.

I follow the fortunes of two football teams.  In the past I have regularly attended matches of both; nowadays I only go to the very occasional match of one of them. Team A is in the football league and team B some way below.

So, yesterday both of my teams were in action. Both were playing away. Both played teams based at the seaside, indeed in well known seaside resorts. The names of both of the opponents begin with the letter "B". My teams won the games, each by a margin of 2 goals. As a result, team A head their league and team B are second in theirs but with games in hand on the leaders.

Spooky or what?
Posted by AnthonyG at 1:09 pm No comments:

Steaming on the Met

As part of the celebrations of 150 years of the London Underground, a steam-hauled service ran half a dozen times today between Harrow and Uxbridge. Tickets on the train sold out long ago. I joined a number of enthusiasts at Ruislip Manor to watch it go by.

It was rather a surprise when an "A" stock appeared first - I wondered if this was some form of tribute but it was the rail adhesion train going in the other way so just a coincidence. Quite nostalgic to watch it dwindle toward Eastcote -how many times in my commuting past have I run up the stairs and emerged panting on the platform to see this very sight? 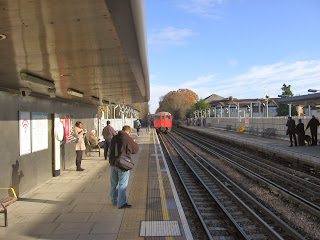 Then with uncanny timing a London-bound Met managed to obscure the arrival of the sight we had all been waiting for, producing the odd appearance of an 'S' stock wreathed in smoke. 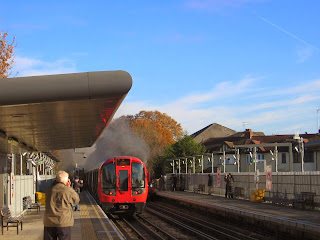 Fortunately the interloper moved off in time and the star appeared. 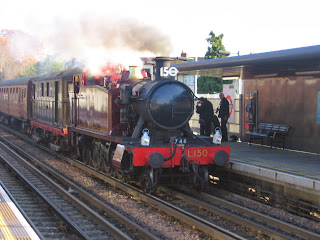 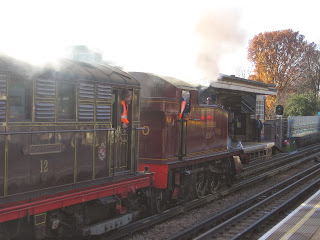 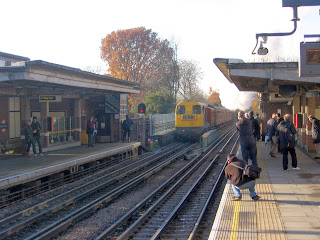 This was one of the most eclectic assemblages of rolling stock one could imagine. Behind the steam loco was the venerable electric loco Sarah Siddons. A Class 20 Diesel, looking completely incongruous on a tube line, brought up the rear. Sandwiched between them were a number of ancient carriages including an1892 'Jubilee'  which I snapped on its final run in the twilight, hence the flash and the slow shutter speed. 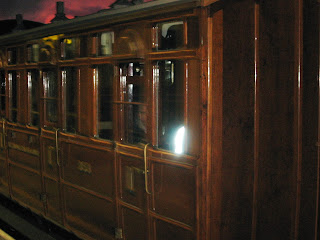 This grand carriage was once used for commuters from Aylesbury and beyond. They don't make 'em like that any more.

Posted by AnthonyG at 6:17 pm No comments: