A weekend away at a smart hotel near Bristol and a visit to the SS Great Britain. This ship, the first modern passenger liner, and one of the first to be built of iron and to be powered by steam and propeller, showed the world what the industrial age was all about. But the most eye-opening part was to see the incredibly cramped and basic conditions in which most of its passengers - the steerage class - travelled.  Here is a picture of a 4-berth compartment. 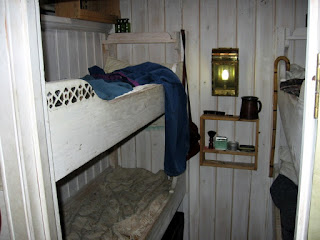 There was no other sheltered space provided - no lounges, no bathrooms, absolutely nowhere for privacy or peace and quiet. The passengers could always go up on deck of course - provided they stayed the right side of the white line painted on the deck that divided the ship in half. Only first class passengers could walk in the rear half. And people travelled this way across the Atlantic and even to Australia. Certainly puts our day to day commuting problems into the shade.
Posted by AnthonyG at 8:42 pm No comments:

Although I cut my computing teeth on Apple computers (the venerable Apple IIe way back in 1981 actually) [I had a Sinclair with a silly rubber keyboard: Ed] it has been a long time since I owned anything made by what I gather is the world's most valuable company. One reason, really an emotional rather than a logical one, is the irritating attitude of its followers, the people who go "whoop" at announcements of anything new even though it is exactly the same as something they already have, the people who always say their computer is an "Apple Mac", like there's loads of computers called "Mac" so they have to distinguish it with the prefix, the people who say how user friendly Apple products are (and keep quiet about the way every time Apple updates the operating systems it makes software that these people have previously paid good money for obsolete), and oh most of all the High Priest of fruit-nomenclature gadgetry, Stephen Fry. Sorry, I know he's a very very clever and witty man but "his smug, everything Apple does is so cool and by the way did I tell you that I got the latest whatever-it-is free (and before any of you plebs did) because I'm so wonderful" manner gets so far up my nose it comes out the back of my head and is off down the High Road into the distance.

So imagine my surprise and reaction to the much leaked news that the world's ponciest, let's charge twice as much as anyone might think and we'll get away with it because it is so reassuringly expensive, corporation is to issue a watch. A smart wristwatch. Never mind your iphone or ipod or iglass or whatever, they are all obsolete because now you have to put something on your wrist. And if you want to know the time do you have to talk to it and wait for a computer to say (hopefully in Dalek tones "It is ten after three and you are late, earthling" or must you jab away at a dinky little keypad in a manner reminiscent of the first generation of these products that Douglas Adams so memorably satirised in Hitchhikers  - " a planet whose ape-descended lifeforms are so amazingly primitive that they still think digital watches are a pretty neat idea."

My watch is a Casio. It tells me the time (and because it is digital, I really mean the time, not the approximation of a couple of hands pointing roughly at a dial), it has an alarm and a light. It cost about £26 and I have had it years and years.  No, it is not smart but if it breaks I don't care because I shall buy another at the same amazing reasonable cost and it works whether I have an internet connection or not and it does not have bloody iTunes. So when the queues start forming outside the Apple Stores you will not see me there. But you may get more vitriol later when we learn more about the iWatch (or is it the iTimepiece, the iChronometer or the iDontCareItsLotsMoreLovelyMazooma?) Because it is such a fun subject to write about, and in the immortal words of Lady Constance de Coverlet "For fun I'd do anything"

Posted by AnthonyG at 5:42 pm No comments:

The words and the deeds

As my morning Met train approached Harrow-on-the-Hill this morning, my fellow passengers and I were greeted with a positive deluge of helpful information from the driver. He told us where our train was going (a slow train to Baker Street, and this is germane to the issue), advised us which platforms to take if we wished to go to Amersham and even where to go to catch a Chiltern Line to Aylesbury Parkway.  The idea that anyone might be going to Aylesbury seemed pretty outlandish - the idea that they might not know how to do it and were relying on the driver to explain it was, quite frankly, bordering on the grotesque.  But never mind that, he then told us that due to a speed restriction we would make a slow approach into the platform and apologised for the inconvenience.

What a courteous man. And as we crawled at walking speed into Harrow there was a nice fast train to Aldgate waiting at the adjacent platform. I, and most of my companions readied ourselves to debark and catch it. Now I am sure that regular readers can fill in the next line but for the benefit of newcomers to these parts, just as we were ready to open our doors the other train closed its, and off they went. Bingo, my journey time lengthened and an uncomfortably full Circle Line to take at Baker Street in place of a comfortable seat on a through train.

You see, that's the thing about travelling on the tube. Plenty of genuinely useful words but when it comes to practical co-ordination of train journeys, well, the lights are on but not only is there nobody home, they've gone away for a long holiday, cancelled the milk and given the au pair the rest of the summer off.
Posted by AnthonyG at 5:29 pm No comments:

Arthur C. Clarke was one of the most respected writers of science fiction. Best known for 2001, he wrote convincingly about space travel, the colonisation of the Moon and other parts of the Solar System and how fundamental scientific principles might be used to overcome the huge hazards and costs of these ventures.  But he didn't know much about computers, even though his HAL, the computer that runs amok in 2001 is the most famous example of its kind. I have been reading 2061, a follow-on to 2001 and its successor 2011. Clarke depicts his hero, Dr. Floyd, thinking of a line of poetry, trying to recall the author and musing that no more than ten minutes on the world's computer network would produce the answer. So I took that line of poetry and put it into Google and got the answer at once. In 2013, only 26 years after 2061 was written, we can do better than Clarke imagined would be the case in 48 years from now.

Actually Clarke was not alone. Isaac Asimov, no mean scientist himself and author of a huge number of SF books, was obsessed with the idea that one computer (which he amusingly called "Multivac", probably a jibe at the Univac series of early computers) would do all the world's computing and only men wearing white coats would be allowed anywhere near it. Oh, and all communication with it would be by punched cards and input tapes. In his most famous work, Foundation, set thousands of years in the future, he envisages his scientist heroes using "calculator pads spotty with age", although to be fair, they can control their monitor displays using brain power alone (but I suspect that we may be able to do this in a generation or so).

Cheap and fast space travel is as far away as it was when 2001 was published but the leaps in computing power enabled by networking and by the Internet have surpassed the imaginations of some of the giants in SF. Funny, eh?