Europe is sweltering in the traditional late-June heatwave and even here in beautiful Ruislip we have 31c with several days of it still to come. The rich smell of barbecues is drifting along the breeze. Recent summers have tended to be disappointing but this one has already delivered a long sunny spell and now, in UK terms, some real heat and little prospect of a set of traditional thunderstorms to ruin it.

Alas, there is far less satisfaction to be had than might have been the case. We woke on Wednesday to hear the hideous news that an entire tower block of flats in Kensington had been consumed by fire, with 58 confirmed deaths so far and many residents missing. Normally such fires spread gradually either up or down but this one spread so fast in both directions that the whole block was quickly ablaze and no possible rescue could take place for the hapless folk trapped inside. A public inquiry will establish what happened but it seems that cheap cladding, rather than slightly more costly fire-proof cladding, was the reason that it spread so fast. That this should happen in the richest borough in London speaks volumes for our divided society.

A more natural type of disaster, but just as devastating, began yesterday in northern Portugal and is still on-going, Temperatures in Iberia have topped 40c and massive forest fires have overwhelmed the emergency services, spreading so fast that many died in their cars trying to escape.

The downbeat public mood was made visible in the Trooping the Colour ceremony yesterday to mark the Queen's official birthday. The crowd that flocked down the Mall to join the royals as the RAF flypast thundered overhead at 1:00pm was noticeably down on recent events.

All this amidst the chaos of a Government that has thrown away its majority and must now cobble together some sort of policy. These are troubling times, my friends.

Posted by AnthonyG at 5:57 pm No comments:

I have never used facebook (except years ago under a false name for reasons connected with my job). Recently I wished to join one specialist group and created a new profile under my real name. No problems getting in, other than:

But today I am told for "security reasons" I must send them a photo of myself and the account is disabled.

I have done absolutely nothing with this account other than connect to the group I mentioned above. They have not told me what the security reasons are. They have no way of knowing if the new photo I sent is really of me because I only uploaded one other selfie before and both could be of someone else.  I registered my mobile with them but they have not bothered to use it to help to verify my account.

I don't need this frustration.

Election 2017: Is Mrs May bonkers or just daft?

Prime Minister Theresa May is widely reported as having said that, following her wilful destruction of her party's majority in the House of Commons, that she would now govern with the aid of "her friends" (The DUP) and then said "Let's get to work". The "work" is the Brexit negotiations.

Nobody asked you to call the election. Nobody is preventing you from getting to work. You were at work before, were you not?

A less deluded person might have mused that maybe the mood in the country should be taken into account. But no, somehow the votes cast last night are irrelevant. The only thing that appears to matter is the votes cast in the referendum a year ago. Those votes are sacrosanct. The wishes of the electors now are not.

And politicians wonder why they are often regarded with contempt.

Posted by AnthonyG at 5:38 pm No comments:

Election 2017: The Fickleness of Fate

After the election nobody wanted, the result that nobody expected. The nation rejected "strong and stable" Theresa May, snubbed "Another Independence vote, mebbe" Nicola Sturgeon, gave a resounding two fingers to UKIP and hesitantly moved a little toward the distinctly non-strident Labour and its hitherto much-derided leader Jeremy Corbyn.

May's gamble - calling a snap election to achieve a strong majority in the House of Commons - has failed. The Tories have lost 12 seats overall, despite some significant gains in Scotland (up 12 seats). There should have been a swing to the Tories against both UKIP and Labour, based on their incumbency and the presidential nature of May's campaign. But packing the cabinet with Brexiteers who projected a "We won the referendum so we can do anything we like" attitude has backfired badly.

The results in Scotland, where both Labour and LibDems recovered seats swept up by the SNP last time, makes the overall picture harder to interpret but it does seem to fair to suggest that voters are split 50:50 between broad right and broad left in England & Wales and more tilted to the broad left (including SNP) in Scotland. This strengthens the hand of the Remainer /Soft Brexiteers. However, with Brexit negotiations due to start in 10 days and a weak government about to be take shape (minority Tory propped up by the DUP according to this morning's news reports), the UK is in a febrile state. Will this make the outcome worse, with the government unable to make any compromises and unable to make any deals for fear of plunging itself into turmoil?

Just as in those dramatic days in 2010, we now face a period of intense horse-trading, bluffs, personality clashes and individual bids for power. Will a tired and undoubtedly shaken Mrs May (no matter what she might attempt to portray in public) have the strength to see it through? We will find out very soon.

London Bridge and the Election

Mrs Commuter and I escaped the election for a blissful week of cruising down the Rhine and into the Main, visiting several spectacular medieval towns in the "Franconia" region of Bavaria. Alas, we could not escape the terrible news of another terrorist attack on London; in a copycat of the Westminster Bridge attack, a group of lunatics attacked people near Borough market and killed eight before the police got them.

The pressure on politicians to make instant reactions is overwhelming. Today it seems that the Conservatives would like to ditch some of the human rights laws and have longer prison sentences; their inability to understand that the attackers do not care about prison is deeply worrying. This is the same party that is proposing to cut the budget allocated to the police.

On our return we found another A4 flyer from the Green party, a leaflet from the LibDems (who continue to make Brexit the key issue) and no less than two colourful leaflets featuring Brexit betrayer B. Johnson. His slogan "standing with Theresa May" may well send shivers down the spine of the PM when she reflects on how he supported his dear and faithful friend Dave.

The election is tomorrow and we shall be glad to be shot of it, to be honest [I thought we were always honest: Ed]. How this country negotiates a new future with the EU remains the single most important political choice and I don't have the slightest idea what the options are, not least because so much depends on the other 27 member states who are themselves considering their positions. This country will presumably opt for "strong and stable" (and she never panics, at least not too much, well,okay a bit, well, quite a lot really but no worse than anyone else would) Mrs May in the same way that Germans have put their trust in "mutti" [Angela Merkel:Ed]. Labour will have another bitter period of in-fighting and I look forward to UKIP splitting into "Continuity", "Real" and "Original" factions who can spend the next five years denouncing each other.

Or will Jeremy Corbyn confound the polls (and this columnist) by winning?

Anyway, returning to the holidays theme with which I started, it's been a long time since I put up a tram photo. Here is one in Wurzburg where an inattentive tourist is about to get a nasty shock (it's ok, she was not struck) 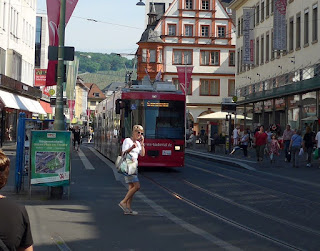