The Prince and the Meteorologist


Leicesterarians1 looked at the snow falling, and read the unseasonal weather for significance. "Prince has just died and he wrote a song called Sometimes It Snows In April" said one man to his friend. "It's a sign, isn't it?" His friend nodded sagely.

Deconstructing the mindset that attempts to link
would, I believe, would take more words than I fear Messrs. Google would let me employ, as well as using up all of my precious supply of italics and exclamation marks. I do, however, admire the friend who sensibly confined his response to a nod instead of suggesting that the speaker hand himself over to the psychiatric wing of the nearest hospital for the severely impaired of thinking.  Sometimes a sage nod is the best thing to calm down a dangerous lunatic who no doubt reads signs in his daily tea, counts the magpies that cross his path and does the lottery because "well, you know, everyone gets lucky sooner or later, don't they?"

My interest in this story is not with the men from Leicester or their team, to whom I genuinely wish good fortune, but with the afore-mentioned extinct pop singer. I was hitherto aware of only one title penned by the monosyllabled warbler, because the Today programme insisted on playing a few seconds of it when covering the story of his death. This recording is called Purple Rain.   Hmm. A song about rain and now there's one about snow. Is there a trend here? And that gut-wrenchingly, true to life scream of raw emotion that only a true artist, whatever he was formerly called, can summon up. I mean, April is well known for being the cruellest month but to be informed that sometimes it snows as well, how much more can a span of thirty days take? Are people looking up to the skies e'en as we speak going "Any snow visible? According to Prince it sometimes buckets down at this time of year, better get the skis down from the attic and cancel the barbecue".

Of course it sometimes snows in March, not to mention nearly all of the other months. It often pisses down with rain and Mrs. C and I have only this week been in beautiful North Norfolk where it was hailing fit to bust and with a wind coming off the North Sea that would freeze your nadgers off, if you left them exposed for long enough.

I suppose pop singers get sick of going on about the girl they love who doesn't love them, or the girl that does love them, or how nice it is to be in love or how unpleasant to be out of it, or wouldn't it be nice if everyone was in love, and the rest of it. It is certainly comforting to us Brits that Mr. Prince (or was that his first name?) should turn his attentions to one of our favourite subjects for conversation, and how unerringly he hit the target. Yes, it does indeed sometimes snow in April and no-one could argue with that, at least no-one round these parts can, I don't know about his followers in places like Arizona and Sao Paulo [Brazil, right? Ed] but I suppose they have their own evocative ditties. Occasionally We Get Rather Hot or Now And Then There's A Few Clouds Of An Evening, that sort of thing.

I'm playing with the idea of making a few hot waxings about things in beautiful Ruislip. The album will be called You Wouldn't Believe How Wet It Was Last Thursday and potential tracks include Wind Over Ickenham, Bloody Hell It's Cold Today  and The Those Sodding Pipes Are Frozen Again, Blues. Kickstarter, here we come.


1. I have no idea how to pronounce this and suggest you don't bother trying either.
Posted by AnthonyG at 2:26 pm No comments:

The EU Referendum 7 - Obama puts his oar in

President Obama, currently visiting the UK as part of his final year in office farewell tour, has come out firmly in favour of the UK remaining in the EU. He emphasised that the USA would give preference to dealing with the EU with the UK being "at the back of the queue".

Leave campaigners have been scornful of his intervention and Boris Johnson accused him of hypocrisy in that he was advocating policies for us that that he would never apply to his own country.

Boris is wrong on the biggest issue here. The US is itself a federation of states, each of which has chosen to join. From the other side of the Atlantic, it looks as though the EU is slowly moving down the path the Americans took more than two hundred years ago. Obama takes for granted the benefits of such a union and is therefore only voicing the obvious when he relates his own country's policies to ours.  Whether he should have intervened at all is another question. Let us answer it with a simple analogy, one that the Americans themselves have made. I see my friend about to drive off, having drunk more than enough to impair judgement. Do I say something or do I say "No, I must not interfere with his right to injure or kill himself and others?". No-brainer.

Finally, consider that Obama will say whatever he thinks is right for America. In other words, his comments are based on a hard-headed assessment of US interests. So do their interests and ours coincide? In general, yes they do. We want to trade freely with the US and we want US investment here. Our cultures and histories are closely aligned. We are military allies. Would Obama want us to undertake a course of action that would weaken us? Clearly not. When he advises us to remain in the EU he is not trying to make his country better off at our expense - he is trying to do the best for us both.

Those awful advertising slogans - no 10. Dolmio

Here's a nice example of what happens when the desire of admen to lie create an image for a product runs up against the truth. Dolmio is a range of "Italian" sauces made by food giant Mars. I don't eat them. The adverts have for some time featured puppets speaking comic Italian (putting an "a" on the end of English words) and make great play about the naturalness of the products.  The puppets are seen out in the farm collecting fresh produce and stirring it up.*

Since the jar contains a "careful balance of ripe tomatoes and basil" it is odd that Mars have now issued a serious health warning. Apparently this natural farm-produced sauce has so much added sugar, salt and fat that it is not advisable to eat it more than once a week. Although this story has been covered widely, it has, strangely, not made it to the "What's New" section on Dolmio's own website where instead we are informed that the makers are "passionate about food".

Ah well, there are plenty of foodstuffs that should be eaten in moderation and where the most flavoursome contents are down to things we really need to be careful about. But in this case I can't help but recall the slogan that our trusty peasant puppet mouths while holding up the shiny jar (as shown in the picture above) - "When's-a your Dolmio day?" That's easier-a to answer, Luigi. Not today, not tomorrow, not never. Ciao.

*That is, stirring up the sauce. I'm the one stirring it up in terms of putting the boot in.
Posted by AnthonyG at 9:48 am No comments:

The EU Referendum 6 - How much more exciting can it get?

The following leaflet dropped through my letterbox the other day, as it doubtless did in many million households in the UK. It's a snappy title, is it not? Leaving aside the fact that, as several Cabinet ministers and many junior ones are opposed to remaining and therefore the leaflet cannot really claim to speak for "the Government", it is the sheer length of the thing that baffles. 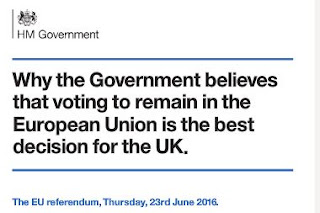 I mean, it doesn't actually trip off the tongue. They can never make a film out of it, there wouldn't be enough room on the posters. Referendum - this time it's political, perhaps or Cameron - road to redemption.

The contents of the leaflet are a few pages of simple assertions about the importance of the EU to our trade, and a lot of play with the uncertainties of leaving. And, in the section describing the impact on the cost of living, there is a full page picture of a shopping basket, so those of you desperately unsure about what prices and household goods and shopping are, can see for yourselves. I don't think this is good enough. I want a picture showing two men. One, strong, well-dressed, perhaps with some fashionable tinted glasses, should be looking confidently out toward a rising sun over a beautiful rolling landscape. He can be captioned "Mr Yes". The other, scruffy, unshaven, with one dangling earring and half a rollup in the corner of his mouth would be staring unhappily at a dustbin in a dark alley. He would bear the title of "Mr No". This would make everything totally clear and end all possible arguments.

(note to commissioning editors for HMG: I am available at a surprisingly reasonable fee for consultations on Government publications.)
Posted by AnthonyG at 3:39 pm No comments:

Round about this time of the year I usually do a piece about the change in the weather, the buddings on shrubs, the re-emergence of the goldfish from the depths of the pond and the absence of frogs. So why make an exception this year? Over the past couple of weeks the shift from winter to spring has been pronounced. The air is now warm, everything is growing and of course the clocks have gone forward giving us longer daylight evenings.

It is the same every year, but it still fascinates me that the goldfish, who were barely visible all through the winter and who scorned each attempt to entice them out, are now basking and quick to respond to food scattered on the surface. Is it the light, the increasing length of the day or the warming of the waters that switches them out of their torpor?

I noted in 2008 that sparrows had made a reappearance (after years of decline) and I think we now have a pair nesting in the dense shrubbery that has completely overgrown one of our fences.

Oh, and I found a dead rat on the front lawn yesterday. Presumably killed by a cat and dragged there, having ventured too incautiously to sniff around the dustbins at the back of one of the nearby restaurants. Or a sinister warning from a local crime boss about my encroachments on his territory? I'll put Luigi, "Mad-Dog" O'Reilly and Crusher Wilkins on guard duty just in case.
Posted by AnthonyG at 9:43 am No comments: