...do advertisers think it smart to use the word "grab"? A mobile phone company invites us to "grab" a deal while stocks last. A cable TV supplier asks us to "grab" its latest contract for phones, TV and internet. There are plenty of other examples.

To grab means to seize possession of something, regardless of the wishes of anyone else. Children may grab the last biscuit. Raiders may both smash and grab as they batter down the windows of jewellery stores. But if you enter into a contract, which of course is essential when doing mobile phone or TV/Internet deals, then nothing is grabbed. Instead you, as consumer, make a offer to purchase the services or goods supplied and the supplier accepts or declines your offer. Nothing takes place without their consent so nothing is grabbed at all.

In olden times we might have been urged to "take advantage" of a special deal, or perhaps urged to "buy one while stocks last". Now the deadly hand of the admen is destroying yet another perfectly sensible word and changing its meaning. We have lost "ultimate" and "exclusive", "special" now means ordinary and "grab" is changing to mean nothing more than either "take" or "purchase".  But it shouldn't. Consider the phrase "I'll just a grab a coffee" which I believe is coming into common parlance. No you won't, my friend. If you go into a coffee house, you need to order one, pay and wait while the barperson presses the shiny levers and makes whooshing noises before collecting your plastic cup which will probably give you third degree burns. Grab a hot coffee and you'll have the law after you (and you'll get second degree burns plus unpleasant brown stains down your trousers). If the word is used correctly, it works. And if only admen stopped misusing it, maybe it would revert to its real, useful, meaning in day-to-day speech.

Tube website "upgrade" - Will somone tell me what is going on?

It used to be easy, using the London Underground website, to see what trains were due at any station, making it easy to plan your travel. You can also use dedicated apps for smartphones. And just as well because while those apps continue to be well designed and useful, TFL have revamped their website and ruined it. Look at this picture which is supposed to show arrivals at Ruislip Manor: 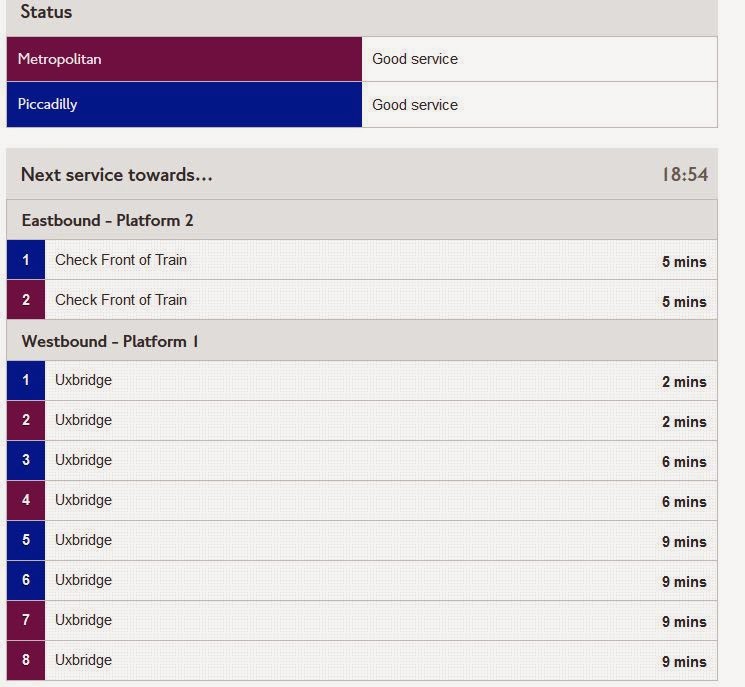 The eastbound arriving train is designated as both Metropolitan and Piccadilly as are the first two Uxbridge-bound. And then we apparently have two Piccs followed by two Mets, each arriving in tandem. What on earth? The line controllers know which is which. My smartphone app knows. But they can't put that info on the website (and don't get me started on the platform electronic displays which still, after 8 years, show nothing except the direction of travel and they even get that wrong! (They show London-bound as southbound, rather than eastbound). Curiously, the direction of travel is correctly shown on the website example.

So, if I need to know when the next eastbound Met is due in, no point in wasting time looking at the official website. By the way, the "check front of train" is another symptom of one part of the organisation not talking to the other because, of course, the destination of each train is assigned before it starts each journey.

Perhaps these are just little glitches and will be sorted soon. On a more positive note, you can now see bus arrivals at the station as well so credit to TFL for this bit of long overdue integration.

Encircling London - a trip on the Overground

A warm and pleasant day, Mrs. Commuter busy with music making in Sheffield so what better way to celebrate the continued ownership of a Boris card (free travel anywhere on the trains in London) than by going right around the city on the (fairly) new Overground system.

For those unfamiliar with London, the Overground comprises a group of train routes previously part of the national rail network together with what used to be the East London Line that was one of the oldest sections of the misleading named Underground (the core of the London Transport system). The Overground, which is indeed almost entirely running on surface tracks rather than tunnels, has its own distinct trains using overhead electric pick-ups, and unlike the normal tube lines which basically go from A to B with the odd spur going to C, it provides a rather bewildering choice of routes with several spurs branching off from the two main lines - one the straight line from Watford to Euston (which shares much of the track with the Bakerloo) and the circular route which itself is comprised of two bits, Clapham Junction to Highbury through South and East London, and Clapham Junction to Highbury via Willesden Junction (where it crosses the Watford/Euston) route and crossing North London also arrives at Highbury. So you can go right around London, clockwise or anti as you choose, but you have to make at least one change depending on where you start from.

With me so far? It doesn't really matter. I left beautiful Ruislip at 2pm and returned at 5:30. The circuit took just under two hours and the rest was needed for my cunning route to Northwick Park, the short walk to Kenton and then the Overground down to Willesden Junction to start the Great Circle route. Included in this was a sort of  railway connoisseur's bonus -  a final frustrating fifteen minute hold up on the Met due to a signal failure, requiring us to pass the benighted piece of unhelpful metal with a red light showing, which forces the emergency brakes on.

This trip highlighted some of the unloveliest parts of London, with special emphasis on railway yards, disused warehouses, streets of dense terracing,  and huge areas of factory and light industrial buildings. But it also featured fascinating views of the Shard, looming across the suburbs of South London in  way reminiscent of Mount Everest seen from miles away in Tibet ( which I was privileged to do in 1986), the amazing railway architecture of Willesden Junction station where one part of the Overground crosses beneath the platforms of another and the lovely crossing of the River Thames near Chelsea Harbour where the line swings round in a huge curve into Clapham Junction. 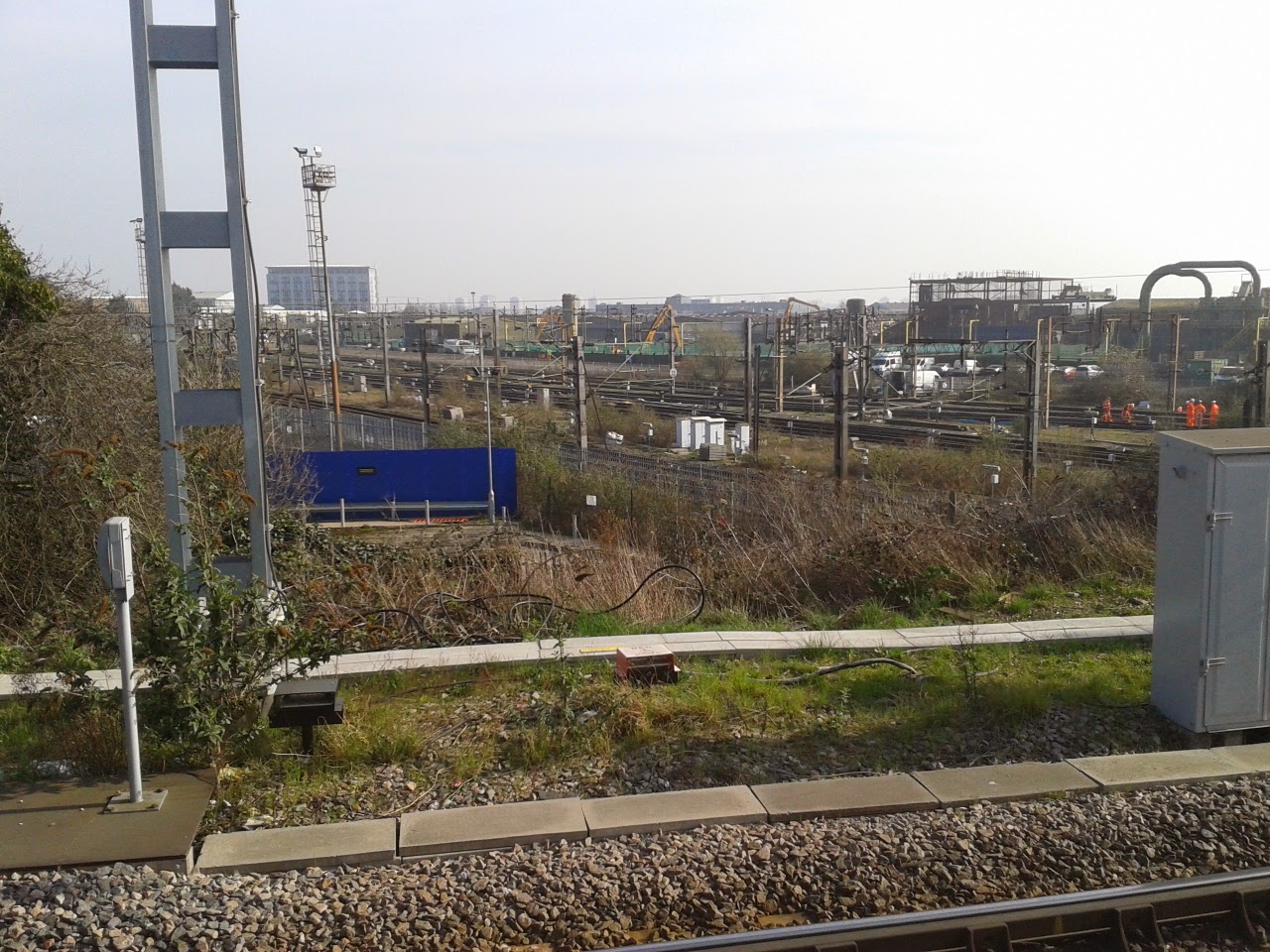 The pic above shows the unglamorous view around Willesden Junction and the one below the line to Highbury - the line to Euston emerges at right angles to the platform in the middle right. I omitted to take a decent picture of it. 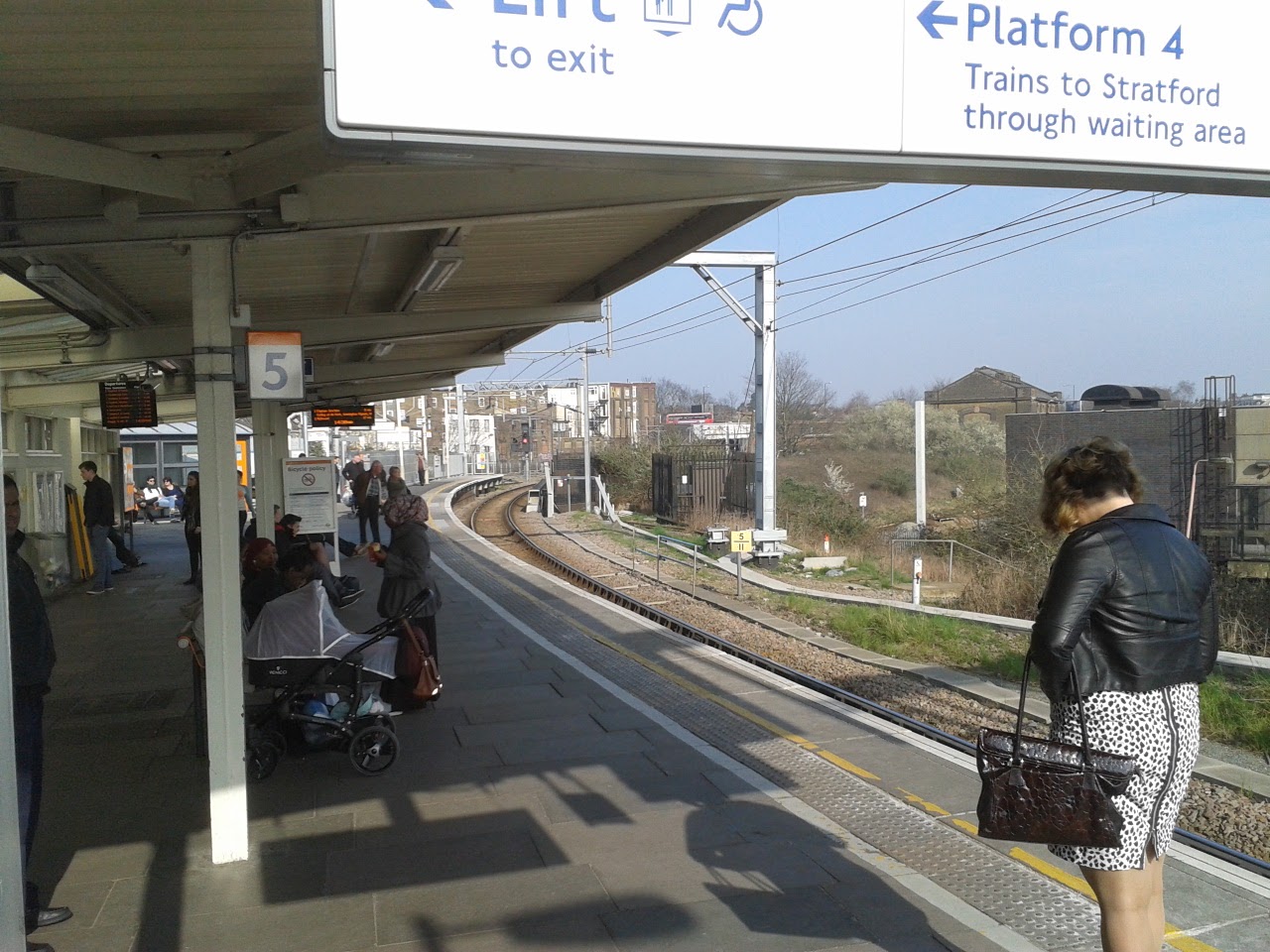 The feel of the Overground is, for the most part, still much closer to its British Rail origins than to London Underground.  This view taken at Highbury shows why 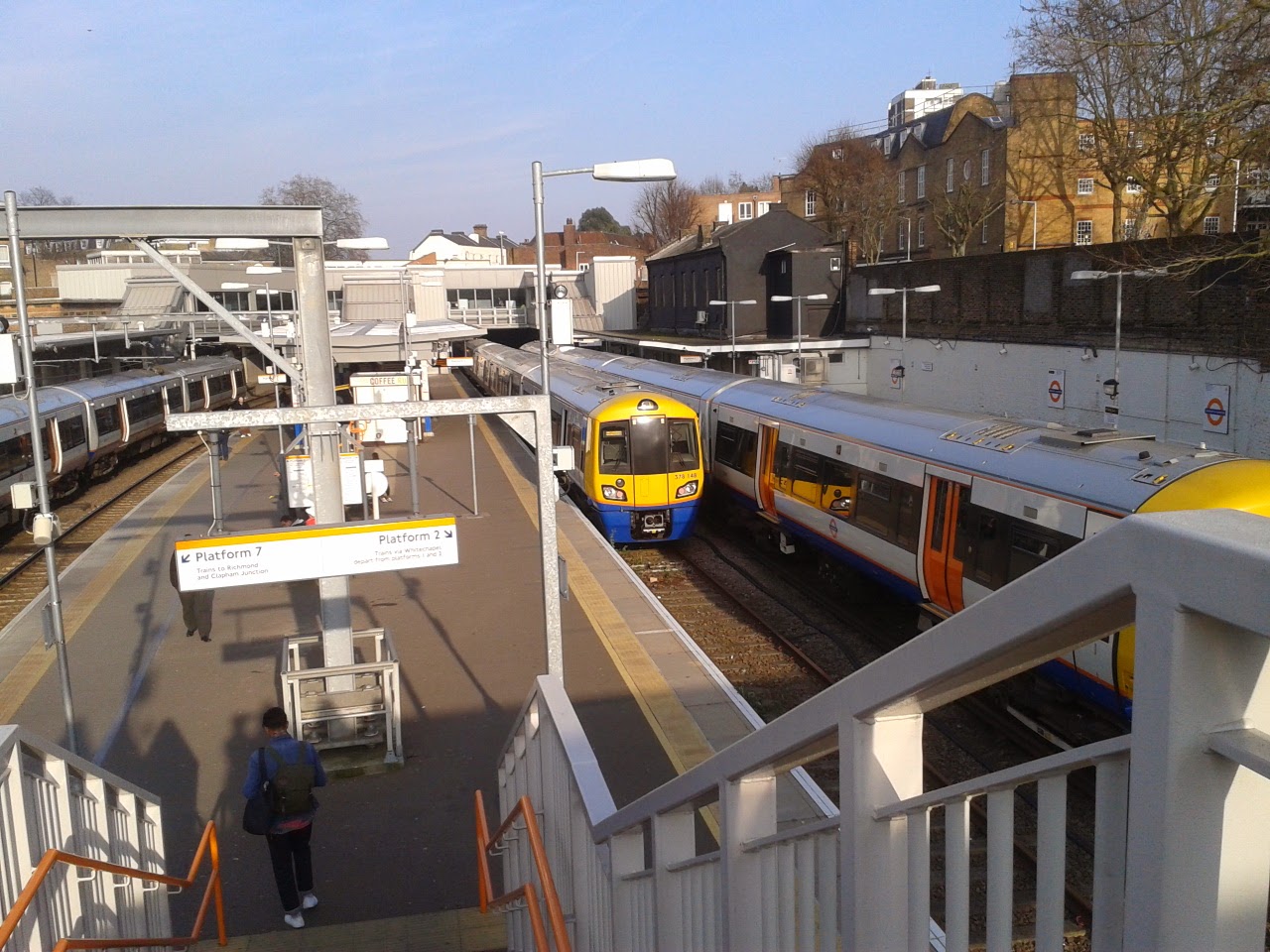 The entire trip was some 42 miles averaging 12 mph - not particularly fast and the Overground trains rarely reached the sort of decent speed that the Met can manage (on a good day, not today) but then why should it? Nearly all of my fellow passengers were only on it for a few stops. A lot came and went at Kensington and at Brompton, for the exhibition centres at Olympia and Earl's Court, and the area round Peckham seemed popular. Nobody seemed to be commuting but then, in the early part of a Friday afternoon, hardly surprising.

The most intriguing of my fellow passengers was the young man wearing a rucksack, with a helmet crammed in on top, and sporting a huge coil of mountaineering rope complete with a couple of karabiners. He even seemed to have either a piton or an ice-screwdriver poking out of his trouser pocket. I wish him luck - the high passes of New Cross can be pretty tricky this time of the season and only a fool would tackle the north face of the Gherkin without sherpas.
Posted by AnthonyG at 6:45 pm No comments: