This Will Last A Lifetime! Snigger, Snigger

I've remarked before about how businesses feel they can twist ordinary words to make them mean whatever they want them to mean. There's another example today, with the news that top-selling SatNav company TomTom has decided to stop supporting certain models with its "lifetime guarantee" even though they are still widely on sale.

When you buy a SatNav you may (or may not) get continued support in the form of updates to the mapping software. Typically you are told you will continue to receive these updates for the life of the product. You may feel that this means for as long as the product remains usable. And of course this perfectly fair day-to-day meaning is not what the supplier means - he means that support will go on for precisely the length of time that he wishes to provide it and not a second later. And there is nothing you can do about it.

For a wonderful example of circular reasoning, here is the full explanation from TomTom's website about what they mean by "lifetime" of a commercial product:

"lifetime" means the "useful life" of a device: "ie: the period of time TomTom supports your device with updates, services, content or accessories. A device will have reached the end of its life when none of these are available any more."


So the lifetime is as long as they do updates and as soon as they cease then, miraculously, just at that moment, the lifetime of the product expires. The one defines the other. Or to put it another way:

Q: How long will you provide updates?
A: For the life of the product
Q: When does the life terminate?
A: When we stop providing updates
Q: And when will that be?
A: When the lifetime of the product expires  etc etc

I own a SatNav, not made by TomTom, and which did not come with any warranty about updates. I don't care. It's still accurate for all main roads and it's probably cheaper to replace it in a year or so than to buy a more expensive model that does have the "guarantee" which will then be deemed obsolete by the supplier a few months later. What I will not do is buy one that does have a "guarantee" unless they tell me how long that is going to be. In years and months, not whenever someone in their Tech Dept flips a coin and pulls the plug.
Posted by AnthonyG at 6:22 pm No comments:

Windows 10 - Has nothing been learned after 20+ years?

I have a modest home network - my computer, my wife's computer and a couple of printers. It's been going for some time under Windows 10. Today, wishing to print to one of those printers, I received the following pop-up message: 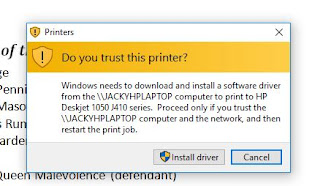 Do I trust this printer?

Hmm, I've never really liked the cut of its jib. It never really fitted in with the other devices, always seemed a bit of a loner. Had its own agenda, if you know what I mean. Did a reasonable job of printing but would I want to rely on it in a crisis, say if I was being menaced by two big men in a dark alley? I know nothing of its family background. It might be the unstable one, the one that nobody in HP ever talks about. Maybe its references were forged and it is living a double life, secretly faxing away in the small hours to destinations unknown.

No, I don't think I can actually say I trust the printer. But what the  **** has that got to do with anything at all? I am sending print information for it to print. All I ask is that it should print the pages then stop.

And if you think this is all about installing a driver and ensuring that it comes from a trusted source and therefore that Microsoft are justified in asking the question, read the first paragraph of this column again. I've been connected to this printer for many months. Any damage that it may have done has been done long away and the results no doubt filed away in a dusty cabinet somewhere in the bowels of GCHQ (under "T" for "Total waste of time").

It staggers me that after more than 20 years of using Windows to connect to printers, such a message should appear at all. How the hell am I supposed to check the drivers and security settings built into a printer? I have physically connected it to my network. That is all that the system needs to know.

I am so glad I don't do front-line IT support anymore. This is the sort of event that makes one swear in front of innocent young ladies, punch holes into walls (the flimsy kind you get between cubicles) and bang down tea cups onto desks crowded with papers without first emptying contents of same. Not good for one's image as the cool guy who fixes things.

[Anyone with fond memories of AnthonyG as "the cool guy who fixed things" is cordially invited to share them with us. Thanks: Ed]
Posted by AnthonyG at 6:05 pm No comments:

Do You Sincerely Want To Be Rich?

Two men  (let's call them Del and Rodney) survived a boating accident and ended up on a desert island. They reconciled themselves to surviving there, knowing that their chances of being rescued were slim. They had some fishing gear and were pleased to find one coconut palm under which they could shelter.

After a couple of days, during which each had caught a few fish and found it hard work, a coconut fell at the feet of one (Del, as it happens). He was delighted and was on the point of opening it when he had a thought. "This nut will be good to eat" he mused "But in the long run fish is better for survival. I could trade this to my colleague for some of his fish and enjoy a rest from fishing."

He offered the coconut and was pleased that Rodney was interested in it.
"I'll give you two fish for it" said Rodney.
"Three would be better" countered Del.
"OK, three, you drive a hard bargain".
The coconut changed hands. That night Del was happy to have three extra fish and Rodney turned the coconut over in his hands.
"This is great" he thought "I've a got a coconut worth three fish. What a fine investment".

The next day was hot and Del was thirsty. "Wish I hadn't sold that coconut" he thought "Maybe I can buy it back." But Rodney wasn't keen to sell until the price was upped to five fish. Del had to spend a few hours catching them but in the evening he was once more the proud possessor of a coconut. He was just about to crack it open when he stopped.

"Hang on, this nut is now worth five fish. That's a 66% increase in value since this morning. What a fabulous investment. I'm going to hang on to this, I could be rich in a week". Rodney was thinking "Five fish, what a brilliant result on my investment, I could be rich in a week".  The next day Del traded the coconut for nine fish and bought it back later for fourteen. He had to make it a deal in virtual fish, or fish futures, as they called it but he didn't care because he assumed he would sell the coconut back for even more fish futures in the future.

After two weeks the coconut was worth 150 million fish futures and each man was so rich he ceased to fish altogether (why work in the hot sun when you are a millionaire?). They lazed about, occasionally trading the nut and fish futures for ever more ridiculous amounts, were discussing setting up a payments system based on the coconut (or on individual hairs, priced at a very reasonable 40,000 fish each), utterly failed to notice a ship on the horizon that sailed on by and eventually died of starvation. But they died rich, that's the point.


--*--
No resemblance with any real crypto-currency is intended. This column is not making any specific investment recommendations and if you lose money buying coconuts or fish futures, that is your lookout. As indeed it is if you buy any artificial "currency" knocked up by some wideboy in his shed and marketed to you as "The next big thing, everybody's buying it, don't miss the train".
Posted by AnthonyG at 6:36 pm No comments: