I made my usual journey to Waterloo yesterday morning, returning to beautiful Ruislip late afternoon. Trains were fine, though crowded on the homeward leg, weather most pleasant, nothing to report really. Except that this was the first "working" day since the Games began on Friday evening and was my first chance to see how the system would cope.
The morning inward leg was a typical summer's day, noticeably fewer people actually going to work more or less balanced by tourists. Coming home, as usual whilst waiting for a Met at Finchley Road the Jubblies were shuttling through at the rate of about 3 every 5 minutes, so full marks there for the service to Stratford. The Mets were full, almost everyone seemed to be a non-native and many debarked at Wembley Park so I guess they were all games-goers, but there was little sense of it. No flags or scarves in national colours, no chanting, no flaunting of approved sponsor products (or guiltily hiding away of offending materials).
So from this utterly non-representative sample, I can report that the Tube is coping well and Londoners can go about their business much as usual. This has been AnthonyG for Ramblings, somewhere in Ruislip, and now back to the studio.
Posted by AnthonyG at 10:29 am No comments:

A few hectic days away, in Dorset and Yorkshire, have provided a nice counterpoint to the normal semi-commuting routine. One reason for this was to chauffeur Mrs. Commuter as she managed a major tour by the superb young "Arakaender Bolivia Choir" who obtained rave reviews as they performed long-lost music from the days of the Jesuit missions to South America. In York, always a good place to visit, the heavy rains of recent days flooded the River Ouse so rapidly that a riverside path that was mainly dry in the morning was under two foot of water later that afternoon. 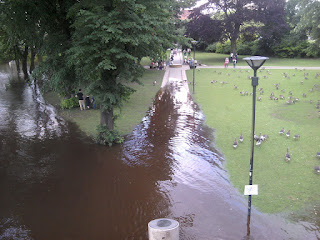 And here is that self-same path - the water on the left is also floodwater, rather than the normal riverbank.  At least York is built to withstand flooding - all the properties along the river bank are raised and there was headroom under the bridges - but of course many other towns have suffered.

The tube seems to be coping ok during this extreme weather, although, thanks to my non-commuting day yesterday, I managed to avoid a system failure at Hillingdon possibly caused by a lightning strike on the electrical power supply.  The new "S" stock trains now supply the bulk of the Met's rolling stock and sightings of the old A60s and 62s are becoming rare but the new trains still can't take advantage of the promised new signalling systems. Every morning journey into Baker Street recently has been dogged by slow running and stoppages between stations. The evening runs have been fine. But my word, the evening trains do get crowded.

And now a note about the future. My office is likely to move north of the river in a few months and I will cease to use the Bakerloo. No regrets about losing the jammed evening trains but it has been a remarkably good service over the past 6 years. Instead it looks like my Met journeys will be extended beyond Baker Street toward Moorgate, an itinerary I used to do many many years ago whilst a young accountant. So it will be farewell to the deep tunnels and a warm welcome to the ancient cut and cover of the world's oldest underground system.  [Sounds romantic - I'm looking forward to it: Ed]
Posted by AnthonyG at 10:45 pm No comments: