I think this must be the most far-flung piece of spam I have ever received. All the way from sunny Chile (or possibly, very wet and cold Chile, depending on where they are based), I have been sent this pleasant message offering a plethora of motoring services 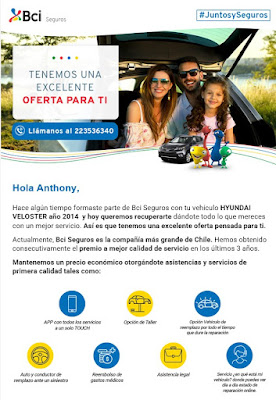 I did use to own a Hyundai car. I sold it four years ago. I do not, and have never, lived in Chile. In fact, I have never visited any part of South America. So, being told by the biggest service company in that country (if my rusty Spanish is any good), that they are eagerly seeking my business in looking after a vehicle I do not own, does seem rather bizarre.

I'm not sure if data protection rules have been broken.They have written to an email address that I never used when corresponding with the dealer from whom I bought the car. So it is probably not a case of them getting the details from some sort of worldwide database of ex-owners.  I did however, once, mention the word Hyundai on this very blog. Maybe a rather stupid bot tried to put two and two together. Or maybe they bought an email list from a rather dodgy vendor.

Anyway, it's good to know that there are some trusty amigos some 7,200 miles away and I shall file their details just in case, oh, I don't know, Hyundai make me their ambassador to Chile (I'm still waiting for Johnny Walker to get back to me), fly me over there, hand over a brand new 4x4 and say "Ahí tienes, amigo, ve a donde quieras, todo está en nosotros", and then as I burn my way down the B451 in search of a tea-room, there is a nasty rattle from the engine, and I pull over and think "What now? Oh, I know!!!"

Posted by AnthonyG at 5:25 pm No comments:

My most recent piece mentioned the Queen, in the context of her appointing the 15th prime minister of a long reign. That seems now to refer to a different epoch.

The pictures of that meeting showed the Queen looking distinctly smaller and frailer than before, with a livid black bruise at the back of one hand. Yet she was on her feet and fully lucid as she invited Liz Truss to form a government.

Two days later, without warning, the BBC interrupted their normal lunchtime coverage to commence a rolling news broadcast in which they had but two slim facts to report on: - The Queen was "under medical supervision and was comfortable", and that her family was gathering at Balmoral. No further medical reports were issued during the afternoon, and the media incessantly interviewed anyone at all who either knew the Queen, or knew something about her, or who had once been to Scotland on holiday and very nearly got to Balmoral, only the coach broke down, but if it hadn't they would definitely have seen, with their own eyes, a policeman on duty outside.

Nonetheless Mrs C and I watched because it was clear that this was not a minor illness, and at the age of 96, pretty well anything is serious. There was also a story about notes being passed to senior Ministers and Opposition members of the House of Commons in the middle of  a debate. We saw footage of aircraft arriving at Aberdeen bearing members of the royal family and there were endless shots of vehicles going in and out of the, now heavily guarded, entrance to Balmoral.

Soon after 6:30pm the media was cleared to bring us the announcement that we dreaded and the nation plunged at once into mourning.

I am not a monarchist. Reliance on the hereditary principle has at times brought this country into a perilous state - the most recent being the near-fatal influence upon the weak Edward VIII by the Nazis. But the Queen, and her father before her, have undeniably served the best interests of the country and her passing is a source of deep sorrow. Charles, so often seeming a little gawky and out of place, has neatly slipped into his new role. His heir seems to be a thoroughly good egg. If we are to continue with the monarchy then we can do so with a fair amount of confidence.

I am pretty confident that many of the overseas "realms", such as Canada, Australia, Jamaica, Belize, Papua New Guinea and New Zealand, will move towards becoming republics, free to do so in the knowledge that they are not distressing the Queen. This will not diminish Charles; it will correct a huge historical anomaly.

The many tributes the world over have been touching and trigger unexpected emotions. I think the funeral of the Queen will be similarly cathartic. Afterwards I look forward to a "slimmed down" monarchy and, perhaps, a debate about the nature of the British state.

Posted by AnthonyG at 6:47 pm No comments:

It seems a long time ago that I commented on the inevitable collapse of the shapeless government led by one B. Johnson, classical scholar, bon viveur and part-time MP for my constituency of Uxbridge and South Ruislip. After an interminable summer of electioneering, the results of the vote for his successor were revealed yesterday. The ex-Foreign Secretary, of whom I know very little, Liz Truss, is the one going up to Balmoral today to have a cup of tea with HM and then move into No. 10, to face a daunting in-tray of problems.

Whatever may befall, the simple pleasure of having a leader with a surname that rhymes harmoniously with many other words cannot be denied. Almost without having to pause for a refreshing cup of tea, I managed to jot down the following:

A voice from the back of the bus
Enquired the cause of the fuss
"It's goodbye to Boris
That expert on Horace"
"Replaced by?" "A lady called Truss"

I am sure other and better ideas will flow in the weeks to come.

The Punch-up - really, really up

What the BBC do not know is that we have secured access to the black box.

Female voice "Encore un café, messieurs?"
Male, identified as Captain Dubois "Merci, Charlene. Tu est très sexy aujordhui"
Charlene "Merci"
Male, identified as First Officer Blanchet "Hein, Dubois, Charlene est avec moi ce soir"
Dubois "Vous pensez, huh?"
ATC "Flight AF 32, turn right 275 and ascend to twenty two thousand feet, take flight path VH to Lyons Outer"
Blanchet "Turn right 275 and ascend to twenty thousand"
Dubois "He said twenty two. What are you, deaf this morning?"
Blanchet "I said twenty two. And you asked for 30, 000. Tell him you want 30, 000, or are you too scared?
Dubois "You tell him yourself, it's time you did some work around here instead of ogling the cabin crew"
ATC "AF 32 please confirm route guidance"
Dubois "He's made a mistake but he won't admit it"
Blanchet "If I wasn't choking on the pong of your cheap pomade, maybe I could think more clearly"
Dubois "At least I don't reek of a Montmartre whore's boudoir"
Blanchet "Then move your wife out of Montmartre"
ATC "AF 32 urgent, confirm your route"
Blanchet "Alors, mon 'capitaine'"
Dubois "It's not my turn"
Blanchet "It certainly is not mine. You tell him
ATC "I'm not getting involved. Sort it out"
Dubois "Oooh, hark at him. As if I could 'sort" anything with this ape
Blanchet "ATC, Capitaine Dubois est un cochon grand, n'est-ces pas?
Dubois "You take that back"
Blanchet "Who is going to make me? You and whose grande armée?
Dubois "Moi. Seul"
Blanchet "Oui? Viens ici si tu penses que tu es assez dur

the recording becomes too indistinct after this

It won't last. It can't last. Nobody assumes for a second that we will even be in the top 10 at the end of the season. But right now, after five games played, Wealdstone FC are top of the National League. 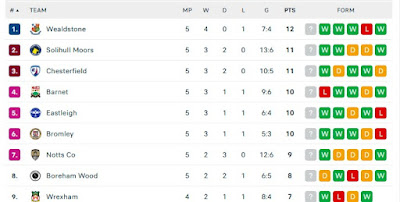 I am putting this magic moment on to the internet to be preserved for as long as my good friends at Google maintain the Blogger website. Further down the table are heavyweights like Chesterfield, Notts County and Wrexham. But what of them? No Stones fan tonight could give a toss.

For the record, the Stones beat Bromley, lost to Eastleigh (on the hottest day of the year), then demolished Oldham, Halifax and today Gateshead. They have the smallest playing budget in the league and are the only team to be part-time.

The last time this club were in a similar position was in 1985 when they won the predecessor to the National League, the Alliance. But the National is a very different league. Then, all the teams were part-time. All had only experienced non-league football. Today, with automatic promotion / relegation for two teams each season, at least half of the league have experience of the Football League, and have grounds, facilities and budgets to match. In reality, this is the best position that Wealdstone have ever been in their 120 year history. So you may forgive me a little bit of gloating.

Posted by AnthonyG at 5:22 pm No comments:

That's it. Finished. This evening I made my final commute on the Bakerloo up from Waterloo to Baker Street, thence to catch a shiny new ...