May I just check your Oystercard, Mr. Bond?

An advert in the train has the strapline "What is the date of birth of the person sitting on your right? You have three stops". The logos at the top read MI6 and SIS. I say logos but since these are the initials of the British Secret Service, one can hardly think that they form part of a brand recognition programme. They look like something knocked up by Moneypenny in Wordstar 3.0 during her lunchbreak.

Anyway this is a recruitment ad and they want people in search of an interesting career to apply. All so different from the cosy world of the past where promising young men would be approached by their tutors at University and given the chance of a lifetime to explore their latent homosexuality and then spy on behalf of the Russians.
[added a few days later]
Here at last is the ad, hastily snapped on the Bakerloo just before everyone crowded in at Piccadilly Circus tonight. 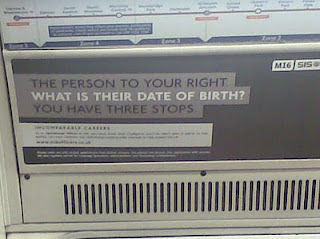 Regular readers of this blog [you what?: Ed] will know that I heartily dislike advertising in all forms. I had a lot of fun a while back when Tesco, wishing to apologise for a problem with petrol at some of their filling stations, ran an ad that began "We would like to promise...". Now Toyota, widely pilloried for a fault that makes some cars accelerate unexpectedly, has run full page ads in which they explain how they will put things right. Trouble is, the PR merchants have got in and as usual screwed the whole thing up. They cannot possibly let their company admit to a fault that needs fixing. The ads refer throughout to an "upgrade", and how Toyota have trained hundreds of technicians to perform the "upgrade" and how they are now "upgrading" 6000 cars a day.

Scene: A plumber calls at a house
Plumber: Morning madam, you phoned for help?
Lady of the house: "Oh, yes, I've got a leak in a pipe"
Plumber: "Ah well, I'm sure I can upgrade that for you. I'm specially trained to perform these upgrades you know. When I've finished you will be able to enjoy a whole upgraded non-leaking pipe situation which will take your domestic plumbing arrangements to a new level"
LOTH: "Yeah whatever"

And so on. This morning I once again had a bad journey on the Met due to signal failure near Finchley Road. No doubt the system will be upgraded for my return journey. Or maybe they will just fix the fault.
Posted by AnthonyG at 5:41 pm No comments:

The Met is running below par at the moment, whilst they rebuild platforms at Baker Street in readiness for the new trains. Platform 1 has been extended and is not yet operational, and they have cut the Uxbridge service. The through trains from the city are running as usual but they are always crowded. I always go for a train that starts at Baker Street whenever possible, knowing that this guarantees a comfortable seat. Without this fallback I am currently forced to take the first available train and change at Harrow.

Last night was fairly typical. First two trains out were Watfords. Got one starting at platform 4 (so nice seat) then waited 10 minutes at Harrow. Not much fun really. And Harrow still has the ancient indicator boards that merely tell you the destination of the next train. At the three next London-bound stations the indicators are the modern type informing you of the next three or four trains with arrival times. I am amazed and baffled that Harrow, one of the most important stations on the Met, is stuck so defiantly in the early twentieth century.

I learn from the invaluable District Dave forums that Platform 1 at Baker Street will reopen on 28 February (this information is not available to the general public). Let's hope they begin running a normal Uxbridge service again.
Posted by AnthonyG at 12:20 pm No comments:

This morning, the first London-bound Met at my home station has Harrow as its destination. This means it is going out of service there, an indication of a problem either with the train or further down the track. But nobody announces anything at the station. The driver remains silent. I board it, hoping that I can simply change at Harrow and continue as normal. We reach Rayners Lane whee one can take the Piccadilly as an alternative (though it takes 15 minutes longer to reach central London). There is no announcement. We arrive at Harrow where they now tell us that the train is going on to Wembley Park but no further due to some problem in the city. They make it pretty clear that there may be no more southbound trains, and if there are, well it's nothing to do with them and why don't we just take the Jubilee from Wembley Park instead. Yeah, great, 500 people packing into an already full little train. I've stood at that platform in my time, waiting for a reasonably empty Jubbly. It is an exercise that puts iron into the soul.

I considered going back to Rayners for a Picc but of course there were no northbound trains either. The people with the best idea were the hundreds packing the Chiltern Line platform who eventually all crowded onto a service for Marylebone. Then they announced that a train to Baker Street was coming after all and I got it and got to work ok (just 15 minutes late so I might as well have taken the Picc anyway had I but known). Aye, there's the rub. They really don't like telling you what is going on, do they?

Now you might say, ah, this problem occurred too late for the info to get out. But I refute this thus - not only was the problem obviously known to the driver of my Harrow bound train, but on the way south I counted no less than 9 - NINE - empty Mets waiting motionless on the fast track or queued up at the siding into the Neasden depot. So the problem had been known and acted on for about half an hour at least before my train arrived.

I used to moan about the Piccadilly being simply awful at communications, apart from when they could inform us, with tears of joy streaming down their cheeks, that due to problems at Arnos Grove (20 bleeding miles away), there were no services on my branch for the forseeable future if ever. Please, Met, don't go down the same hellish path to perdition.

On a brighter note, on our crowded homeward train (services are reduced as they do some incomprehensible repair work at Baker Street), the driver welcomed us all to the Metropolitan LIne, said we would travelling at normal speed and then requested those occupying seats to give them to the more deserving. Some hopes. Not a soul stirred. Nor did I. I had squeezed into a seat that others had disdained, due to the bulk of the man on one side, and I simply couldn't face the idea of standing for the next thirty minutes. These, my friends, are the joys and agonies of commuting today. Thank you. My assistants will now pass amongst you with hats. Please give generously.
Posted by AnthonyG at 10:17 pm No comments:

A cluster of unfortunate events

The Metropolitan line is having a bad patch. Several days of delays due to the usual reasons but it has suddenly worsened. Last night no service (person under a train at Finchley Road), this morning a problem at Uxbridge and, incredibly, my train then held at Wembley Park for 4 minutes because it was "early". I scanned the TFL website when I got to work and there are no trains between Wembley Park and Aldgate because of emergency engineering work at Baker Street. Odd this, because the Circle is also down with emergency work at Barbican.

The service is really odd anyway because they are doing something to the platforms at Baker Street to prepare for the new trains and I no longer recognise any of the train numbers during the morning. This morning they have put up a new barrier extending beyond the edge of platform 1 - not sure if they are actually lengthening the platform or if it is just a safety precaution.

Next week through trains will not stop at Baker Street. Trouble is most of the trains in the morning are through trains. So more buggering about will ensue. At least there is always the option of changing to a Jubbly at Finchley Road, if only they were not so crowded.
Posted by AnthonyG at 1:18 pm No comments: