The Tube on TV

A new series of six 1-hour programmes about the London Underground has started on BBC2. In the first episode they showed some of the worst features of passenger behaviour at night and weekends, contrasted with the cheerful maintenance men at Ruislip depot and the engineers working frantically over a weekend to replace a section of track at Harrow. This last segment had a special meaning for me since I travel over that piece of track every time I go into London. It's reassuring to hear the crew reckon it should be good for another 40 years use.

It was also revealing to see the pressures on the staff at Leicester Square, trying to sort things out after a stabbing and a woman flung onto the track (not electrocuted or hit by a train, fortunately) and faced instantly with huge numbers of people unable to travel as planned.  The police decided to close the station but it was the staff who had to explain it to the throngs milling about outside.

The funniest piece was on the sleepers on the last train to Morden - passengers who had dropped off on their way to somewhere else and who were woken (very gently, or was that due to the presence of the cameras?) and informed that they were now miles from anywhere and the pleasures of the night buses were awaiting them. This is so regular an occurrence that a standard routine has evolved for those who refuse to wake up - you move their luggage a little and they automatically stagger after it.

This looks like a well-made and balanced programme and I look forward to learning more.
Posted by AnthonyG at 10:41 am No comments:

My opinion is that the Metropolitan line has been fairly good in recent months; many others disagree and my local paper ran a story, quoting me as a typical commuter or something, which I no longer am, on the basis of a report that the Met was getting far more than a fair share of customer charter refund claims for delays.

So with that in mind, I breezed down to my local station yesterday to make my normal journey to Waterloo only to encounter a notice that the Met was entirely suspended south of Harrow, as was the Jubilee. The culprit was engineering works at Neasden depot, thus snookering both lines comprehensively. I resorted to my first fall-back, the arthritic Piccadilly and some 20 minutes later than planned, and lower back aching somewhat from the soggy seating, emerged into the South London murk.

Coming home that night there were posters apologising for the suspension, described as "unacceptable" and a promise of automatic refunds to Oyster card users. This is a step forward, though I am baffled how they will know who to credit since many may have used different routes altogether and so cannot be selected for refund - presumably they must make manual claims.

Anyway, one bad journey should not change one's opinion so let us see if the unacceptable is more than just a form of words but translates into action.
Posted by AnthonyG at 4:35 pm No comments:

The mangling of statistics

I don't commute as much as I used to so there is more time to study the web. This morning a story about Sainsbury's changing their advice about when to freeze food, on the BBC news site, caught my eye.

"The average UK family wastes up to £50 worth of perfectly good food a month."

Sorry, but the author of this sentence. and it is not clear who is the author, is writing nonsense. Either "the average family wastes £xx" where average denotes either the arithmetic mean of families sampled or the median (but whatever it is, you should tell us anyway) Or "some families waste up to £50". But you cannot have "up to" being the maximum in the same phrase as "average". If you still don't get this point, and would like to, consider this sentence:
"The average Premier league footballer scores up to 38 goals a season". Obviously some footballers, a small number one imagines, might score a lot of goals. The average footballer must score a lot less given that teams play roughly 50 competitive games a season and 1 or 2 goals a match is a reasonable amount to get. So this sentence is simply wrong.

The horrible wording that gets me angry is "up to". Everybody uses it in adverts when they are trying to lie. Broadband suppliers talk about speeds "up to " 24mbs or whatever, utterly meaningless because if you are considering switching the only speed that matters is the one you will get. Comparison  and insurance ads talk about savings "up to" some figure that they never explain. And now the BBC has joined in.

When I am King, anyone using "up to" without fully qualifying what they mean, in text at least as large as the headline, will go to the Tower, will go directly to the Tower without passing Go and will stay there until they pay a fine up to £25,0000.

The meaning of 0 degrees 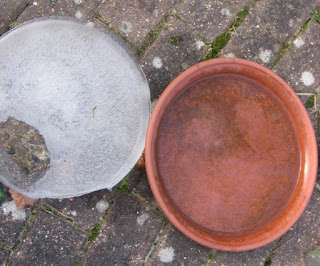 The disc of ice on the left came out of the saucer this morning. I refilled the saucer with water (for the benefit of birds, not one of whom subsequently bothered to come into the garden, but I digress). Some time later, with the temperature on our garden thermometer reading exactly 0c, the ice was intact and the water still liquid. Funny stuff water.
Posted by AnthonyG at 11:12 pm No comments:

I don't travel into London as much as I used to so am a little more tolerant of the foibles and irritations of the Tube experience. Yesterday, sadly, was a reminder of what I am happy to put behind me. In the morning we were delayed due to a stalled train at Finchley Road. In the evening, earlier signal failure at Ruislip and an ongoing problem on the Piccadilly made for some ominous announcements but, fortunately, I did not have to wait too long - in the freezing Harrow air - for an Uxbridge bound Met. It continues to irritate when they announce "Severe delays" without giving an indication of how many trains are running and what the average interval between them is. Having an internet app on the smartphone that reads and displays the departure info is a godsend, but even that packed it in for a while when I arrived in the evening at Baker Street. Once it came back it was clear that the intervals were not a problem and the delays not that severe at all.

The current very cold (but very dry) weather focuses the mind when there is a choice of trains. Standing around at Harrow is fine on a balmy Autumn evening with a rosy sunset glow adding lustre to the warm air [Keats? Tennyson? Give us a clue :Ed]  but a pain when it is a few degrees below zero and the icy winds are whipping across the North Sea direct from Novosibirsk. However it was minus 20, or something similar, in Munich today and two of my work colleagues are off there. There's always someone worse off isn't there?
Posted by AnthonyG at 6:44 pm No comments: