Election 2017: The one we did not see coming

The Prime Minister, Theresa May, had an announcement to make before the press in Downing Street earlier this week. Nobody knew what was intended. Her decision to ask for a dissolution of Parliament and to hold a General Election in early June was a genuine surprise.

This is an election that feels wrong. The Parliament of 2015 is sufficiently fresh to be representative; the one-off Referendum on EU membership notwithstanding. May seems to be determined to remake the Conservative Party in her own image rather than to care much about what is right for the country.

I suppose I had better keep an eye on things though I have an uneasy feeling that after all the soundbites, the pointless TV coverage of politicians visiting factories and shops, schools and hospitals, the sloganising and the desperate search by the media for the story of the day, we will be left with a Parliament pretty similar to the one we have now.

We do know that it will no longer be graced by George Osborne, one-time Chancellor, who is retiring (for the moment) nor by one N. Farage, who has decided not to undergo the humiliation of another trouncing at the polls and is not going to stand. And that is about all we do know at present.
Posted by AnthonyG at 11:34 pm No comments:

There's gold in them thar pianos

The news story was fascinating enough - a hoard of some 913 gold sovereigns packed inside a piano, discovered many years later by a tuner and subsequently declared as Treasure (and therefore Crown property, albeit a reward will go to the honest folk who declared it).


Are you thinking what I'm thinking ...?


I take up my pen in this year of Our Lord 20--. T'was in the spring, just as the daffodils were a-dying back and the new lambs gambolling in the meadows that the piano tuning man came to stay at my father's inn. Times were hard and we never turned away a customer, not even a musician. He hoisted his great black tuner's bag on the counter and requested lodging.
"Show him to the best room" said my father and I beckoned the old man to follow. Once in the room he grasped my wrist
"I bain't got much time, younker. See here, I knows where there's gold, gold a-plenty, but I'm too old and infirm to go find it. I need a bright young lad to seek it out and I'll give 'ee a full tenth of all that ye bring back"

I was much amazed at his talk but said nothing. He reached into his bag and pulled out a gleaming tuning fork which he pointed at my heart.

"Swear to be true and not to cross me or this will sing to you and no mistake". I had no wish to have the fork pinged against my ear and did as he bade. He relaxed then and unfolded a grimy newssheet. "Now then" he said "This is where it is. Stuck down the back of this here piano over in Shropshire. If you goes there and says it was you what put it there, why they'll give it thee, and you bring it back here to me."

"But sir" I ventured "Why should they believe me? This says the gold is many old coins, which surely someone of my age would never possess"
"I'll tell 'ee the way of it. You shall don this here piano-tuner's hat and this here piano-tuner's cloak and shall walk with a stoop and a quaver in your voice, and hold your tuning fork like this, and say you hid the gold many years ago for fear of foreign invasion."

His plan seemed fairly sound and so it was that I set forth on the quest of the golden treasure of Shropshire. But how I fared is a story for another day...
Posted by AnthonyG at 7:19 pm No comments:

I thought this was a belated April Fool story but it seems to be genuine. A scientific study on why shoelaces come undone, even though they have been carefully done up, shows that this is a natural result of the impact of shoes on the ground when walking and the forces operating on the laces as they move about.

Now I have long held this to be the case and not, as Mrs C is wont to insist, on my inability to tie them correctly in the first place. Henceforth I shall be proud to consider myself as adding to science when, no more than a few paces into a stroll down the road, one of my shoes works loose. Any researchers looking for a volunteer to assist in further studies (assuming that expenses are paid and luncheon vouchers provided, naturally) are welcome to get in contact.
Posted by AnthonyG at 9:42 am No comments:

As seen in my local supermarket (in Ruislip, of course) 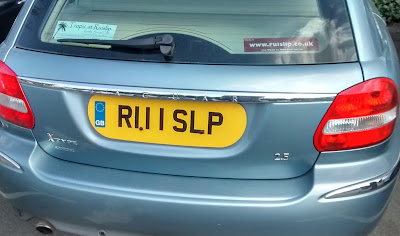 I must confess to feeling a tad envious of this one.
Posted by AnthonyG at 11:29 pm No comments: