This ad pops up regularly when I browse through a certain well-known media website. It is oddly fascinating but, as you will have to come to expect, for the wrong reasons. 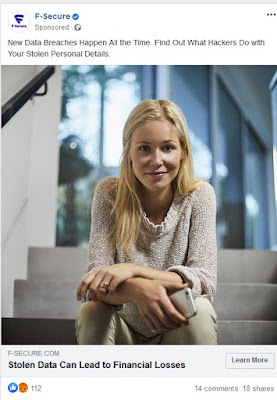 F-Secure is one of many tech firms supplying security related software. I have never used them but have no reason to doubt the usefulness of their products. This is, of course, irrelevant to my interest. For, as is sadly common with this sort of ad, nearly the entire content is taken up with a picture. They could have used this space to explain more about what they did, why their stuff works and perhaps how much it costs. Nope. A full two-thirds of the space (and they are paying the said media website for the privilege of clogging up my timeline, remember) is the image of an attractive young lady smiling warmly at the camera whilst perched, a little coyly, on a flight of steps in some office or maybe a flat.

The young lady is not named or identified. She is dangling a smartphone but seems much more interested in whatever the cameraman might be saying. "Come on darling, undo a couple of buttons", perhaps. And hence, rather than click on the ad to find out more about the benefits to my online security from investing in F-Secure, I naturally ponder about this female (remember, she is worth twice as much as the contents of the ad). A number of possibilities suggest themselves, viz:

And now see why I love this ad. Every time I see it, I add another line to this list. In the long winter evenings I intend to take it out whilst I sit beside the fire and look it over approvingly, making the odd emendation here and pencilled note in the margin there. With such a feast of entertainment, my time for exploring the more risky corners of the Internet will be greatly reduced and hence my risk of stolen data will be minimised. Job done! and I didn't even have to buy the software.

Posted by AnthonyG at 2:21 pm No comments:

I don't know why, but I found something endearing about this story on the BBC website yesterday.

The hacking event was serious, involving misuse of the credentials of a number of very well-known people. Somehow, one expects the perpetrators to be a sinister gang of Russian or Ukrainian hackers, perhaps led by a bald gentleman who strokes white cats whilst issuing his softly spoken orders to inflict mayhem on the world in order to bring about the end of civilisation, or something. One does not really expect the trail to lead to a small bungalow with sea-shells embedded into the walls and a plastic model windmill on the front lawn, in a quiet street with a friendly corner newsagent who sells beach umbrellas and flip-flops and where the distant smell of seaweed wafts invitingly up from the beach.

I wonder how the local newspaper will play this one -
"Local man displays world-beating tech skills" perhaps or "Hacking: Littlehampton trounced again".

"He was a quiet lad and we thought some clerical job might have suited him best" his old form master will say "He clearly had hidden depths and I'm pleased that he might have got his start from St Merridew's."

The neighbours will, of course be quoted as saying "We never would have expected it. He was such a quiet man, always kept himself to himself. We always thought he would turn out to be a serial murderer. Who ever would have believed he was up all night on his computer, I mean what kind of normal person does that?"

And when that case gets to the local magistrates court, how many times will the beak peer over her horn-rimmed glasses and murmur to the prosecuting counsel "Remind me again, Mr Jefferies, what is Twitter?"
Posted by AnthonyG at 11:25 am No comments: