The Web and the Taxman

Does the taxman really understand IT? I ask because of the following experience in completing my wife's tax return on her behalf. (For those inexperienced in these procedures, everything is handled on-line).

1 - I wished to download the completed return and the calculation of tax due. Both documents were saved by my browser with "PDF" as a suffix but without a "." in front of it, so they failed to open automatically when clicked upon. I corrected this but inexperienced computer users would be fazed and frustrated.

2- At the end of the process there are four options as to where to go when leaving the tax return section of the HMRC website. There isn't one to close it all down so I chose the next best - "Return to Self-Assessment Home page" and got a "Sorry, the link you have followed does not exist".

The actual completion of the tax return is straightforward and the Revenue have done a good job with asking all the questions first so that the right pages can be presented. But there does seem to be something lacking. Like actually testing it all.
Posted by AnthonyG at 5:42 pm No comments:

The Curse of the Scam Caller

I haven't had a scam call for a while. Plenty of silent ones, where, when you pick up there is nothing there at all, but today a genuine attempt was made to penetrate the defences of the Ramblings system. The caller was from "the technical support of Windows" and he was really terribly worried about some problem on my computer (he read his script so fast I couldn't follow all of it). I asked him if he covered all versions of Windows. He said he did. I said that was good because I was running Windows 2 on an Amstrad 256PC. He wondered how I was able to connect to the Internet at all (Quite well informed by the usual standards of these people). I said it worked just fine. He called me a liar. I politely informed him that that was precisely my opinion about him and the conversation was terminated.

Thus far, nothing exceptional. But a few moments later my internet connection went down. Funny, I thought. It came back. Then it went down again. And came back. After a couple more interruptions it seems to be back to normal.

Pure coincidence, of course. Yet a little bit unsettling. Was my friend managing to emit some sort of vibration that interfered with the digital signal on the telephone line? Was he, and perhaps a few of his colleagues with nothing else to do, crouched over a little effigy of your correspondent, sticking pins in and chanting weirdly in an ancient tongue? Or did he shrug, cross my name off the list and go on to the next victim?

If you have had a strange experience immediately after disappointing a scam caller, do please let us know at the usual address.
Posted by AnthonyG at 12:54 pm No comments:

Back on the Bottle 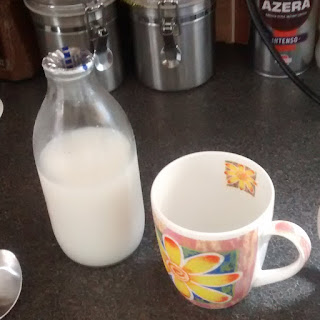 Here's something that I never thought to see again. We succumbed to the persuasion of a salesman to try having our milk delivered to the doorstep and the first pint has arrived. It has been a long while since we had milk in glass bottles with silver foil tops. Pushing the finger in to free the top prior to prising it off without making a hole and spraying oneself - ah, there's a skill that might have rusted into disuse but, fortunately, the old training and years of experience kicked in and I poured my first dollop into a waiting cup of tea with what I can modestly describe as utter and total success, non-spillage wise.

It does seem strange to have a glass bottle in the fridge instead of the plastic that we have become used to. When I was young the milk arrived daily at almost all houses and the empty, washed, bottles went out on the front step. In beautiful Ruislip it has been many years since I saw either bottles on anyone's step or a milk-float making door to door deliveries. Presumably, if my neighbours adopt the same course as ourselves, these sights may become commonplace once more.
Posted by AnthonyG at 9:54 am No comments:

A tomb without a view

Art, and what makes something worthy of being called art, is an endlessly fascinating topic. I have previously ruminated on the strangeness that permits anyone to call themselves an artist and then automatically define anything that they do or create as art - and have this con accepted by others. We have a wonderful example of this intellectual arrogance in today's Guardian where my eye was unerringly drawn to the following story:

Best place for him, you are probably thinking. Shame it wasn't under a quiet road out in the bush then there would have been less disruption to traffic while they excavated the hole, inserted the steel box (and the reclusive gentleman) and then replaced the surface leaving but a slender air-pipe to keep him alive.

Why do such a thing?


According to organisers of Dark Mofo, the artist’s stay underground is a “response to 20th-century totalitarian violence in all its forms”.

I'm sure that all of us, other than dictators wearing silly uniforms, will agree that we are all dead against 20th-century totalitarian violence. Actually, I am prepared to go one step further and hereby proclaim my total rejection of 21st-century totalitarian violence as well. I'm also (and here I know I am so far ahead of my fellow artists that it will be years before my genius is recognised) not at all happy about 18th-century absolutist violence and don't get me started on certain murky goings-on in the later part of the Bronze Age.

Practitioners of 20th-century totalitarian violence are, doubtless, cowering in their bunkers and preparing their monorails for an emergency getaway before our man is hauled up on a freezing Hobart night in front of a vast cheering crowd and starts his encore (I don't know, putting a bag over his face for ten minutes as a response to the price of chewing gum, or something).

What will he be doing whilst underground in total darkness and the buses and trucks rumble overhead?

OK, so not in total darkness. And not in total discomfort as we also learn that a small heater and a thermos (contents not specified) were taken in before the tarmac went back on. So just a long lie-down really. Well, we can all do that. Last night I spent some eight hours lying on my back in near-total darkness with only my wife for company. I fasted for the whole of this period without even the comfort of a well-filled thermos. This morning I ate two slices of toast with marmalade to indicate my total rejection of religious discrimination in 13th-century Spain and drank a cup of tea to indicate my solidarity with the struggles of the Aztec peoples to be free to cut out the hearts of anyone they didn't like very much. Turner prize, here we come.
Posted by AnthonyG at 10:15 am No comments:

I (and probably you as well) have been receiving a stream of emails and letters from businesses about their privacy rules and procedures. This has been prompted by tough new legislation from the EU. Obviously this column does not want to fall foul of the dreaded Euro-Commissars breaking down the door at 4 am and shouting "Your papers are not in order; for you, Britischer schwein, ze blog is over" and so here is our privacy statement. Like all the other notices I have seen it is, of course, incredibly important and urgent and essential even though, like all the others, it does not actually require anyone reading it to do anything.

Your privacy is important to us:- We promise not to disclose any of your personal information. Since we do not actually hold any personal information on anyone this is a pretty easy commitment to keep and we already intend to set up the Annual Ramblings Awards for Jolly Well Keeping to our promise, with a guaranteed prize of a nice cup of tea to the wonderful people responsible.

How we store your personal information:- we don't actually have any (see above) but if we did then it would go into the back of the filing cabinet under R (for "Rather important").

Who is responsible for storing your personal information safely:- All information (not that we hold any, I hasten to add) is under the control of the Editor and, if any criminal prosecutions were to be brought for misuse, then he is the person to be fingered to the rozzers. Nobody else. OK? [I think we need to discuss this: Ed]

How to find out what personal information we may hold on you:-  Write to the usual address and make it worth our while to go digging into the filing cabinet. We promise to reply just as soon as we can be bothered.

How to find out more:- Don't bother, that's all there is.

Posted by AnthonyG at 9:55 am No comments:

Exclusive - England at the World Cup 2018

We brought you, several weeks before they happened, the highlights of England's magnificent run in the 2014 World Cup, in which the lads came oh-so-close to a place in the last 16. We covered, several days in advance, the fantastic, nay, incredible, performance at the Euros in 2016 when only the world-beating Icelanders were able to bring an end to our hopes of English hands on that trophy. And now, with the 2018 World Cup just days away, you don't need to waste your time watching or reading about it for, once again, we tell you everything you need to know about :-


England's Road to Glory
as told by our special correspondent1